Russia turns to soft power in the Middle East

While Russia is most commonly seen as a hard power state, regional developments since the Arab Spring have positioned it as a soft power force. 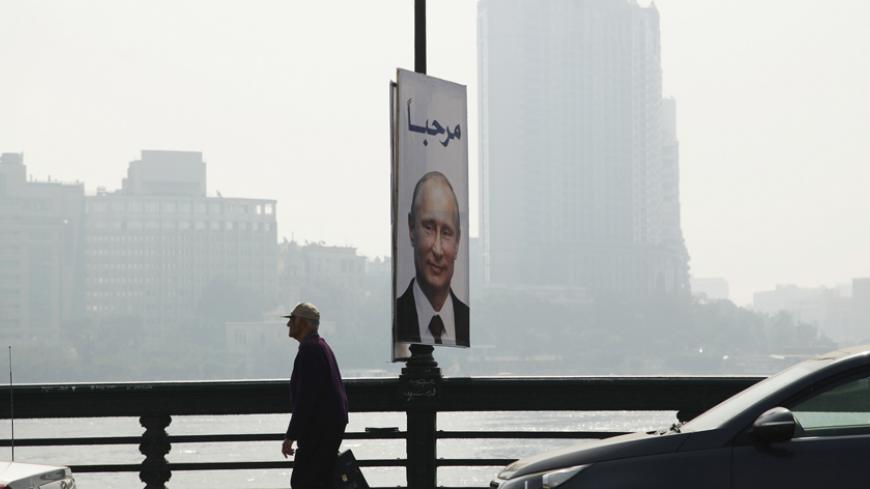 A man walks past a banner with a picture of Russian President Vladimir Putin along a bridge, in central Cairo, Feb. 9, 2015. - REUTERS/Asmaa Waguih

Russia’s image in the Middle East is that of a tough state with a rigid authoritative political rule and an inclination toward hard power in its foreign policy. Indeed, Moscow’s support for some regional hard-liners and opposition to others, as well as its stance as one of the largest arms suppliers to the Middle East, are all grounds for this perception in the region. Although recently Russians have started to pay more attention to its soft power projection in different parts of the world, Moscow has a long way to go to make itself look more attractive on this front. The Middle East is no exception.

Russia’s soft power toolbox can be roughly divided into two compartments: one is state-driven instruments of greater engagement, and the other “grassroots” factors that build Russia’s image in the region.

Whenever one is talking about Russia’s soft power these days the very first thing that pops up is the flagship of Russian international media: RT. Formerly branded as Russia Today, RT boasts its Arabic service — RT Arabic — as one of the three largest TV networks in the region along with Al Arabiya and Al Jazeera. Labeled as “Putin’s propaganda bullhorn” by US Secretary of State John Kerry, RT is nevertheless doing a fairly decent job in disseminating the Russian agenda in the region.

According to Google Analytics, more than 2.5 million users visited the website of RT Arabic (then called Rusiya Al-Yaum) over the first quarter of 2009. The channel has grown 26-fold since attracting an average of 6.3 million users per month. In six Arab countries — Morocco, Egypt, United Arab Emirates, Saudi Arabia, Iraq and Jordan — RT is watched by 6.7 million people, while its overall audience in the Middle East, North Africa and Arab diasporas in Europe, according to its own sources, spans more than 350 million viewers. In May 2012, the number of views of its YouTube channel amounted to 57 million and alongside 228 million total views on the channel as of April 2015. Census shows this popularity became possible for two prime reasons: RT “represented alternative perspective on the world events” (37%) and “has [attractive] information content” (21%). Besides, RT Arabic was found to be more popular than Arabic-broadcasting Deutsche Welle, France 24 and Chinese “CCTV Arabic” together.

This was quite helpful for Moscow as Russia’s image in the region was seriously damaged in the wake of the Arab Spring, which was a critical milestone for Russia in the Middle East. Russian narrative of the events that swept the region in 2011-13 was different than that of Western states. Admitting to their grassroots nature, Moscow, however, has largely interpreted them as US-staged. Subsequent support for Syrian President Bashar al-Assad further alienated some regional elites and democracy-oriented groups gaining Moscow many new opponents. This made any promotion of the Russian agenda in the region difficult by default. Unfriendly relations with the Gulf monarchies that own leading regional media outlets shape the image of Russia as a hostile nation in many parts of the Middle East. To make matters for Moscow even worse, two prime market and informational competitors for RT — Al Arabiya and Al Jazeera — compared the crisis in Syria to that in Ukraine and put the blame on Russia’s policies in both cases.

Another government-driven initiative is the work with compatriots (“sootechestvenniki”). Their role as potential “agents of change” has been somewhat active in the past but is barely visible now. The category represents mainly native Russian spouses who moved to and settled in the region some time ago. They are reached out to primarily by the Rossotrudnichestvo Federal Agency — Russian analogue of the US Agency for International Development. It focuses mainly on culture, scientific cooperation, the study of the Russian language and fostering ties with the Russian diaspora. The agency operates seven Russian Centers for Science and Culture (RCSC) in Jordan, Lebanon, Syria, Egypt, Morocco, Tunisia and Palestine. However, the main criticism of their work is that they fail to promote an agenda appealing enough for local target groups. RCSC often holds events focused on commemorating outstanding Russians, which has little personal value for the people of the region, thus making it a waste for both sides.

Therefore, on a people-to-people level the focus is shifting toward two other potentially critical resources — tourists and pilgrims. Both, however, are a double-edged sword for Russia’s stance in the region. Russian tourists may have quite a specific reputation reinforcing all kinds of stereotypes, which is a rather negative trend for Russia’s image in the region. But they were also the ones ready to spend considerable amounts of money and act as saviors to many tourist industries in popular destinations in the wake of the Arab Spring, when many Europeans refused to travel there for safety reasons. There are about 400 registered businesses with Russian capital in Egypt alone, with a total amount of direct investments of $100 million, most focusing on tourism.

One more channel that could have become a potentially important tool in forging stronger ties with the region is that of Russian Muslims. Their exact number is debatable, but is said to be some 20 million people. At the same time, about 15,000-20,000 people from Russia undertake hajj annually. Besides, exterior relations of some of the North Caucasus republics, such as Chechnya, with Middle Eastern countries could also boost Russia’s engagement, and educational and cultural exchanges. However, the issue encounters genuine domestic opposition as some fear any rapprochement with the regional states is fraught with negative influences and severe security risks that may seep into the country. Moreover, growing nationalism and sporadic domestic tensions on this basis are also bad for Russia’s image abroad, especially in regard to its relations with the states of the region.