Russia, Qatar pushed to compromise. But will they?

A recent visit between Qatari and Russian officials indicate that in spite of their many differences, the two states may seek to cooperate. 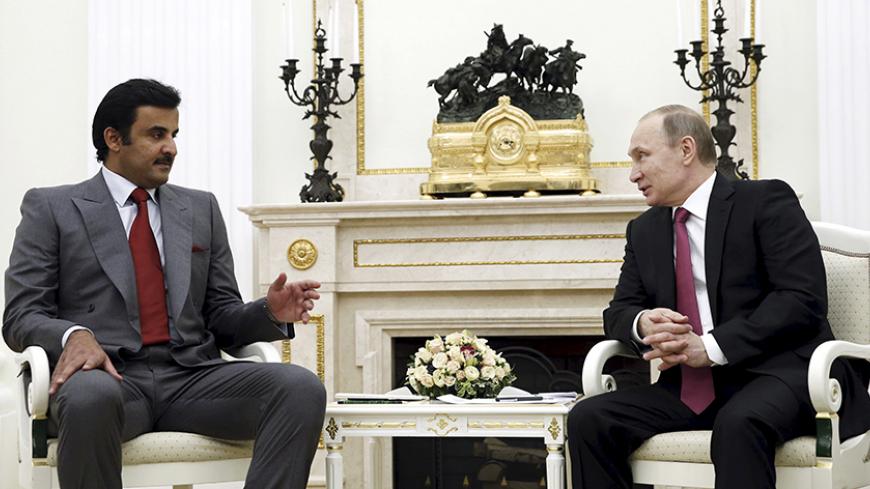 On Jan. 18, Qatar Emir Sheikh Tamim bin Hamad Al Thani  paid his first official visit to Russia, to meet with President Vladimir Putin. Since the Syrian war began, Russia and Qatar have been in opposing camps. Each perceives the other as a major spoiler in the conflict. Harsh rhetoric, often stylistically similar, sometimes flies both ways.

Before the new round of Geneva talks on Syria, now rescheduled for Jan. 29, Moscow continues to reconnoiter the ground of key regional and international players. In that regard, the talks with the emir were part of what came to be known in the Russian media as “the Middle East autumn.” Since September, Putin has hosted the presidents of Iran, Syria and Egypt; the prime ministers of Iraq and Israel; the Kuwaiti emir; the Saudi defense minister; the crown prince of Abu Dhabi; and — twice — the king of Jordan. At other venues, he has held negotiations with Iranian Supreme Leader Ayatollah Ali Khamenei and then Saudi King Salman bin Abdul-Aziz Al Saud. This “Middle Eastern diplomacy marathon” — another euphemism savored by Russian journalists — was perceived as an indication of Russia’s serious interest in the region and its commitment to work with all regional stakeholders in the Syria crisis. Qatar was left out of this picture because of positions that Moscow and Doha found irreconcilable. In December, Russian Foreign Minister Sergey Lavrov singled out disagreements with Qatar as “one of the major problems in the Syrian settlement process.”

Over the last quarter century, Russian-Qatari relations have been sluggish for the most part. Moscow deemed Qatar and Saudi Arabia to be fueling insurgency in the first Chechen war (1994-1996) and terrorist movements in the second one. The relationship went from bad to worse in 2004 after Russian security forces assassinated in Doha a prominent ideologist of Chechen separatists and in 2011 when Qatari airport security accosted Russia’s ambassador to Qatar when he refused to allow the diplomatic mail he carried from Moscow to be checked. The Arab Spring and the civil war in Syria drove the parties farther apart.

Therefore, the Jan. 18 meeting between the current leaders of Russia and Qatar was a much-anticipated event. The minor agenda of the talks was rather successful and resulted in bilateral agreements on two topics: visa-free travel for diplomatic passport holders and cultural cooperation. In turn, business experts were left with a task of creating a framework to boost economic cooperation that had failed miserably in recent years: In 2015, the trade between the two states was half the $55 million it amounted to a year earlier.

Behind closed doors, however, the parties had a more robust agenda that they discussed for more than two hours.

First, the agreement between Russia and Syria on Russia’s air force deployment in Latakia, publicized last week, virtually halts in its tracks Qatari’s gas transit to Europe via pipelines. Since the agreement is of unlimited duration, Moscow becomes a long-term regional player Doha can no longer rebuff as a “troublemaker” if it still sets its mind — which it does — on launching strategic energy projects beyond the Gulf. Qatar is clearly not happy about these prospects. Russia sees its base as rather a deterrent to more hostile actions against its own interests but at the same time does not want to directly confront a country that still has enough tools to upset some of Moscow’s key regional activities, such as the Geneva talks. Even the introductory statements by Putin and Thani were worded in a way to acknowledge the significance of each other’s country but yet softly signal these concerns. While Thani said, “Russia plays a leading role in stability in the world,” Putin said, “Qatar is an important component of the situation in the Middle East and the Gulf.”

Second, with Iran now being able to produce and supply its own energy to the market, both Russia and Qatar share an interest in softening the negative effects of energy-related price fluctuations at stock exchanges. As two of the world’s biggest gas producers, Russia and Qatar, according to Putin, “feel the need to harmonize policies in the energy sphere, especially in the gas industry.”

Besides, for Qatar, rising tensions between Riyadh and Tehran make the country feel — and rightly so — more politically vulnerable. That doesn’t mean the nation will compromise its interests, but the foreign policy toolbox it has been using may no longer be as effective — pushing Doha to reassess some of its approaches. Moscow may see this as an opportunity to promote its own vision for Syria — and broadly, the region. Interestingly, in talking about a potential Syrian settlement, neither Lavrov nor Qatari Foreign Minister Khalid al-Attiyah mentioned the name of Syrian President Bashar al-Assad. It is in no way a signal that Moscow is backing down on Assad, but rather an indication of the Kremlin showcasing its diplomatic sensitivity to issues that others — Qataris, in this case — view as irritants. Moscow certainly expects the same attitude in return and the talks were another opportunity for Putin to make sure Gulf opponents of Moscow’s policy do not filibuster the Geneva talks that the Kremlin has invested so much in. Russian Duma Speaker Sergey Naryshkin specifically channeled Moscow’s hope that Doha can be more cooperative on the issue of sorting out opposition groups and exerting the influence it has over groups that Russian security labels extremist.

What both parties agreed upon was that “all of the hot crises in the Middle East shouldn’t be used as a smokescreen on the Palestinian issue,” and that “direct talks with Israel about creating the state of Palestine should be resumed.” That regional states raise the Israeli-Palestinian conflict in their discussions with Moscow, and some — like the emir of Qatar — call on the Russian president to help “lift the blockade of the Gaza strip,” implies that they believe Moscow has leverage over Israel. In a way, that perception is based on Russia’s image as a powerful outside actor in the region — an image Moscow helped create with its operation in Syria.

That reputation pleases those who support greater Russian involvement in the Middle East, be they inside Russia or elsewhere in the region. They see it as a sign of Moscow’s authority and ability to exert great influence over regional conflicts, as opposed to their perception of the United States. Precisely the same arguments concern those who oppose Russian regional presence, as they fear Russia’s involvement will complicate any crisis even more. For this reason they believe Russia should stay out — at least where it has no critical security interests at stake. Regardless of where one stands, however, the region’s myriad policy complications and security challenges bear a risk of turning any further engagement into a quagmire. Given the state of the Russian economy and the overall international climate, the timing may be off. Russia will continue its course in Syria, but it is also interested in finding a politically appropriate and security-effective compromise with all the involved players. Qatar is clearly one of them.