Russia steps up its game in Mideast diplomacy

The heavy traffic between Moscow and the Middle East after US Secretary of State Rex Tillerson visited Russia last week signals that Russia is looking to quickly solidify its relationships with regional partners. 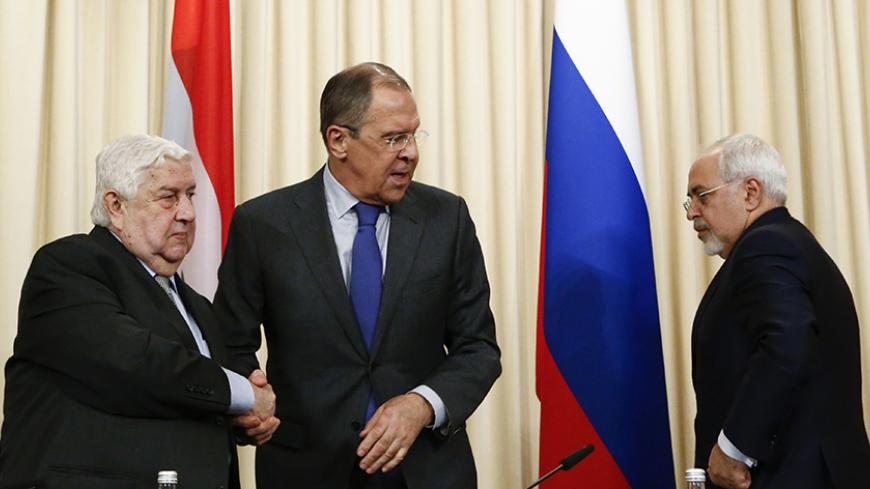 Since US Secretary of State Rex Tillerson’s visit April 12 to Moscow, Russian diplomats and officials have been busy meeting with all the key regional stakeholders in Syria. In just three days, on April 13-15, Foreign Minister Sergey Lavrov hosted in the Russian capital the foreign ministers of Syria, Iran and Qatar.

On April 16, the speaker of the upper chamber of Russia’s parliament, Valentina Matviyenko, traveled to Saudi Arabia.

In the midst of all this activity, an April 14 conference on settling the situation in Afghanistan brought to Moscow senior diplomatic and security officials from 11 countries. Moscow sees Afghan security as key to Middle Eastern stability.

Lavrov’s meeting with Syrian and Iranian counterparts was critical for them to reiterate their common stance on the Syrian conflict. For Tehran and Damascus, it was also important to hear that Moscow stands firm in its position and hadn’t struck any deals behind their backs with Washington during the Tillerson visit — at least not any that could essentially tip the balance to their detriment.

In a joint press conference April 14, Foreign Ministers Lavrov, Walid Moallem of Syria and Mohammad Javad Zarif of Iran condemned the US strike on a Syrian air base April 7. They called for a “careful, objective and unbiased investigation” of the April 4 gas attacks — allegedly made by Syrian President Bashar al-Assad against his own people — that led to the strikes. The ministers emphasized the need to maintain the political peace process for Syria even though, as Lavrov put it, "somebody" didn’t feel the need to observe the cease-fire agreement reached in Astana, Kazakhstan.

“Somebody” has become a Russian euphemism for the United States — yet since Astana was mentioned, Lavrov’s remarks might have been equally applied to Turkey.

A senior retired Russian diplomat speaking to Al-Monitor not for attribution said, “It looks like Turkey backed the wrong horse yet again. It sided with Russia and Iran when it looked liked the balance had shifted to their favor, and switched back to support the [United] States after the strikes. But now that it looks like the strikes don’t mean a radical change in the American strategy, Ankara finds itself in an awkward situation in respect to its position in the Astana peace process.”

Syria also was on the agenda of Lavrov’s meeting with Qatari Foreign Minister Hamad bin Jaber Al Thani, with both parties speaking in favor of a “united, sovereign and integral state.” The two ministers also discussed “closer Russian-Qatari coordination” in Yemen, Libya and the Palestinian-Israeli conflict. On Palestine, both spoke in favor of restoring Palestinian national unity. In other words, Russia is seen as having a long-term presence in the Middle East, with its role in regional conflicts having the potential to be destructive or constructive.

Matviyenko’s visit to Saudi Arabia stands out in this stream of diplomatic activity in that she was delivering Russia’s message to the Gulf. By and large it was the message that Lavrov had tried to convey to Tillerson: Russia won’t stand by Assad “at any cost” but is against “toppling the regime from the outside,” which Moscow sees as a reckless adventure that would be disastrous in the long run.

“Yugoslavia, Libya and Iraq have proved this [toppling of dictators] to be counterproductive and ending in tragic consequences,” Matviyenko said at her meeting with Saudi Foreign Minister Adel al-Jubeir. “OK, Assad leaves. But what’s next? What will Syria be like and who will come to power?”

Matviyenko — a former Soviet ambassador to Malta and later Russia’s ambassador to Greece — appeared before the Saudi leadership in the same “full-cover” dress she wore when meeting Zarif during her November trip to Iran. The move, which sparked some controversy in the Russian blogosphere, was meant to show respect for Islamic tradition and thus implicitly emphasize the difference in approach between Russians and Westerners in dealing with Muslim nations. Besides, Matviyenko, who has long been Putin’s confidante, conveyed the president’s personal invitation for Saudi King Salman bin Abdul-Aziz Al Saud to visit Russia year.

Vice Speaker Ilyas Umakhanov — a high-ranking senator from Dagestan with a long record of Russian dealings with the Arab world — accompanied Matviyenko on the visit. He made a critical observation following the meeting with Jubeir: “Riyadh doesn’t demand an immediate departure of Assad. But they admit this may be the subject during the transition period.” That is a concise summary of one of the things Russia wants from Riyadh.

Many regional powers, including the Saudi kingdom, supported the US strikes on Syria, which put Russia’s own military and diplomatic efforts in jeopardy. After Moscow realized that ousting Assad isn’t necessarily a first step in US President Donald Trump’s Syria policy, it was important to ensure that critical regional players also share this sentiment — or at least can be persuaded of it. Yet, it’s also clear the Saudis will not depart from their policy, and there should be a plan to address Assad’s fate further down the road. Umakhanov mentioned that the issue “is being discussed.” Upon Lavrov’s invitation, Jubeir will come to Moscow April 26 “to continue the consultations.”

The recent surge of violence in Syria signals a new stage of the conflict. This stage is just taking shape and regardless of what it’s going to look like, Moscow must ensure its own efforts aren’t derailed by developments similar to the gas attack or the US airstrikes.

At home, there is concern among Russian security forces over the rising activity of “returnees” — Russian nationals coming back from Syria. On April 19, Russia’s Federal Security Service (FSB) carried out raids in the central city of Vladimir and the southern city of Krasnodar, killing two terrorist suspects. A retired FSB general, commenting on the operation, said on Sputnik Radio that Islamic State militants “understand they’ve lost the battle for Syria and they are now sending their people to their homelands — including to Russia — to recruit new followers and launch terrorist attacks.” If these are the challenges to come — on both the domestic and international fronts — Moscow will need to better connect with pivotal Middle East players. That’s where it probably will direct most of its foreign policy initiatives.