Are Russia, US back to square one on Syria?

Days before the Syrian foreign minister's visit to Moscow, Russia's ambassador to the United States met with US officials to discuss concerns over a possible US retaliatory attack on Syria. The meetings come amid Syrian preparations to retake Idlib and an increase in the Russian and US naval military presence in the Mediterranean. 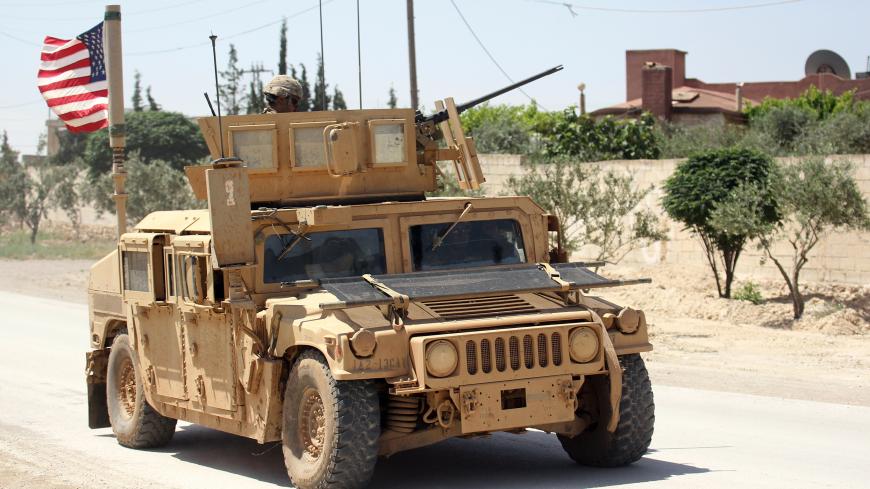 The U.S. flag flutters on a military vehicle in Manbij countryside, Syria, May 12, 2018. - REUTERS/Aboud Hamam

MOSCOW — On Aug. 30, Syria’s Foreign Minister Walid Muallem came to Moscow for talks with his Russian counterpart Sergey Lavrov. In recent weeks, political clouds over Syria have been piling up. These include President Bashar al-Assad's apparent preparations for a phased offensive on Idlib; that Russia and Turkey have been actively engaging behind the scenes to work the crisis out; that the United States has warned Damascus of grave consequences over a possible use of chemical weapons; and that both Russian and American militaries are beefing up their military presence in the Mediterranean.

The day before the Muallem visit to Moscow, Russian Deputy Foreign Minister Mikhail Bogdanov had a phone discussion with Syrian opposition leader Nasra al-Hariri to discuss possible options for a peace settlement in Syria. The conversation is part of an effort by Moscow to establish a dialogue line between Damascus and what Russia sees as “constructive opposition.”

"I hope our Western partners will not give in to (rebel) provocations and will not obstruct an anti-terror operation" in Idlib,” Lavrov said.

Until now, Moscow had been coming to the belief that although the crisis involving Idlib is serious, Russia’s contacts with Turkey were capable of producing a diplomatic solution that would ultimately suit all parties, at least for the time being, and that could deal a blow both to the terrorists and to those from the opposition who continue to refuse to lay down arms. For a couple of months, Moscow has been steadily promoting what it saw as its next priority in the Syria campaign — facilitation of the return of refugees. Russia's contacts with major countries hosting refugees in the region — Jordan, Lebanon and Turkey — yielded some good fruit: Governments in Amman, Beirut and Ankara, by and large, embraced Russia’s approach and were gradually coming on board on most of Russia's initiatives.

It was more difficult with the Europeans, and Germany and France in particular, since Paris and Berlin continue to be of the opinion that any massive return of refugees should happen only after needed social, political and security conditions are created and people feel safe. Yet even this wasn’t seen as too much of an issue, as the Kremlin expected growing popular European dissent over the presence of refugees, increased social and financial pressure on European budgets and European politicians' concerns about their own political futures to ultimately push European leaders to get on board with Russian proposals. The issue of the threat of force over the use of chemical weapons that popped up rather unexpectedly yet again makes Russia's leadership wary that the United States intends to derail what Moscow had been seeing as a clear-cut path to Russia's next Syria success.

A senior Kremlin official told Al-Monitor on condition of anonymity that American officials “want to play spoiler big time. They are disgusted that we’ve gotten an upper hand in dealing with this crisis and now they want to put spokes in every wheel we are trying to make roll.”

Lavrov points to another challenge Moscow sees for itself with the United States in Syria. “The American presence in Syria goes beyond a military aspect. By arguing against international engagement in creating conditions for the return of refugees to the Syrian territory that is under government control, our American partners are doing their best in developing the east of Euphrates, restoring infrastructure there, rebuilding socio-economic ties, even creating quasi-official governance bodies. This is fraught with attempts to split Syria and is a blunt violation of all UNSC resolutions that demand respect for Syria’s sovereignty,” Lavrov complained at the press conference with Muallem while referring to the UN Security Council..

For now, however, Russia is preoccupied with preventing a major military escalation around Syria similar to that in April when US-led strikes hit a few Syrian army targets.

A few days ago, Russian Ambassador to the United States Anatoly Antonov met with David Satterfield, the acting assistant secretary for Near Eastern affairs, and James Jeffrey, the newly appointed American Syria envoy.

The Russian Embassy in the United States said on its Facebook page, “The meeting went well, in a professional manner. We expressed serious concerns over signs that the US prepares new strikes on Syria over a pretext of chemical weapons use. We noted to Americans that such rhetoric on their side may be interpreted by different terrorist and pseudo-humanitarian groups like 'White Helmets' as a signal for staged provocations. We briefed them in detail on how terrorists from Jabhat al-Nusra are getting prepared for a provocation with the use of chemicals in Idlib to pin the attacks on the Syrian government. We warned the US against yet another groundless and illegal aggression against Syria. Another exacerbation of the situation in Syria doesn’t meet anyone’s national interests. … It’s our hope that the United States will take necessary steps to prevent terrorists from using toxic chemicals and will act responsibly.”

Last week, the secretary of Russia’s National Security Council, Nikolay Patrushev, met with US national security adviser John Bolton in Geneva to pass on a number of Russian proposals for cooperation on Syria. US officials, according to the Russians, promised to take time to review them.

Russia appears to understand that its arguments haven't been very convincing as for as the United States is concerned. And while the diplomats are doing what they have to be doing in this situation, the military is also doing its part. Over the last few days, Russia has gathered its biggest naval military presence in the Mediterranean, pulling ships from its Northern, Black Sea, Baltic and Caspian fleets. By now it reportedly has 10 combat ships, two submarines and a supply tanker with more ships to arrive in the coming days. To further deter Western powers from a possible military action, Russia's Defense Ministry announced that it will begin major naval drills near the Syrian coast Sept. 1.

“The situation in Syria has a significant potential to become more complicated and the situation around Idlib leaves a lot to be desired,” Kremlin spokesman Dmitry Peskov said in commenting on the news about the drills.

The Kremlin source added, “Conversations with Turks aren’t going easy but we are optimistic in that both parties are genuinely inclined to find a mutually acceptable solution. Another outside military escalation in Syria now will be seen as a clear intent to hamper this process. Frankly, it’s irritating and exhausting that every time there’s a need for a needle to fix certain fine things there comes a guy with an ax saying he’s going to fix it altogether.”

Russia’s frustration essentially reflects the underlying disagreements with the United States over Syria that have existed since the early days of the conflict. Moscow continues to see the United States as a force that is damaging for Syria, but also a force with enough power that Russia has continuously sought for Moscow and Washington to do something constructive together. The United States, having much less appetite for any cooperation, in turn appears to see Russia as a powerful force to reckon with in Syria and dangerous enough to be cautious with while at the same time seeking to avoid damaging American interests — even though different administrations have had a blurry view of what those are in the case of Syria.

A Russian proverb says “fight off the difficulties with your mind and the dangers with your experience.” It’s yet another time when the parties have to resort to good thinking to avoid putting to the test the experience they both have accumulated throughout the conflict.