Many questions are being raised about the Russian jet shot down Saturday over Idlib, Syria, and Russia is investigating to find out who actually did the shooting and who supplied the weapons. 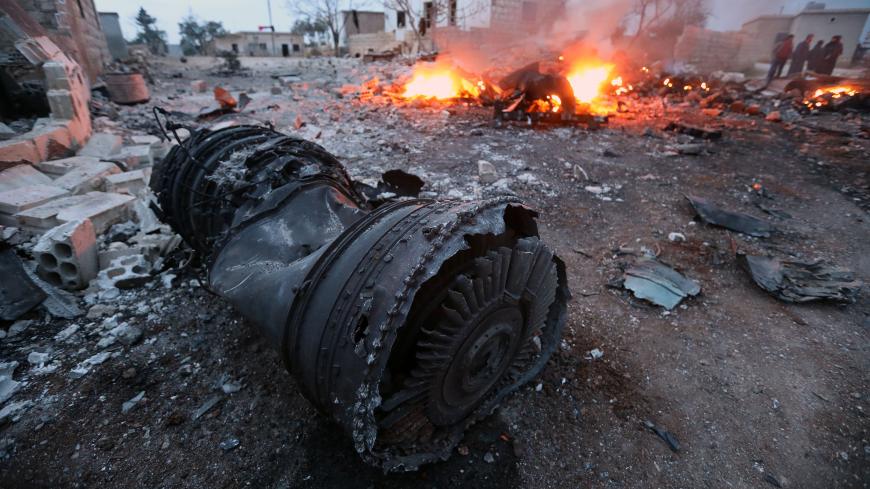 MOSCOW — Russia responded quickly and fiercely to the Feb. 3 downing of an Su-25 jet over Syria's Idlib province and the subsequent shooting death of its pilot. Shortly after the incident, the Russian Defense Ministry ordered precision missile strikes on the area and claimed to have killed at least 30 militants.

Russia is particularly concerned because the plane was apparently shot down by a portable anti-aircraft missile system, which would have been provided by some outside source. There were some discrepancies over who controlled the area where the plane was downed and who did the shooting.

The pilot, Russian air force Maj. Roman Filippov, managed to eject, but as he was descending, militants fired at him. Russian media reported the airman was still alive when he landed in the al-Nusra-controlled area and, probably mindful of his possible fate if captured, returned fire until he died. Several Russian outlets reported the pilot blew himself up with a grenade at the last minute and took out militants as they closed in on him.

The Conflict Intelligence Team, an independent investigative group that first obtained photos and documents about the incident, said Filippov was believed to be one of the best pilots in the Russian air force. BBC reported that the Russian Defense Ministry-controlled TV Zvezda said the pilot has been posthumously awarded the Hero of Russia medal, also known as the Gold Star.

Dozens of miles of Idlib province are contested among an array of groups, including the terrorist Hayat Tahrir al-Sham (HTS), a rebrand of Jabhat al-Nusra, which was affiliated with al-Qaeda; the Free Syrian Army; and its affiliate Jaish al-Nasr, which is considered a “moderate opposition group" that received weapons from the United States. Minutes after the downing of the Su-25, Alaa al-Hamwi, the military commander of Jaish al-Nasr’s aid defense battalion, claimed responsibility for the attack. Alaa argued that Jaish al-Nasr’s command supplied weapons to protect against the Russian air assault.

Later, however, HTS claimed responsibility for downing the plane.

The three immediate questions that arose from the attack were how the downing was made possible, how the militants acquired the arms and whether there was a bigger-level player behind the attack.

Russian aircraft usually operate at heights unreachable by portable missiles, though Su-25 strike fighters do tend to attack from midrange altitudes. This Su-25 was operating rather low. Russian military experts told Al-Monitor that, in situations like this, the specific type of missile system and the operator's experience also matter.

Mulling over possible options for the source of the weapon, experts brought up US supplies to the region, admitting, however, that the launcher could have been among Soviet-made arms captured by terrorists from Syrian army depots or supplies linked to Turkey, Qatar or Saudi Arabia.

Dmitry Sablin, the head of the Russian-Syrian parliamentary coordination group, implied that Moscow believes the missile used to down the Russian Su-25 was supplied via a state adjacent to Syria.

"Countries through which arms are supplied to be used against the Russian military should understand it won't go unpunished," he warned.

Franz Klintsevich, the first deputy chair of the Russian Senate Defense and Security Committee, didn’t mince words, saying he was "absolutely positive” the MANPADS, or man-portable air-defense systems, “had been supplied to the terrorists by the United States via third countries.” Also, he said, Western countries may be trying to provoke certain reactions.

“Today, we are undergoing a very complicated process, and provocations" are a useful tool. "The situation in the area is under Turkey’s control and [the downing of the jet] could have served to exacerbate the Russian-Turkish disagreements. I think Western intelligence services [also damaged] our further relations with the United States,” said Klintsevich, a hard-liner and a staunch critic of the United States.

“Our Defense Ministry is now conducting a serious investigation to find out who was behind this attack," he said. "But in this complex configuration of military actions, the role of American intelligence is becoming clear. They want to discredit our work on the fight against terrorists, and such provocations will continue.”

This view is in line with earlier Russian statements regarding chemical attacks in Syria and possible US military action against Syrian President Bashar al-Assad. There’s a firm belief in Moscow that Washington has been seeking to derail Russian political initiatives. A recent Russian Foreign Ministry press release said, “The US' stubborn desire to enact in Syria the scenario previously applied in the former Yugoslavia, Iraq and Libya is glaringly obvious."

All the US-related trash talk might indeed indicate that some segments of Russian security are seriously concerned at this point, yet the Kremlin still hasn't given up on the idea of seeking cooperation with US President Donald Trump on security and counterterrorism matters. Last week, the heads of Russia’s top security agencies were in Washington: Sergey Naryshkin of Russia’s Foreign Intelligence Service, Federal Security Service chief Alexander Bortnikov and Igor Korobov, the head of Russia’s military intelligence. The security officials met with CIA Director Mike Pompeo to discuss prospects for such cooperation. Earlier, Russian Ambassador to the United States Anatoly Antonov mentioned in an interview with Russia's RIA Novosti news agency that Moscow was “ready to increase cooperation with the United States in Syria.”

Russian officials have been careful in mentioning the possible role of another “usual suspect” in the Idlib jet incident: Turkey.

Russian officials have been careful in mentioning the possible role of another “usual suspect” in the Idlib jet incident: Turkey. At the expert level, however, the rationale that Ankara might have played an official role in the attack stems from the deep-seated distrust between Russia and Turkey, their tacit disagreements over Idlib, and previous incidents, including both Turkey's downing of a Russian jet over Syria in 2015 and the recent shelling of the Khmeimim air base.

In addition, even though President Vladimir Putin and Turkish President Recep Tayyip Erdogan both expressed positive assessments of the recent Syrian National Dialogue Congress in Sochi, Ankara has reason to be less optimistic about the role the opposition groups it supports play in the process and on the ground.

Moscow believes that because Turkey has deep contacts with the opposition, including its radical groups, Ankara can thus help rein them in. The belief is evidenced by the Russian Defense Ministry reaching out to its Turkish counterparts for help in getting the pilot's body returned to Russia.

Other players see the incident as an opportunity to manipulate emotions in Moscow. Some, like the local Kurdish militias under fire from Turkey and its opposition allies, have sought to enlist Russian support. Reizan Hedu, the official representative of the Kurdish defense forces in Afrin, was among the first to express condolences to Russia on the loss of the pilot and asserted, “The Russian pilot was killed at the hands of terrorists who also bear responsibility for the death of Kurds.”

Hedu added, "I think everyone understands who supports these terrorist groups. They are besieged in Idlib and can only receive support from Turkey. In Idlib, the Syrian government forces are being countered by groups that support Turkey’s offensive in Afrin."

Regardless of who was behind the attack, any gloating among Russia’s opponents over the humiliation Moscow has suffered in the downing of its jet won’t help their political cause. If the attack indeed was a well-plotted action, as most Russian narratives suggest, it overlooked the longer term implications the incident may have on Russia’s Syria policies.

The drawdown of Russian troops in Syria announced in December was seen as a result of Russia’s successful large-scale military involvement in Syria. Putin thought it was the right moment to save Russia from a military quagmire and focus predominantly on the political settlement in Syria, including via Moscow-led initiatives such as the Sochi congress. Despite the controversies accompanying the Sochi meeting and attendees' mixed bag of reactions afterward, the idea behind the Sochi event was meant to signal Russia’s flexibility to work with all sorts of local players and engage with anyone ready to interact. The Russian strikes have slowed, but essentially never stopped — and the roles Moscow wants the actors in Syria to play were to be set by Russia, not the opposition or its sponsors.

In recent months, however, Moscow has been willing to consider compromises with different actors to see how a political settlement — one favorable to Russian interests, of course — could be tailored. The situation in Afrin, for that matter, was part of the equation where, as Al-Monitor reported, Moscow exercised one of the prime principles of its Middle East policies: "Steer away from crises where Russia's own security interests are not directly at stake."

It matters little how tough Moscow gets in the short term, even if the group behind the attack is eliminated rather quickly. Putin is nearing his highly likely re-election March 18 and won’t let anyone escape punishment for a provocation threatening to shatter his own or Russia’s public image.

What matters is what far-reaching conclusions Russia may be drawing from the attack on its jet and pilot, especially if Moscow believes that attack shares similarities with previous offensives on its military infrastructure in Syria, and how it’s going to square this conclusion with its future presence in Syria and the Mideast, its operational objectives and its role in the political settlement.

Militarily, the downing of the jet is a pinprick and is unlikely to make Moscow reverse its decision on its troops' presence. But the Kremlin is now likely to throw even more weight behind Assad (especially since Moscow has been seeking to leverage Assad lately), beef up its military strikes on the terrorists and “uncooperative opposition” alike, and be less flexible politically. At the end of the day, Russia believes it now has yet another reason to think it’s doing the right thing in Syria.