Why are Syria's IDPs returning home? 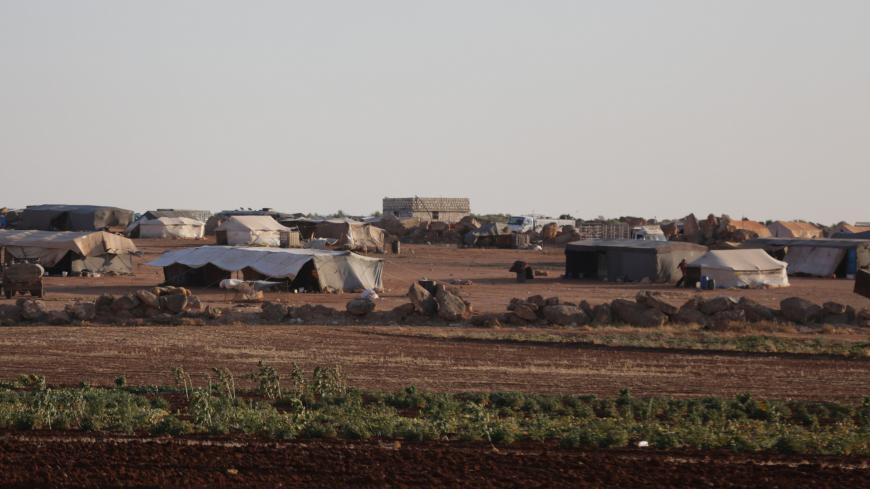 A view of tents at a refugee camp for internally displaced Syrians in Idlib province, Syria, July 30, 2018. Many Syrians displaced by the war have returned home, and Idlib appears to be the next major battlefield. - REUTERS/ Khalil Ashawi

Grandi in Douma: “Many have returned”

‘Although of course a lot of people are still displaced from their homes, many have returned,” Grandi said. “They are trying to live a normal life amidst the ruins, with very little resources, struggling to normalize life that has been disrupted by so many years of war.”

More than 750,000 Syrians displaced by the war — 11% of the total 6.6 million internally displaced people (IDPs) in Syria — have returned to their areas of origin, according to UNHCR. A much smaller number of refugees, 90,000 out of a total of 5.6 million (or 1.6%) living in neighboring countries, have trickled back to Syria in the past three years, although UNHCR is ramping up to assist a larger-scale organized return.

“Grandi acknowledged the [Syrian] government’s statement of last month welcoming refugees back,” according to UNHCR. “Both he and his government interlocutors agreed that refugee repatriation can only be based on a voluntary decision by refugees themselves, and needs to take place in safe and dignified conditions, and to be sustainable for the longer-term. Grandi conveyed to the Syrian officials the concerns refugees cite regarding return. … According to UNHCR surveys and focus group interviews in neighboring countries, these include the fragility of the security situation in some parts of the country, the presence of unexploded ordnance and physical risks in other areas, and the need for guarantees that they will remain safe on return and that their rights will be respected.”

US Secretary of State Mike Pompeo conveyed his “serious concerns related to possible military activity in Idlib” to Russian Foreign Minister Sergey Lavrov in an Aug. 23 phone call, saying the United States would hold the “Syrian regime accountable for its use of chemical weapons,” implying the threat of military force.

On Aug. 29, in an urgent appeal to “the government of Syria and all parties to exercise restraint and to prioritize the protection of civilians” in Idlib, UN Secretary-General Antonio Guterres said, “Any use of chemical weapons is totally unacceptable.”

Maxim Suchkov reported, “The issue of the threat of force over the use of chemical weapons that popped up rather unexpectedly yet again makes Russia's leadership wary that the United States intends to derail what Moscow had been seeing as a clear-cut path to Russia's next Syria success. A senior Kremlin official told Al-Monitor on condition of anonymity that American officials want to play spoiler big time. They are disgusted that we’ve gotten an upper hand in dealing with this crisis and now they want to put spokes in every wheel we are trying to make roll.”

While the seemingly imminent siege of Idlib could risk what Guterres called a “humanitarian catastrophe,” missing from US statements is what to do about Hayat Tahrir al-Sham, the terrorist group and al-Qaeda affiliate, and other dead-ender jihadis and foreign fighters who have taken refuge in Idlib. These groups have been mostly abandoned by their former regional backers in the Gulf and Turkey, while imposing Islamic law in the neighborhoods they control and holding the people of Idlib hostage to their doomed-to-fail last stand.

UN Syria Envoy Staffan de Mistura, who has offered to escort Idlib residents to safety in the event of an attack, said Aug. 30 that the northwestern Syrian province includes an “extremely high concentration of foreign fighters,” adding that “this amounted to approximately 10,000 al-Nusra or al-Qaeda members, who have been recognized as terrorists by the UN,” according to UN News.

Ankara seems to have so far tried and failed to hold off a seemingly imminent attack by trying to accommodate and peel off some off some of the armed groups from Hayat Tahrir al-Sham, as Al-Monitor has reported. “Turkey may have painted itself into a corner in Idlib by not paying enough attention to the growing jihadi presence there and by concentrating solely on trying to curb Syrian Kurdish aspirations,” writes Semih Idiz, leaving the initiative in Idlib to Russia, which has shown greater success in enticing armed opposition groups to consider reconciliation with the government, as reported Sept. 1 by The Wall Street Journal.

The failed “sectarian "narrative" propagated by Turkey and some of the Gulf backers of Syrian armed groups, which got a bit of a second wind with Washington’s renewed emphasis on Iran’s "malign" activities in Syria and elsewhere, maintains an odd hold in parts of the media, which often cast the battle of Idlib as between “regime” and undistinguished bands of “rebels” as if it were 2011 and the rebels in Idlib were the brave Syrians who took to the streets seven years ago to protest the Assad regime rather than the sordid mostly jihadi lot pointed out by de Mistura and well-known to readers of Al-Monitor.

Although Turkey and the Gulf have backed off from support of most of the armed groups in Idlib, there may still be an interest, and need, for some face-saving for some of the Sunni governments and elites before the die is cast, and in order to smooth the post-conflict transition process.

With that in mind, Russia has accelerated its efforts to press ahead on the Sochi dialogue between the Syrian government and opposition on constitutional reform, which could lead to eventual reductions in presidential powers which, interestingly, have been on the table since before the Syrian uprising.

On Aug. 29, the day before Syrian Foreign Minister Walid Muallem’s visit to Moscow, Lavrov hosted Saudi Arabian Foreign Minister Adel al-Jubeir. That same day, Mikhail Bogdanov, Russia's deputy foreign minister and special presidential representative for the Middle East and Africa, spoke with Nasr al-Hariri, chief negotiator for the opposition Syrian Negotiations Commission, which is backed by Saudi Arabia. Bogdanov stressed in the call with Hariri that it is necessary to completely eradicate the Islamic States and Jabhat al-Nusra "terrorist groups on Syrian territory, ensure Syria’s unity, territorial integrity and sovereignty, establish a steady negotiations process between the Syrian government and the constructive opposition in the interests of restoring national accord; create the Constitutional Committee so that it can start working according to resolutions of the Syrian National Dialogue Congress in Sochi, and create adequate conditions for a speedy return of the Syrian refugees to their country.”

After Jubeir left Moscow, Muallem arrived the following day for discussions of the Sochi process, Idlib, and related issues.

Lavrov said at a press conference with Muallem that Russia and Turkey have been discussing how to resolve issues related to the "Idlid de-escalation zone to preclude further use of the area by terrorists, mainly by Jabhat al-Nusra, to separating terrorists from the armed opposition, which is ready for dialogue with the Syrian government." Lavrov added, "We do not have any artificial schedules or deadlines, but this needs to be done as soon as possible.”

One key deadline to note, however, is the summit in Tehran on Sept. 7 between Russian President Vladimir Putin, Turkish President Recep Tayyip Erdogan and Iranian President Hassan Rouhani.