Why Russia seeks to stay neutral in Saudi-Qatar rift

Russia's offer to mediate in the Qatar crisis is a strategic move designed to place Moscow in the catbird seat without endangering relations with either side. 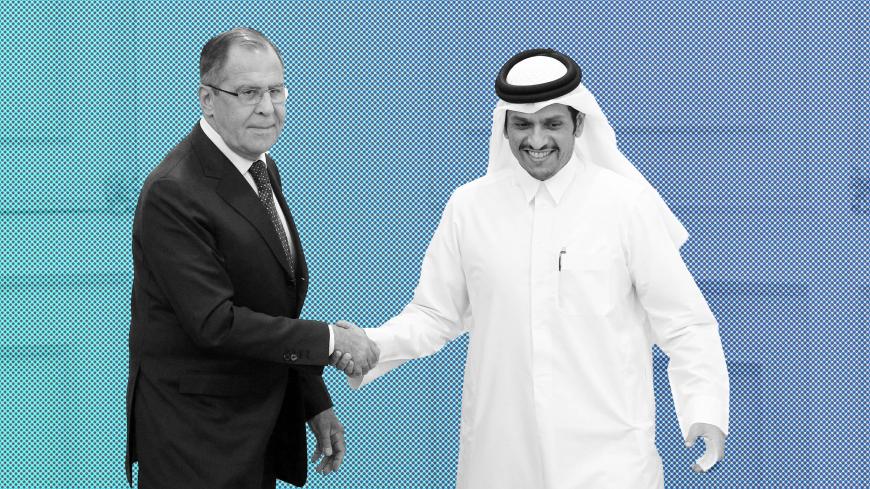 Russia clearly wants to remain neutral in the conflict among Gulf Cooperation Council (GCC) countries, as evidenced by Foreign Minister Sergey Lavrov's three-day trip this week to the United Arab Emirates and Qatar. The minister not only visited states representing both sides of the conflict, he also went to Kuwait to express Russian support for that country's efforts as a mediator.

The beginning of the current tensions between Qatar and Saudi Arabia was an unpleasant surprise for Russia. While Moscow had no illusions regarding political friction among GCC members, it could not have expected the friction to lead the Arab monarchies to such a deep crisis. Under these circumstances, the Kremlin made the only reasonable choice: It stayed neutral and offered its services as a mediator. Picking one side would damage Russia's relations with the other, and Moscow wants to remain in good standing with all GCC members.

Russian interests in keeping good relations with Saudi Arabia, which Lavrov said he would visit in early September, are quite obvious and largely related to economic matters. Moscow and Riyadh are trying to stabilize prices in the oil market. In April, the speaker of the upper chamber of the Russian parliament, Valentina Matvienko, said that by the beginning of 2018, Moscow and Riyadh plan to implement several important projects costing as much as $3 billion. In July, Russian Energy Minister Alexander Novak confirmed Moscow still has a big appetite for joint oil and gas projects with the Saudis. On one hand, Russia promotes establishing joint scientific centers that would work on new technologies in drilling, oil servicing and oil transportation. On the other hand, it also seeks to open the Saudi market for Russian oil drilling and service companies. In addition, the Kremlin hopes to sell Riyadh arms and military equipment. Russia is well aware of Saudi Arabia's political influence in the region and the Muslim world, and Moscow would also like to find common language with the Saudis on the situation in Syria. All these motives are enough to keep Russia interested in the dialogue with Saudi Arabia, but not enough to make the Kremlin take Riyadh’s side in the conflict with Qatar.

From 2009 to 2015, Russia’s relations with Qatar were not easy. For almost six years, Qatar was an "enfant terrible" of the Middle East for Russia. Doha heavily criticized Moscow for its support of Syrian President Bashar al-Assad. Qatar's TV channels openly called Putin “the dictator of the 21st century” and even labeled Russia the main enemy of the Muslim world. In 2012, Russian Ambassador to Qatar Vladimir Titorenko was assaulted at the Doha airport. Finally, Doha actively confronted Moscow’s efforts to dominate at the Gas Exporting Countries Forum.

For almost six years, Qatar was an "enfant terrible" of the Middle East for Russia.

Consequently, it was surprising to see the Kremlin clearly prepared to help Doha minimize the negative effect from its conflict with other Arab countries. On June 9, shortly after the beginning of Saudi attempts to isolate Qatar, Russian authorities welcomed Qatari Foreign Affairs Minister Mohammed bin Abdulrahman Al Thani in Moscow; he thanked the Kremlin for its readiness to help. Moreover, just a couple of days before that visit, Russian officials were discussing prospects for cooperation in the oil and gas sphere and beyond with Saudi Crown Prince Mohammed bin Salman and Saudi Oil Minister Khalid al-Falih. There was logic in Russia’s behavior.

First of all, after years of complicated relations with Qatar, Russia came to understand that a country's size isn’t necessarily relevant to its clout in the Middle East. It made complete sense to befriend "small" Qatar, which has significant influence in the political arena and in the media (neither the Saudis nor their allies have anything equal to Al Jazeera). Qatar is also a leading exporter of liquefied natural gas — a niche market Russia would like to be involved in.

Since 2015, Russia has been trying to improve its relations with Doha. In late 2013, it decided not to demand an apology from Qatari leadership for the airport assault on Titorenko, and it appointed Nurmuhammad Kholov as his replacement. Since then, contacts between the two countries have grown. In 2016, Qatar even bought a stake in Russian oil and gas giant Rosneft. Under these circumstances, the Saudi-Qatari conflict provided Moscow with new opportunities to improve relations with Doha. Russian officials' warm welcome to Al Thani during his June trip sent a signal to Doha: Russia is a friend. Of course, the promise of help was a formality. Moscow knew Qatari authorities wouldn't accept the offer, yet it was an important, positive political gesture that Doha will probably remember for quite a while.

Russia's positive economic cooperation with Qatar also influenced Moscow's neutrality in the conflict. In spite of periodical turbulence in political relations, Russia and Qatar have built a sustainable economic dialogue. From this perspective, Riyadh doesn't fare well in comparison; the Saudis keep feeding Moscow promises of huge investments in the Russian economy but never deliver on these promises. Doha, on the contrary, is one of the biggest Middle Eastern investors in the Russian economy. By 2017, the volume of Saudi investments in Russia reached $600 million against Qatar's $2.5 billion. The Qataris' choice of investment projects was also important. Apart from Rosneft, in 2013 they bought into a leading Russian bank, VTB. Three years later, they invested in the Pulkovo Airport in Putin’s native St. Petersburg. While preparing these deals, the Qataris got acquainted with influential figures in Russian business and politics.

Finally, the United States also factored into Moscow's decision not to join the anti-Qatari or anti-Saudi alliance. As tensions between Moscow and Washington continue, the Kremlin wants to remind the United States and the international community that Russia is an important player and its views should not be ignored. By offering to mediate, Moscow demonstrates its significance as a country that can talk to either side of the conflict, as opposed to the United States, which has managed to criticize both sides harshly, depending on who is speaking at the moment.

However, while officially proclaiming its readiness to play a mediator role, Russia would prefer to avoid playing it. According to some Russian diplomats, Moscow will join the settlement process only if directly sought out by the parties involved. The Russian motives for letting others play the intermediary role are quite clear: A failed attempt to settle the conflict might harm Russia's image as a mediator, and the chances of failure are quite high. There are also no reasons for Russia to be in a hurry to settle the crisis between Qatar and Saudi Arabia. Moscow is successfully balanced between Doha and Riyadh. Meanwhile, the crisis diverts attention of both the Saudis and Qataris from Syria and makes them less interested in direct involvement in Syrian affairs. Consequently, Russia — which sees Riyadh and Doha as its opponents in Syria — has more freedom there.