Russia’s reading on what’s at stake in Qatar crisis

Moscow has pricked up its ears as Qatar’s diplomacy problems grow more raucous. 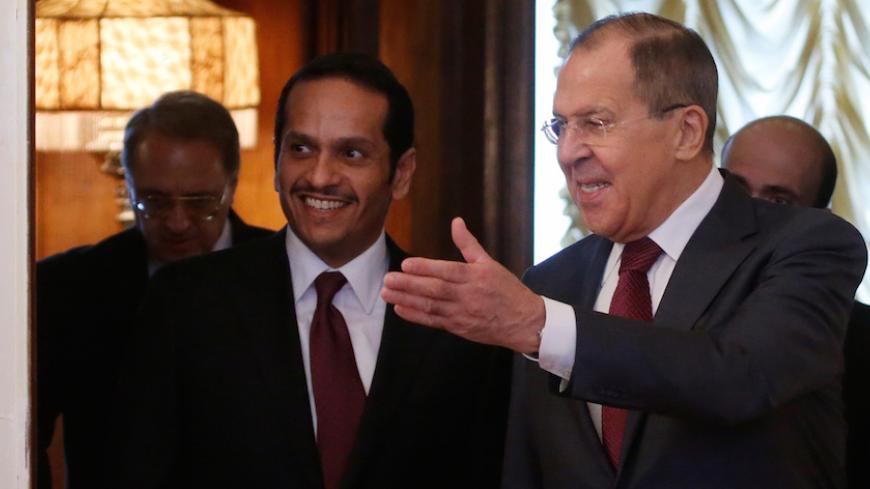 The diplomatic row around Qatar that is flaring up into something more serious caught many in Russia by surprise. Although disсontent with a number of Doha’s activities has been smoldering in the region for a while, it didn’t appear on most Russian experts’ radar screens largely because Russia didn’t expect the rivalry for Gulf Cooperation Council (GCC) leadership to affect Moscow policies all that much.

Now that the crisis threatens to spill over to the rest of the Middle East, Moscow is adopting a more watchful stance.

Meanwhile, in a phone call reportedly initiated by Doha, Russian Foreign Minister Sergey Lavrov discussed the situation with his Qatari counterpart, Sheikh Mohammed bin Abdulrahman Al Thani. According to a Russian Foreign Ministry press release, the diplomats expressed "serious concern over the emergence of yet another hot spot of tension within the Arab world.” Lavrov favored negotiating “in the face of unprecedented challenges such as terrorism.” The next day, June 6, Putin and Thani conversed by phone themselves, talking investments, trade and economy, and praising existing cooperation. On June 7, Russia’s president was on the phone with Egyptian President Abdel Fattah al-Sisi.

Russia considers both Qatar and Saudi Arabia “protagonists” in the crisis. The Kremlin, and arguably most Russian experts, place both countries in the category of "terrorism sponsors.” This perception originated largely from the time of the Chechen war, which according to Russian security services was heavily supported — financially and ideologically — by the Gulf monarchies. That period of contemporary Russian history to a great extent shaped the current narrative on "accomplices of terrorism" enshrined in the public perception of what Moscow is fighting against in the Middle East. There is little reason to presume this view in Moscow has dramatically changed. Moscow holds its own ideas about who sponsors what, when and at what amount — handy scorekeeping tidbits to pull out on a “rainy day,” as it did after Turkey downed a Russian jet. Outside the expert circuit, however, Russia makes little distinction between the ideological tints of the radical movements over which Qatar and the Saudis spar.

Yet, as Russia has sought to diversify its regional foreign policy toolkit, constructive relations with both the Saudis and Qataris have been of vital importance to Moscow in recent years. In December, Russian state oil giant Rosneft sold 19.5% of its shares to Glencore and the Qatar Investment Authority for 10.2 billion euros (about $11.5 billion at today’s conversion rate). The deal raised many eyebrows in Russia and across the Middle East, but was considered mutually beneficial. When speculations arose about Rosneft potentially invoking a buyback option from the Qatari fund, the Kremlin called them “irrelevant,” signaling its long-term commitment to dealings with Doha.

A senior Russian diplomat in the Gulf who spoke with Al-Monitor not for attribution noted a "positive change in Qatar's attitude regarding Russia under the new emir, Tamim bin Hamad Al Thani.” Positive changes are in short supply for Russia in the Gulf, which makes the relationship with Doha even more valuable for the Kremlin. Moreover, 2018 is supposed to be a cross-cultural year for Russia and Qatar with a number of big public events and lucrative deals to boost the relationship even further.

The current regional dismay, however, jeopardizes Russia’s calculations for Qatar. In late May, rumor had it that Putin would be going to the Gulf — allegedly on a tour to Saudi Arabia and Kuwait — but the Kremlin dismissed the reports. Going to the region at this point would indeed be read as an attempt to interfere in the conflict by taking sides. So even if the top-level visit had been planned at one point, it would now have to be canceled or delayed. This doesn’t mean, however, that Moscow cannot designate an envoy to learn the depth of the conflict and its implications for Russia’s interests in the Middle East and North Africa region. A source close to the Russian Foreign Ministry told Al-Monitor that Russian Deputy Foreign Minister Mikhail Bogdanov is in contact with top Qatari officials.

Although the chain of communications in the days following the crisis suggests Moscow took a pro-Qatar stance, that is not necessarily the case. On June 7, Putin aide Yuri Ushakov dismissed suggestions that Moscow is considering a “go-between” status in the crisis, saying, "The very instance of our proactive work and efforts by the president, the foreign minister and through other channels underscores the fact that we are interested in a settlement to the Qatar affair through political and diplomatic means."

Russian Energy Minister Alexander Novak's statement that same day was designed to double-down on this agenda, with the minister suggesting that Russia and Saudi Arabia “may potentially invest billions of dollars into implementation of joint oil projects."

Moscow wants to avoid risking its relations with other states — both those that cut diplomatic ties with Qatar and those advocating the move. Soon after the diplomatic ties ruptured, many in Russia suggested the split was driven in part by the United States. US President Donald Trump’s tweets reinforced the initial suspicions, though Washington’s official stance is more moderate and nuanced.

There is also the possibility Israel might have had its say in the matter. Kirill Semyonov, a well-connected expert on the Middle East, told Al-Monitor, “Israel, too, may have played some role in this [Qatar crisis] by putting some pressure on the White House. Israelis were displeased with both the role Qatar played in the Gaza Strip and Doha’s dealings with Tehran in supporting Hamas.”

Russia barely even considers Iran when perusing its list of other “usual suspects” of instigators in the row, but Iran is definitely talked about — alongside Syrian President Bashar al-Assad and, in this case, Israel — as an immediate beneficiary of the conflict among major Arab nations.

On a larger scale, Moscow is ensuring the spat surrounding Qatar doesn’t create more instability in Syria, given Qatar’s influence over armed opposition groups there. This might be the case in Yemen and Iraq, but since Russia has fewer assets there, it is thus less worried about those fronts. Moscow is preoccupied with what the regional turmoil might do to energy markets. Earlier, Gazprom suggested Qatar might have problems with liquefied natural gas exports. Another indication of these concerns is that one of the first issues the Russians talked through with the Qataris hours into the row was Doha’s commitment to the OPEC deal to cut oil output.

Turkey, as a much bigger stakeholder in Qatar, apparently has similar concerns. No wonder in the phone discussion of the “Qatar crisis” between Erdogan and Putin the two focused on the conflict in Syria and prospects for the “South Stream” offshore oil pipeline project linking Russia and Turkey.

They say friends make the worst enemies. The current situation might not become as bellicose or bloody as some predict, but it could sow even more distrust among regional players, making regional conflict settlement even more of an ordeal for everyone.