The Kremlin tightens its military relationship with Qatar, with Doha finalizing the purchase of S-400 air missile defense systems from Russia. 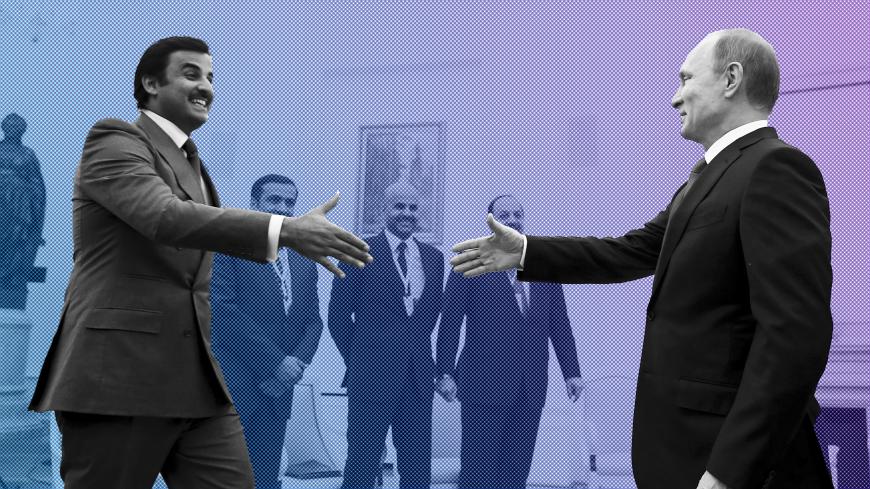 Moscow and Riyadh have entered the final stages of negotiations on the sale of Russian S-400 air missile defense systems to Saudi Arabia. On Feb. 21, Saudi Ambassador to Moscow Raed Bin Khaled Qrimli said the two parties are having “detailed discussions … on the final arrangements and technical issues, especially with regards to the transfer of technology and information.”

But Riyadh isn't the only one looking to acquire these systems form Moscow. A month ago, on Jan. 25, Qatar’s Ambassador to Russia Fahad bin Mohammed Al-Attiyah told the Russian state news agency TASS that Doha was holding “advanced negotiations” with Moscow over the purchase of S-400 air missile defense systems. The announcement came just weeks after Russia’s presidential aide for military-technical cooperation, Vladimir Kozhin, singled out Qatar as an important new Russian arms export partner. Attiyah’s statement underscored the Kremlin’s commitment to strengthening its relationship with Doha.

On Feb. 22, top Qatari military figures were in Moscow for Putin’s meeting with the leadership of the defense ministries of several countries invited to a gala meeting devoted to Defender of the Fatherland Day — Russia’s major national holiday celebrated on Feb. 23.

As Russia has been improving relationships with Saudi Arabia and the United Arab Emirates (UAE) in recent months, Moscow’s decision to sell sophisticated weaponry to Qatar comes with considerable risk of backlash. Russia’s efforts to strengthen its relationship with Qatar can be explained by Doha’s unique appeal as a trade partner and its potential to assist Moscow’s conflict-arbitration efforts in the Middle East.

Although the Qatari Investment Authority possesses a $2.5 billion stake in Russia’s oil industry, recent trade negotiations between Russia and Qatar have focused primarily on the defense sector. Since the start of the Gulf Cooperation Council (GCC) blockade against Qatar in June, Doha has upgraded its military capabilities to defend itself against what it perceives as aggressive actions from Saudi Arabia and the UAE. As the United States has been reluctant to antagonize Qatar’s GCC rivals by contributing greatly to Doha’s military modernization efforts, Qatar has aggressively courted Russian military assistance.

To demonstrate its willingness to purchase air defense systems from Russia, the Qatari Defense Ministry signed a landmark military technology sharing agreement with Moscow in October. Russia has swiftly converted this rhetorical pledge into arms contract negotiations, as Qatar has been a more amenable partner for Moscow to negotiate with than Turkey or Saudi Arabia.

Even though the United States has attempted to deter Turkey from purchasing S-400 missiles from Moscow, Washington has not tried to obstruct Qatar’s proposed S-400 deal with Russia. The US government’s silence on Qatar’s S-400 negotiations has increased Doha’s appeal as a Russian arms client, as Qatar is much less likely than Turkey or Saudi Arabia to backtrack on its arms deals with Russia due to external interference.

The benefits of convincing Qatar to purchase Russian military technology extend beyond hard currency and export revenues. The resulting improvement in bilateral relations generated from a strengthened Russia-Qatar defense partnership could reduce the risk of a Moscow-Doha struggle for hegemony over the liquefied natural gas (LNG) sector. In June 2017, Russian energy giant Novatek announced two major LNG projects in the Arctic region that could eventually allow Russia to surpass Qatar as the world’s leading LNG producer.

Even though Qatar’s Minister of Energy and Industry Mohammed bin Saleh Al-Sada recently said the expansion of Russia’s LNG sector is mutually beneficial, analysts predicted an intensified struggle between Moscow and Doha for supremacy over LNG markets. These predictions have been supported by allegations that Moscow encouraged Syrian President Bashar al-Assad to block the passage of Qatari natural gas through Syrian territory. Strengthening the Russia-Qatar relationship could increase collaboration between the two countries on LNG export projects.

In addition to these economic benefits, a sustained improvement in Russia-Qatar relations could give Moscow a vital new partner in its conflict arbitration efforts in the Middle East. As Qatar has been able to balance favorable relations with ideologically disparate factions, Doha’s diplomatic strategy has close synergy with Russia’s support for the establishment of all-inclusive political settlements to regional conflicts.

The synergies between Russian and Qatari diplomatic strategies have revealed themselves most strikingly in Yemen. Since Qatar was expelled from the GCC coalition on June 7, Doha has echoed Russia’s calls for a swift end to military operations in Yemen and the implementation of a comprehensive peace settlement. Qatar’s alleged mediation efforts between Houthi rebels and supporters of former Yemeni President Ali Abdullah Saleh in early December also resemble Moscow’s long-standing use of clandestine diplomacy to assuage tensions between these Shiite factions.

Even though Russia distanced itself from the Houthis after Saleh’s assassination, Moscow wants Yemen to be governed by a secular authoritarian leader willing to share power with pro-Iran factions. As Qatar maintains favorable relations with the Houthis and Sunni militant groups — such as Yemen’s Muslim Brotherhood branch, al-Islah — and has acted as an on-and-off mediator between the Houthis and Yemeni government since the mid-2000s, forging a stronger partnership with Doha could greatly strengthen Moscow’s arbitration ambitions in Yemen.

In the long run, Kremlin policymakers hope that highlighting the compatibility between Russian and Qatari conflict resolution strategies will ameliorate tensions between the two countries over Syria. Qatar’s cooperation with Iran over the March 2017 evacuation of four Syrian towns and its diplomatic ties with Hezbollah suggest that Qatar could be willing to compromise with Russia over Syria if bilateral relations continue to improve.

These actions have encouraged Russian policymakers to engage in more frequent dialogue with their Qatari counterparts on resolving the Syrian conflict. Russian President Vladimir Putin’s Nov. 20 phone conversation with the Qatari emir on the Syrian conflict underscores Moscow’s willingness to entice Qatar into convincing Doha-aligned Syrian opposition factions to diplomatically engage with Assad. As Syrian opposition representatives boycotted the Sochi talks, achieving a compromise from Qatar would provide a necessary boost for Moscow’s increasingly stagnant diplomatic efforts in Syria.

Even though the Russian government has remained officially neutral in the Saudi Arabia-Qatar standoff, a sustained improvement in Russia-Qatar relations would give Moscow a valuable client for Russian military technology, facilitate the development of Russia’s LNG sector and enhance Russia’s effectiveness as a Middle East conflict arbiter.