Despite differing views between former Lebanese Prime Minister Saad Hariri and Russia on the makeup of the Lebanese government, Hariri's recent visit to Moscow shows the bond between the two countries. 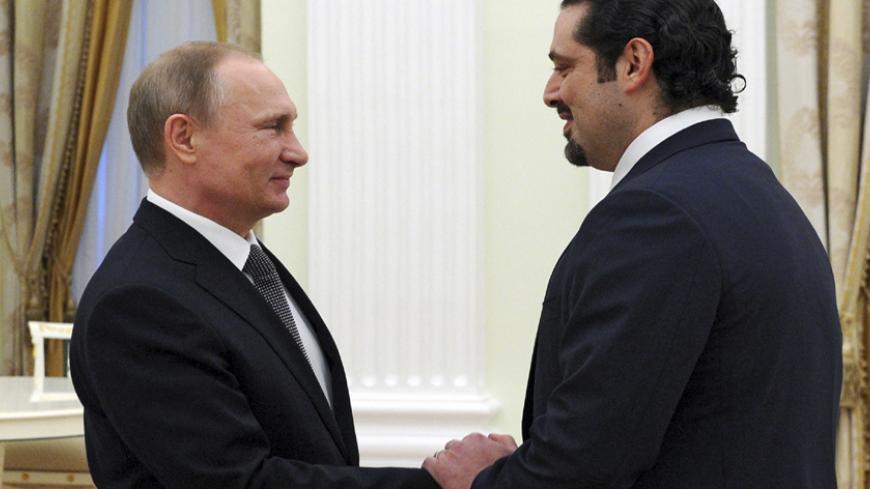 Russian President Vladimir Putin and the Hariri family have a long-standing relationship, and the Kremlin press service seemed extremely reluctant to reveal details of the visit, stating in two sentences only that Hariri “paid a private visit.”

However, the fact that Putin welcomed Hariri at the Kremlin is remarkable. It signals that the issues discussed were of profound meaning for Lebanon, Russia and a number of regional stakeholders.

Hariri has visited the Russian capital on several occasions: in August 2006 as the leader of the Lebanese parliamentary majority, in November 2010 as president of the Council of Ministers and in May 2015 during a series of top-level regional and international trips. Each time, Hariri met with high-ranking Russian authorities and business leaders to discuss extensive agendas, revolving mostly around his seeking Moscow’s mediation in the war-torn country, or soliciting Putin’s support for filling the presidential vacuum in Lebanon.

A year on, recent developments in Syria packaged the same agenda differently — two major issues in the forefront, namely Lebanon’s own political future and the Syria settlement — with several lines to read between.

Contrary to some crying-wolf stories, Russia is not interested in redrawing the geopolitical map of the Middle East, and it doesn’t have the capacity for a large-scale, comprehensive presence in the region. However, what it is interested in is keeping fragile statehoods alive, especially those with multiethnic, multi-religious and multicultural societies such as Lebanon. Therefore, Moscow’s concern over a prolonged domestic political crisis is genuine.

Russian Foreign Minister Sergey Lavrov’s call that “all problems of Lebanon should be resolved exclusively by the Lebanese people with respect to the country’s sovereignty, territorial integrity, independence and without a foreign interference” bears a tint of bitter lessons in Syria that Moscow had to learn the hard way, and that it now seeks to prevent elsewhere. On the surface, it echoes with the statement of Hariri himself about the dangers of outside presences in Lebanese politics. The problem, though, is that when Lavrov and Hariri talk about “foreign influence,” they do not necessarily mean the same forces.

For Moscow, foreign influence mostly means Western powers and Gulf monarchies promoting their vision of the Lebanese power structure. Some hard-liners in Russia go even further, arguing that the crisis in Lebanon is fueled by the United States, which “feels it needs revenge for the defeat in Syria.” For Hariri and the people whose ideas he represents, it first and foremost means Iran and Hezbollah, whose influence he and his father have struggled against.

Besides, Moscow and Hariri-loyal forces see a formation of Lebanese statehood differently. Moscow wants to preserve the current structure (a Maronite Christian as president, a Sunni as prime minister and a Shiite as the parliament speaker), fearing a change in the balance would entail a third bloody civil war. Hariri’s Future Movement, however, having close ties with Saudi Arabia, seeks a lesser Shiite (and Christian) presence in the country’s government, arguing that the social and political dynamics have shifted in the Sunnis’ favor and should be reflected in the political system. On a more optimistic note, both the Kremlin and Hariri share the belief that the longer the period of political uncertainty continues, the more opportunities will emerge for destructive forces seeking Lebanon’s disunity.

Another clear facet of Hariri’s mission was to make yet another attempt to convince Moscow to keep pressuring Syrian President Bashar al-Assad. Hariri has been an outspoken critic of Assad, calling him at one time a “monster,” and is convinced Assad is the real obstacle to a political settlement in Syria. His proposal to Moscow to virtually exclude Assad from the transition process looked like an attempt to follow up on the “Russian drawdown,” which was seen as a push for Assad to be more cooperative in the political realm. What could have been perceived as an attempt to drive a wedge between Moscow and Assad a year ago is now listened to more attentively in the Russian decision-making process, although it does not mean the Kremlin will drastically change its attitude toward Assad, especially as far as public relations are concerned.

At the same time, having invested so many military, political and image-building resources, Russia itself now has a large stake in this process. Russia becomes uneasy when the initiatives it supports, such as drafting a new constitution, are being filibustered by Assad over his own political imperatives — survival, most of all. There is an understanding in the Kremlin that Hariri is to a certain degree a messenger expressing the vision of the general Syrian opposition (both domestic and foreign) on this issue. If so, this channel represents for Moscow a political opportunity to reach out to the Sunni groups willing to embrace a greater role for Russia in Syria and other Middle Eastern affairs. Moscow might consider this opportunity, but would most likely do so without compromising its initial position, which boils down to the settlement being a process that takes two — Assad and the opposition forces — to tango, even though it is a dance in which both partners have a huge distaste for one another.

Hariri’s close ties with the Saudis made some in Moscow wonder whether he would also bring some clues about the status of the long-awaited arms deal between the Saudis and Russia — or if Hariri might only mete out information as a carrot to solicit the cooperative stance Riyadh hopes to see from Moscow on both the Lebanese and Syrian issues. However, even if that was the case, there is a growing sense in Russia that the longer this issue is used as a bargaining chip, the less assurance there is that the Saudis are serious about the proposal. Hariri himself was rather cautious about potentially giving his impression of this idea. In an interview with the Russian newspaper Izvestia after his meeting with Lavrov, Hariri declined to assess prospects for Russian-Saudi relations, saying only, “It is my hope that contacts between the two countries will be gradually improving.”

The situation in Lebanon is definitely a priority on Moscow’s radar. Yet Hariri’s hope that Russia can use its ties with Iran to secure a presidential election may be too extreme for the Kremlin. A source close to the Russian Foreign Ministry told Al-Monitor following the talks that “some in Moscow were questioning whether Hariri genuinely understands that the Kremlin can change little in the relationship between Tehran, Damascus and Hezbollah, or he may just conclude that Moscow is reluctant to change anything. We have seen this movie before when he wanted Moscow to pressure Israel to stop bombing Lebanon in 2006. But he may just fall prey to all the talk about Russia’s skyrocketed capabilities in the region."

In this regard, Hariri probably does reflect a broader sense across Sunni communities that Russia can play a more constructive role in regional peace-building and should capitalize on its recent political gains in Syria to deliver on this “mission” across the Middle East. That expectation may indeed have been based on a general perception of Russia as an omnipotent player, and Putin as “a Middle Eastern Caesar,” as some in the region have come to call him. But it — to a certain degree — overestimates Russia’s relations with both Iran and Israel, as well as Moscow’s ability to exert power over Hezbollah. Certainly, the Kremlin has at times better leverage in relations with the “difficult partners,” but this leverage isn’t as big as some in the region and the West think — and Russia will not abuse this leverage, especially if its interests are not at stake.