With the worsening of the Lebanese crisis, Russia will have to take a closer look at Lebanese affairs to protect its assets in Syria. 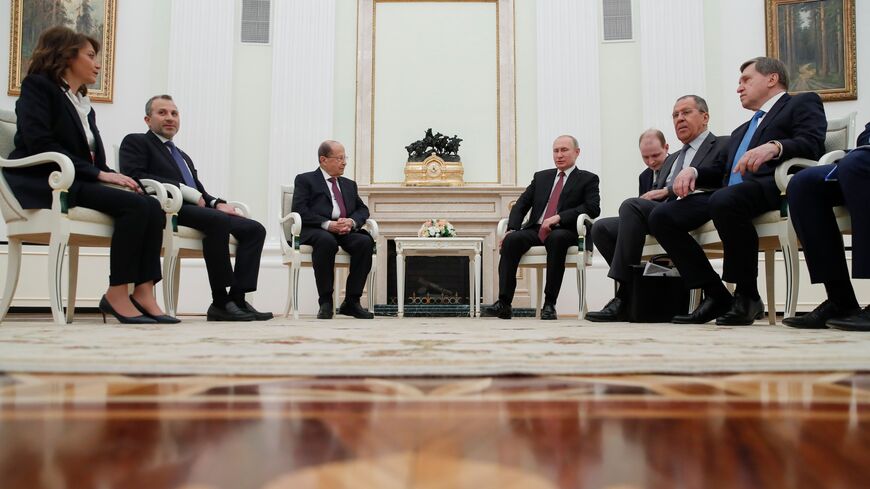 In recent weeks, Russia has been showing greater interest in Lebanese affairs, specifically when it comes to breaking the political deadlock between President Michel Aoun and Prime Minister-designate Saad Hariri. What is Russia's game plan for Lebanon?

Several meetings between Aoun and Hariri have ended in failure, with Hariri denouncing the president’s attempts to stall the Cabinet formation process. The two leaders appear divided on whether one-third of the next Cabinet should be under control of the president; this could give Aoun and his allies greater control over the next presidential elections in 2022.

Russian officials have held a number of meetings with Lebanese politicians in the last few months and have been issuing statements on the Lebanese crisis. As the Lebanese Cabinet formation stalemate persists, Moscow is increasingly looking to engender progress in Lebanon to protect Russian assets in Syria.

“Moscow sees Lebanon as a vulnerability for Syria, given the social and economic interconnection between the two countries,” said Nabil Bou Mounsif, a veteran journalist in Lebanon.

In Moscow on March 15, Russian Foreign Minister Sergey Lavrov discussed the situation in Lebanon and the Middle East with a delegation from Hezbollah led by Mohammed Raad, who heads the Hezbollah’s parliamentary bloc in Beirut. Russia is fighting in Syria alongside Iran and others such as Hezbollah.

Anton Mardasov, a researcher at the Russian International Affairs Council, told Al-Monitor that while Moscow sees its interests in Lebanon and Syria as being linked, he thought the Hezbollah visit was mainly focused on Lebanon and not Syria.

He said the visit helped Moscow show it is a player that can negotiate with all parties — the visit of the Hezbollah delegation coincided with the visit of the Israeli delegation, "and this is hardly a coincidence. On the other hand, Moscow is deliberately stirring up rumors in the region to increase its political weight: After all, many observers began to write that Russia allegedly ordered Hezbollah to reduce activity in Syria — this, of course, is not true — and Hezbollah representatives even said that they had troops on Khmeimim air base, in order to refute the contradictions with the Russians.”

Anna Borshchevskaya of the Washington Institute for Near East Policy viewed the visit differently, telling Al-Monitor that Moscow may be trying to play kingmaker by leveraging the situation to create a bigger role for itself. She said that when someone is in a weak position like Hezbollah, they are more likely to give Moscow greater access to the Lebanese file.

Hezbollah has been facing increasing challenges in Lebanon since the country’s economic collapse in March 2019. This was accompanied by wide protests denouncing the political class, including Hezbollah.

She said, “For Moscow, two things are important with regard to access in Lebanon: first, insofar as it helps to ensure Moscow's influence in Syria and Assad's survival — through its banking system, to give one example — and second, Lebanon's strategic location on the Mediterranean as well as its Christian minority with which historically Russian rulers worked to build links and extend the influence of the Russian Orthodox Church.”

Given its proximity to Syria and long-standing relations between some of Lebanon’s dominant parties and the Assad regime, Lebanon has become an economic conduit for the Russian regime. Lebanon’s stability has thus become one of Moscow’s preoccupations.

Bou Mounsif said Lebanon’s monetary and financial crisis has been directly linked to a further devaluation of the Syrian pound.

In November, Syrian President Bashar al-Assad said billions of dollars deposited by his countrymen in Lebanon’s financial sector had been lost after the financial crisis. Syria also depends in part today on dollars smuggled from Lebanon. Subsidized fuel, wheat and basic food items are also smuggled daily to Syria.

This helps explain recent Russian direct comments in support of the formation of Hariri’s government.

Russian Deputy Foreign Minister Mikhail Bogdanov, who met with with a number of Lebanese officials concomitantly with Hezbollah’s visit, said, “It is time for a settlement that goes toward forming a government.”

A month earlier, the Russian Foreign Ministry had stressed the need for the urgent formation of a government headed by Hariri.

Borshchevskaya said, “Moscow was always interested in playing a greater role in Lebanese politics, and these latest steps only confirm that this is still the case. Moscow is looking at Hariri as someone who can ensure its interests. Recall that in late 2018, Hariri accepted Russia's military aid. For years prior to that, Beirut had declined such offers from Russia, and the acceptance mattered symbolically far more than its actual dollar value.”

Borshchevskaya said Hariri and other Lebanese leaders tend to see Russian President Vladimir Putin as a mediator capable of providing an indirect channel between the Syrian regime and its Lebanese adversaries. “This is the hallmark of Putin's approach to the Middle East, and it is playing itself out in Lebanon as well; he is working to position Russia as a mediator by working with all major actors on the ground, and to build leverage,” she said.

Under this approach, Russian support for Hariri is seen as rooted in the defense of Russia’s interests in Syria. The more the Lebanese political crisis endures, the more the economic crisis will hit Syria. As Syria is already in tatters, this makes Assad's regime — which Moscow has long fought to preserve — even more fragile.

Mardasov said, “It is clear that Russia perceives Lebanon as part of the Syrian track, so Moscow will strive to continue playing in this field in order to capitalize on its influence after intervening in the Syrian conflict. One of Russia's main goals in the Middle East is not to lose influence after Syria.”

For Bou Mounsif, this means that Moscow will come to play a greater role in Lebanon as the situation worsens.