A Hezbollah delegation visits Moscow, with Lebanese politics and stability and Syria's political future atop the agenda. 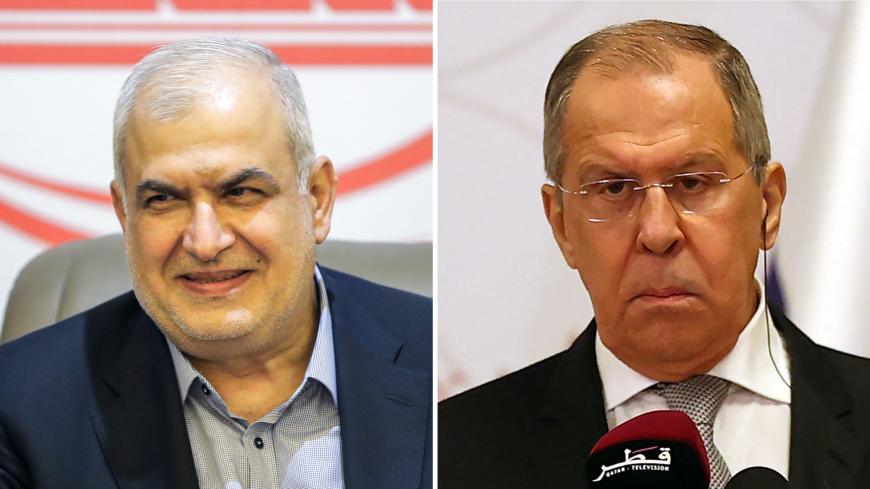 A delegation from Lebanese Hezbollah, led by the head of the movement’s parliamentary bloc, Mohammad Raad, arrived in Moscow on March 14 for a four-day visit that came on the eve of the 10-year anniversary of the start of the Syrian war. On March 15, the delegation, which included Hezbollah’s foreign relations chief Ammar Al-Moussawi and his aide Ahmad Mhanna, was received by Russian Foreign Minister Sergey Lavrov. The delegation also had separate talks with Mikhail Bogdanov, a Russian deputy foreign minister and the special presidential representative on the Middle East.

By a strange coincidence, the Hezbollah delegation’s visit to Russia occurred almost simultaneously with the visit of Israeli Foreign Minister Gabi Ashkenazi, who arrived in Moscow on March 17. Moreover, Hezbollah’s talks with Lavrov were held the same day that two Russian deputy foreign ministers — Oleg Syromolotov and Sergey Ryabkov — met with the Israeli Foreign Ministry's deputy director general for strategic affairs, Joshua Zarka. Syromolotov, a former chief of the FSB Counterintelligence Service who rose to the rank of army general, oversees measures against terrorism. So this string of meetings looks like more than just a coincidence and makes for a rather awkward situation.

Any official contacts between Moscow and Hezbollah have the potential for causing an uproar. The problem is not just the status of the movement, which many countries, including Israel, consider to be terrorists. It is also the nature of Hezbollah’s relations with the Russian diplomats, security officials and intelligence services. One can recall the scandal that broke out in December when the Russian ambassador in Israel, Anatoly Viktorov, blamed Israel for destabilizing the situation in the Middle East to an even greater extent than Tehran. Viktorov also tried to vindicate the Tehran-allied Shiite military-political organizations, most notably Hezbollah. Once a rival force that kidnapped and murdered Soviet diplomats, Hezbollah has turned into the Kremlin’s ally in "fighting terrorism." Moscow took steps to smooth out the situation around Viktorov’s comments. Yet such rhetoric — not the first such statements on Hezbollah coming from Russian diplomats — is not explained solely by the discretion of a particular ambassador but by the specifics of Russia’s presence in Lebanon and by Beirut’s role in circumventing sanctions against Damascus.

The last few years saw Moscow performing a delicate balancing act. On the one hand, it has sought to deny Hezbollah’s participation in drug trafficking; at the same time the Russian military was conducting joint missions with Hezbollah militias. A case in point is the takeover of East Aleppo, where Russian special forces and Hezbollah fighters acted together. Indeed, Russian forces were allowed to disguise themselves as Hezbollah fighters for some operations. Hezbollah units, in turn, were granted permission to raise the Russian flag for cover from Israeli airstrikes. Still, the Russians did not raise particular objections to Israeli’s airstrikes against mobile targets. Moscow also feels obliged to monitor the arms traffic from Syria to Lebanon and to constrain Hezbollah’s actions both in the Damascus airport area and in the southwestern provinces.

Hezbollah’s visit March 15 is only the movement’s second official trip to Moscow. The first came in October 2011. Both delegations included Raad, a close ally of Hezbollah chief Hassan Nasrallah. Given the time lag between the two trips, it is only logical to compare the incentives for the movement's visits to Russia, especially considering that there was no lack of contacts between Moscow and Hezbollah representatives on Lebanon’s soil in the intervening period.

While the first Hezbollah delegation arrived upon the invitation of the Russian parliament, the talks were shrouded in secrecy. That clandestinity was understandable as Hezbollah was trying to gauge Russia's positions on two key points. The first was the extent to which Moscow accepted Shiite "red lines" on cooperation with the Netherlands-based Special Tribunal for Lebanon, which sought to investigate the 2005 assassination of Lebanese Prime Minister Rafic Hariri. Second — and perhaps most important — Hezbollah sought to gauge the level of Moscow's backing for the regime of Syrian President Bashar al-Assad. Russia’s motives at the time were unclear, especially given Moscow’s abstention on the UN Security Council vote on the Libya dossier. In 2011 Russia claimed it had no interests in Syria, while its experts pondered over the possibility of a bloodless coup in the country against Assad. According to some rumors, even Hezbollah did not have a united opinion on the extent of the support it should lend Assad, with critics concentrated in the movement’s political wing.

This time around, Hezbollah’s trip was more open to the public eye. Raad described his 40-minute talks with Lavrov as "open and frank." Perhaps that description is indeed true, although there are opinions to the contrary (and not just among Russian observers).

Journalists cite two particular reasons that warranted the Hezbollah representatives’ visit to Russia. One issue relates to the French plan for overcoming the political crisis in Lebanon. Lavrov publicly supported the initiative. In his talks with Hezbollah, the Russian foreign minister also emphasised the importance of creating a new government headed by Saad Hariri that would help the country resolve its systemic crisis. Keeping in mind the recent visit to Moscow of Amal Abou Zeid, an adviser to president Michel Aoun, the journalists argue that Moscow’s real aim was to persuade Hezbollah, Aoun and his son-in-law Gebran Bassil to stop sabotaging the state-building process in Lebanon that is now under way.

The other problem concerns the Syrian war. Moscow is growing tired of the conflict. Yet its plan for attaining peace presupposes that Iran and Hezbollah would somehow freeze their activity in the region.

Ostensibly, those arguments are appealing and logical. Yet they also oversimply the situation somewhat. First of all, it indeed looks like Russian sought to postpone Hezbollah’s visit to Moscow because of Lavrov’s trip to the Middle East, Thus, the timing of the meeting with Hezbollah is not linked to the talks with Hariri. Second, Russia has its own stake in Lebanon. Moscow seeks to grow its clout both via soft-power tools and via deploying politico-economic projects implemented by the companies Rosneft and Novatek. Yet, as is usually the case with Russia, all those projects have a goal of consolidating Moscow’s position against the backdrop of weakened competition, not much more. Third, Moscow would probably prefer to side against the French plan for Lebanon, while continuing to brief the media against French President Emmanuel Macron’s initiatives. But Moscow likely prefers not to publicly criticize any constructive offers given the rapidly deteriorating situation in Lebanon and the problems this creates for the Syrian currency. Fourth, Russia is probably trying to legitimize Assad’s regime through raising the prospect of a decline in the Iranian presence in Syria, even though both Tehran and Hezbollah realize they are firmly established in the country.

It is obvious that the current state of relations between Lebanon and Russia requires that players coordinate their positions, especially in the runup to the elections in Syria and intensifying yet groundless rumors that predict the return to the Syrian scenario of the military council headed by Brig. Gen. Manaf Tlass, who switched to backing the Syrian opposition in 2012. Russia also has yet to give a response to Lebanon's request for 200,000 doses of the Sputnik V vaccine.

However, the key issues uniting Russia, Iran and Hezbollah are the political impasse in Lebanon and the future of the Assad regime. Assad has managed to survive, but he cannot gain control over oil and agricultural resources in the east of the country and solve the problem of economic self-sufficiency. Both these conundrums are hard to resolve without serious compromises. And those come at a higher cost than intervening in a foreign war.