Iran is lauding its own efforts to achieve the cease-fire that temporarily halted Operation Decisive Storm in Yemen and warns that continued Saudi aggression threatens to block a political solution. 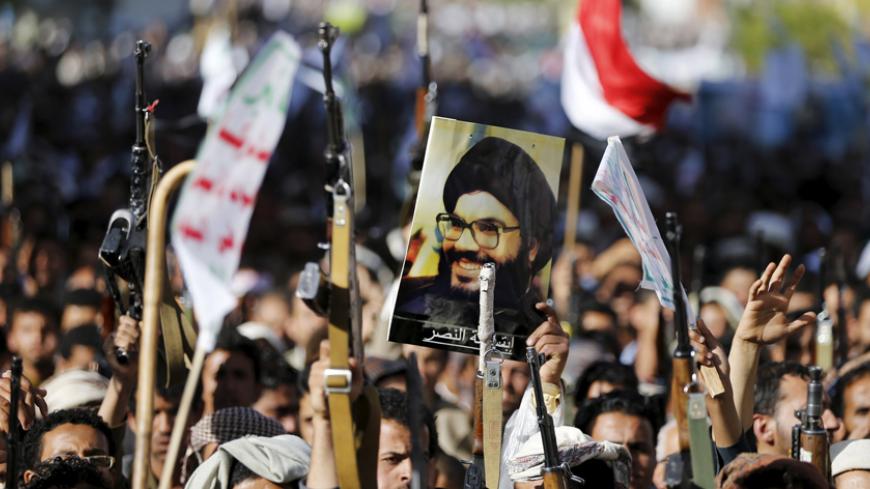 A follower of the Houthis holds up a poster of Lebanese Hezbollah leader Hassan Nasrallah during a demonstration against the Saudi-led airstrikes in Sanaa, April 22, 2015. - REUTERS/Khaled Abdullah

Hours before Saudi Arabia officially announced the end of Operation Decisive Storm, the military operation against the Houthis in Yemen, Iran’s Deputy Foreign Minister Hossein-Amir Abdollahian expressed his optimism “that due to our efforts,” a cease-fire would be reached in the coming hours.

The cease-fire has been reached, and as is the case with most wars in the region, both the Houthis and the Saudi-led coalition are celebrating their victory. So are the Iranians, who raised the stakes so high during the past three weeks that Supreme Leader Ayatollah Ali Khamenei, who is known for being cautious in his speeches, warned Riyadh that its nose was going to be rubbed in the mud of Yemen.

What happened in the last few hours before the cease-fire?

According to an Iranian official who spoke to Al-Monitor on condition of anonymity, “If this war continued for a few days more, it would have been very difficult to reach a cease-fire.” He explained, “Ansar Allah was keen not to take the battle to another stage. Yet if the Saudis continued this way, they would cross the red lines they drew for themselves. This is what was conveyed to the Saudis through mediators.”

The source revealed that Oman played an important and effective role in bridging gaps between the warring parties. He said, “Oman offered to host any future dialogue, while its foreign minister and his team tailored an initiative that should be a road map for a solution in Yemen. This initiative, along with Iran’s message to Riyadh, created an environment appropriate for a cease-fire.”

Iran conveyed a serious message to Saudi Arabia, that the Houthi movement is capable of responding to Saudi coalition air raids on Yemen inside Saudi Arabia through its mid-range missiles and anti-aircraft rockets that had not yet been used. A Houthi source in Sanaa told Al-Monitor over the phone that the group’s leadership decided to adopt what it called strategic patience in an attempt not to make a consensus difficult. “It’s not our objective to hit the Saudis or attack posts inside Saudi Arabia. We did it back in 2009, and we are capable of doing it today,” the source added. “What we want is going into a dialogue and ridding our country of al-Qaeda, and that’s why we didn’t stop advancing from one city to another, despite the war on us.”

This is the message the Iranians conveyed through a third party April 21, while Iran’s Foreign Ministry spokeswomen Marzieh Afkham revealed in a press release that Foreign Minister Mohammad Javad Zarif held a phone discussion with US Secretary of State John Kerry over Yemen. Some media reports suggested Kerry told Zarif the United States is interested in containing the situation and will convince Saudi Arabia to cease fire and in return will help in the political dialogue.

Abdollahian told Al-Monitor, “While the 27-day war that Saudi Arabia launched on the people of Yemen will remain a dark point in the history of the region, the resistance and patience shown by the people of Yemen was a turning point.” He added, “Iran exerted serious efforts to end the war and the humanitarian tragedy taking place in Yemen. Iran backs a political path and stresses the importance of dialogue.”

Abdollahian warned, “If Saudi Arabia continues its aggression on Yemen, this will block the political path. This will pose a real threat to regional security and stability.” He called on the United Nations and the international community to pressure Saudi Arabia to change “the current wrong path.”

According to Abdollahian, “The Saudi strikes against the Yemeni people have paved the way for increasing terror activities in the violence-wracked country." He added, "The kingdom’s raids actually target Yemen’s infrastructure and the people who are fighting against the terrorists.”

Abdollahian also denounced as “totally baseless” the allegation that Tehran is providing arms to the Houthi movement's Ansar Allah fighters, saying that the presence of Iran’s naval forces in the Gulf of Aden falls within the framework of international regulations. “Iran’s policy is to help promote peace, security and stability in Yemen and the whole region,” he said.

Once again it’s clear the Iranian-Saudi struggle over the region is getting more complicated with the new crises emerging. For the last three years, Iran has been directly involved in the Syrian war and since last year in Iraq’s war against the Islamic State, while Saudi Arabia intervened in Bahrain and on March 26 started an aerial campaign to restore its ally, Yemeni President Abed Rabbo Mansour Hadi, who resigned Jan. 22 and after a few weeks fled to his hometown of Aden, where he annulled his resignation.