The Ministry of Education official responsible for burning several books in the yard of a Giza school defended herself to Al-Monitor and asserted that she operated under the direction of the ministry and security agencies. 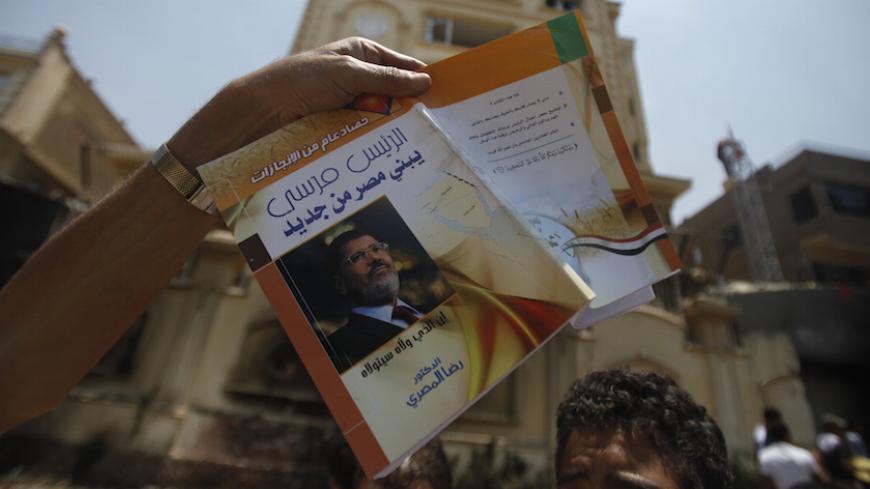 The Directorate of Education in Giza, which is affiliated with the Ministry of Education, burned 82 mostly religious books in the yard of the Fadl Modern School in the Faisal area of al-Haram, Giza governorate.

The ceremonial burning to the tune of patriotic songs took place on the grounds that the books incite extremism and terrorism and that some of their authors, such as Rajab al-Banna and Mohammad Mohammad al-Madani, belong to the Muslim Brotherhood. The act triggered anger among Egyptian popular and human rights circles.

Khashak said that based on information she received from Tariq Hussain al-Khudri, the director-general of al-Haram Educational Management, there are books inside Fadl Modern School that violate the rules forbidding the incitement of violence or sex or the defamation of religions. She asked the general manager to form a committee under his chairmanship to remove these books and to list their names.

The committee confirmed that the books violated the rules for school libraries. She said, “And when I examined the list, I told them there are still books that are not authorized for schoolchildren. I have those books in my home library, such as 'The Approach to Islamic Reform' by former Al-Azhar Sheikh Abdul Halim Mahmud. They told me that the book’s outside cover has the name of the honorable Sheikh Abdul Halim Mahmud but that the book’s content was distorted and that the Rabia symbol appears inside the book. So I personally went to the school to make sure of the matter. I spent four hours browsing these books and then I contacted the security authorities and informed them that there are distorted books. I asked the security official whether I should send these books to the Security Directorate or to the Ministry of Education. He told me that they would revert back to me. I was contacted by a security official, who asked me to form a committee to destroy the books and write a report about their contents.”

Khashak explained that the book burning was a patriotic moment, accompanied by patriotic songs in the presence of children. She said that it was one of the happiest moments in her life, because burning these books saves the children’s minds from extremism and terrorism.

Kashak told Al-Monitor that the school’s owner, Adel Fadl, and his son, Amro, were detained by al-Haram police department on charges of inciting parents and students to protest and for trying to forcibly enter the school with journalists to cover the event. Fadl and his son have now been released after questioning.

Ahmed Salim, the undersecretary of the Ministry of Information and the chairman of the agency that monitors publications and foreign newspapers, told Al-Monitor that the book burning in the schoolyard in the presence of children and the celebration of the act was an ugly scene that no cultured person would accept. He said, “The lady, who is the ministry’s undersecretary, could have [protested] those books, discussed their contents with the children and refuted the [books’] ideas. Regarding burning books in front of children to prevent extremism, I think that this action would help spread extremism. How we can teach our schoolchildren to fight ideas with ideas while at the same time we celebrate the burning of books in front of them?”

The Egyptian Publishers Union condemned the incident in an official statement, describing it as a "pathetic" scene. The undersecretary read the statement, was accompanied by a group of officials from the Directorate of Education in Giza, who celebrated the burning of books to the sounds of patriotic songs and carrying the Egyptian flag. The Egyptian Constitution, whose flag they waved and to which they sang their love, states in Article 67, "No literary or intellectual work may be confiscated without a court order regardless of its content." So according to the constitution, these books cannot be confiscated or burned. Instead, legal action may include informing the public prosecutor or consulting the relevant authorities, such as Al-Azhar, about the content of these books.

The Egyptian Publishers Union denounced this irresponsible behavior and said that it was awaiting the investigation ordered by the minister of education, and that it hopes the matter will end in punishment for an act that violated the constitution.

For its part, the Egyptian Ministry of Culture issued a statement denouncing the book burning in Fadl Modern School, saying that the act recalled the burning of Ibn Rushd’s books in Andalusia in 1198 under the pretext that they incited heresy. The statement described the incident as a form of “intellectual terrorism” and called it an act that ran “against freedom of creativity and thought.”

The contradiction in the views of the Egyptian Ministries of Education and Culture reveals that there is no coordination between the Egyptian ministries. It is as though each ministry is working as part of a different government. Even stranger, there is no coordination within ministries. The undersecretary of the Ministry of Education confirms that the incineration of books happened with the knowledge of the minister of education. However, the latter issued a decision to refer the undersecretary for investigation. Allowing political scores to interfere in education may have grave consequences on the children, who are the hope of this nation for a better future.