How Egypt is promoting education for Syrian refugees

The efforts of the Egyptian government to integrate Syrian students in Egyptian schools aim to make the students feel welcome. 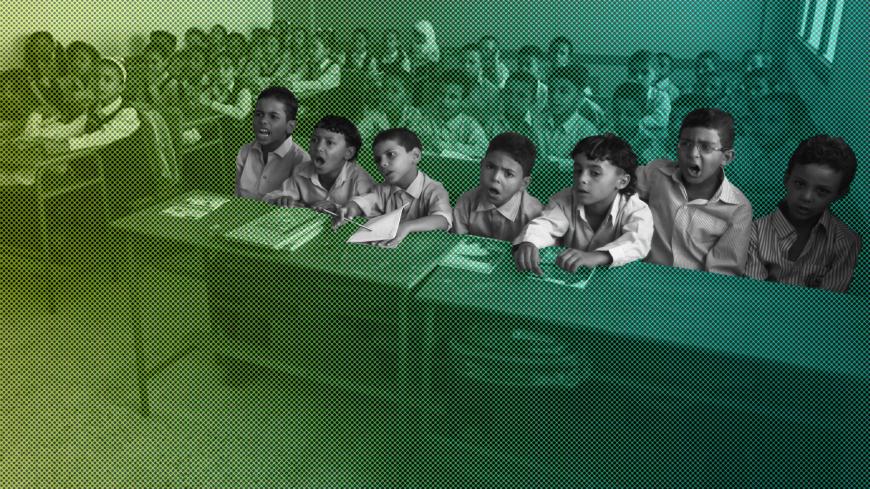 Students attend a class on the first day of their new school year at a government school in Giza, Egypt, Sept. 22, 2013. - REUTERS/Mohamed Abd El Ghany

CAIRO — On Aug. 24, the General Administration for Community Participation affiliated with the Education Ministry organized orientation lectures for Egyptian and Syrian students and their parents at one of the schools in the 6th of October Educational Administration in Giza governorate.

The lectures were part of the “Education in a Safe Environment” project under the auspices of the Plan International organization and in coordination with the Canadian Embassy. These efforts aim at supporting Syrian students, setting the stage for their education and offering them and their parents social and psychological support in addition to economic aid. The project encourages communication between Syrian students and their Egyptian peers in Egyptian schools.

In 2012, during his opening speech at the 138th session of the Arab Foreign Ministers Council in Cairo, former President Mohammed Morsi announced that Syrian students would be charged the same school fees as Egyptian students at public schools. Previously, foreign students had paid higher fees.

According to the estimates of the United Nations High Commissioner for Refugees in 2015, Egypt recorded the highest school enrollment rate for Syrian refugee children, at about 85%, amounting to 39,314 Syrian students.

Baksawi Mustafa, the director general of the 6th of October Educational Administration, told Al-Monitor, “My educational administration has the largest number of Syrian students in Egyptian schools in the whole country because many Syrians live in 6th of October City in Giza. Their numbers are not known precisely but are estimated at around 5,000 students.”

He noted that awareness "is essential, through [orientation] lectures for integration and creating a spirit of harmony among Syrian and Egyptian students. These lectures also aim at highlighting the nature of curricula in Egypt so that Syrian students can understand them, as school education differs between Egypt and Syria.”

Mustafa added, “The Ministry [of Education] gives us the freedom to coordinate with civil society organizations to offer financial and psychological support to Syrian students to eliminate the differences among them or with Egyptian students.”

The Egyptian government represented by the Ministry of Education and the Ministry of International Cooperation held a meeting in 2015 with four international parties — the Canadian Ministry of Foreign Affairs, Plan International Egypt, Care Association and Save the Children. The meeting was held within the scope of the work of the Higher Coordination Committee of the “Education in a Safe Environment” project in order to meet the pressing educational needs of Syrian students.

Imad al-Wassimi, the head of the Public Education Sector at the Ministry of Education, said during his speech at the 2015 meeting that the ministry wants to work with civil society groups as main partners to promote the educational process in Egypt. He pointed to the efforts the ministry is making to integrate Syrian students in schools and make them feel that Egypt is their second home.

Plan International Egypt had announced in a press statement in June 2016 that “Education in a Safe Environment” will be implemented over two years with the aim of giving about 28,900 Syrian and Egyptian children ages 4-14 the right to education. Around 14% of targeted children are Syrians in 40 schools, including 25 public schools and 15 private ones. The project is implemented in the Cairo, Giza, Alexandria, Qalyubia and Damietta governorates.

The statement noted that the project will support marginalized children by giving them money to buy school stationery, offering them intensive classes, conducting campaigns to urge them to enroll in school and building the capacities of teachers.

In October 2016, the project was implemented in the Qalyubia governorate in eight schools — four in primary education and four in elementary education. School directors and psychologists were trained on active education, problem solving and tolerance to support the Syrian students and to integrate them in Egyptian society.

Medhat Massaad, an educational expert and the former undersecretary of the Ministry of Education, told Al-Monitor, “We have been welcoming Syrian students in Egyptian schools since 2012, and there have always been instructions to treat Syrians and Egyptians alike. Therefore, it was necessary to emphasize awareness — to integrate Syrians and raise awareness among them and Egyptians as well as teachers to take it easy on Syrian students.”

He added, “It is important to capitalize on governmental efforts as well as initiatives from civil society organizations to integrate Syrian students in Egyptian schools.”

Massaad added, “The government’s efforts are good, but two things must be kept in mind. First, Syrian students should be admitted to schools close to their place of residence to reduce pressure on them. Second, they should be admitted to these schools even if they are overcrowded, by opening new classes.”

Ghatfan Khair, a Syrian teacher and guardian of a Syrian student in one of Egypt’s public schools in 6th of October City, told Al-Monitor, “Egyptian schools are making remarkable efforts to integrate our Syrian children through different activities mainly focusing on the psychological condition of the Syrian student.”

He added, “My children did not feel any discrimination between them and Egyptian students. Instead, Syrian students are always appreciated and loved whether inside or outside school.”

The efforts of the Egyptian government to integrate Syrian students in Egyptian schools are diverse and comprehensive. They also take into consideration the social, psychological and economic state of these students and their parents so that they do not feel estranged among their Egyptian peers.