A team of 20 Syrian volunteers is helping displaced children in Cairo deal with the trauma of war. 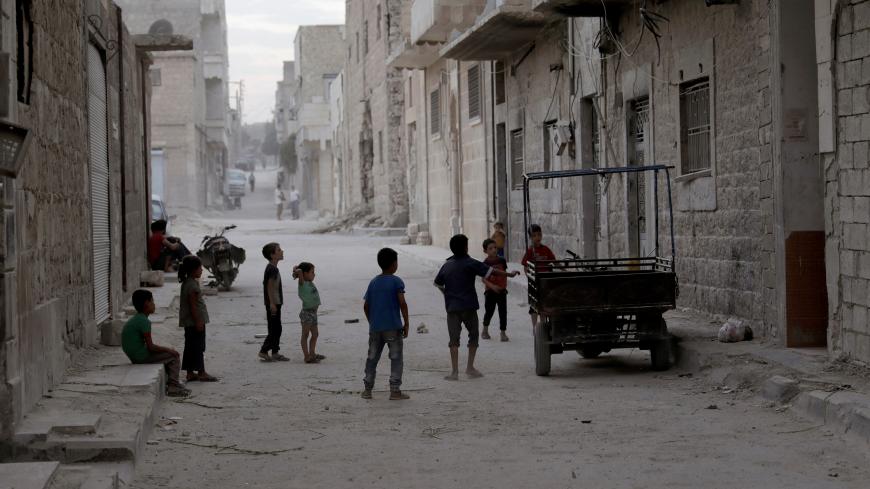 Children play in a street on the southern outskirts of al-Bab, Syria, Sept. 16, 2017. - REUTERS/Khalil Ashawi

CAIRO — The original impetus behind Insan, an initiative launched in 2013, was to provide psychological treatment to Syrian children in Egypt suffering from the trauma of the civil war in their home country. In November, the team of Syrian university students currently involved in the program announced that it would now be open to other children who have sought refuge in Egypt, including from Sudan and Yemen.

Team member Abbi Mustafa, a Syrian national and sixth-year medical student at Ain Shams University, told Al-Monitor, “During the [Syrian] war, these children had no access to any psychological support.” The team therefore seeks to provide psychosocial assistance for psychological trauma stemming from fear, loss of friends and family members and seeing or experiencing violence.

Insan — Arabic for “human” — targets children aged 6-18. “They are the most vulnerable,” Mustafa said. “These asylum-seeking children are affected by the aftereffects of war, alienation, instability, physical and familial pressures. They are unable to express their psychological needs in the absence of parental understanding.”

Insan has so far engaged 3,000 Syrian children, with another 2,000 having been added to its program. “The team is currently focusing on displaced Sudanese and Yemeni children,” Mustafa said.

The program was founded by Areej al-Tabaa, a Syrian psychologist who lives in Saudi Arabia. The team now running it consists of 20 volunteers. A number of them are participating on a full-time basis. They include medical students in addition to psychologists and speech therapists. Insan does not have an office, so team members meet in various locations, such as the schools where they conduct workshops and other programs.

The children selected are identified "through schools participating in the initiative, especially schools allocated for Syrian students, and through children's centers scattered across Cairo," Mustafa said. The teams approach school administrations about the possibility of participating in Insan. If the school accepts, the administration allocates hours for Insan activities while school is in session. The team also has a relationship with UNICEF in Egypt, where the Insan team holds sessions for children in UNICEF centers during the summer and other periods when children might have free time.

With UNICEF's support, the team has created and implemented programs consistent with globally accepted practices and treatments developed by reputable psychologists and physicians. Mustafa identified the five programs and approaches currently in use as the Five Needs of Adolescents and Children, the Child Psychological Support Program, the Loss Management Program, the Self-Expression Program and the Karemni Harassment Awareness Program.

Two or three members of the team work with a group of children, engaging them in activities that help and encourage them to express their feelings, such as through storytelling, role playing and drama. They are also encouraged to lead.

The team has built relationships and networks with Syrian, Egyptian and international nongovernmental organizations in Egypt to facilitate the delivery of services to the targeted children through joint coordination. Trying to extend its network beyond UNICEF, Insan established a partnership with Terre des Hommes and the Syria Al Gad Relief Foundation. Insan and its partners are, however, limited by insufficient financing, lack of media coverage and sometimes non-cooperative parents.

To assess the program's effectiveness, Insan distributes questionnaires to parents and teachers before and after activities and tracks children’s development throughout the workshops provided. The team hopes to one day expand to localities in the country beyond Cairo and to offer its programs and workshops to Egyptian children.

The Egyptian government has also taken steps to help Syrian students integrate. In August, the General Administration for Community Participation, under the Ministry of Education, organized lectures targeting Syrian and Egyptian students in 6th of October City within the scope of the project Education in a Safe Environment, whose goal was to support Syrian students and provide them (and their parents) with psychosocial and economic support. Egyptian students were included to encourage communication between them and the Syrian youths.

On Nov. 7 at the World Youth Conference in Sharm el-Sheikh, Egyptian Minister of Social Solidarity Ghada Wali spoke at a session on Egypt's experience in hosting refugees, noting that there are approximately 40,000 Syrian students enrolled in Egyptian schools and some 14,000 registered at Egyptian universities.

Tayseer al-Najjar, founder and head of the Syrian General Authority for Refugees — an outfit that helps Syrian refugees in Egypt by providing legal advice and food and organizing cultural activities — sang Insan's praises for its relevance.

“We are ready to provide all the assistance needed by the team and to host the children and provide them with therapy sessions,” Najjar told Al-Monitor. “Most Syrians do not have access to psychological support. This initiative offers support through specialized therapists.”

He added, “Egypt is a safe environment for Syrian [children] who are trying to integrate into Egyptian society, especially since Syrian refugees in Egypt are living among Egyptians and not in camps like in other Arab countries. It is therefore important to have activities and initiatives that help integrate Syrians into Egypt’s society either by helping them financially or psychologically.”

Najjar said the priority should be offering psychological treatment to Syrian mothers, who are typically responsible for the education of their children and who suffer from health and financial problems. He said they are in dire need of psychological support.

The six-year-long Syrian war that erupted in March 2011 has internally displaced more than 6 million people. According to a 2015 study by the International Medical Corps, 54% of displaced Syrians, internally and abroad, suffer severe emotional disorders.

Ahmed al-Behairy, a psychiatry consultant, spoke to Al-Monitor about how war affects children. “Children are susceptible to post-traumatic stress disorder, whose symptoms include depression, anxiety, sleep disorders, emotional disorders, such as psychological identity disorders, psychopathy and hysteria,” he said. “All this adversely affects their future even after the end of the war.”

Behairy said it is important that civil society focus on helping children who grow up in times of crisis or a war environment. “Helping these children requires teams of specialized psychiatrists and social workers,” he said. “It is also important to have psychological centers and hospitals that offer [children] this support, since physiological therapy may take a long time.”