A speech therapist in the Gaza Strip has found a way to help children across the Arab world, especially Syrian refugees. 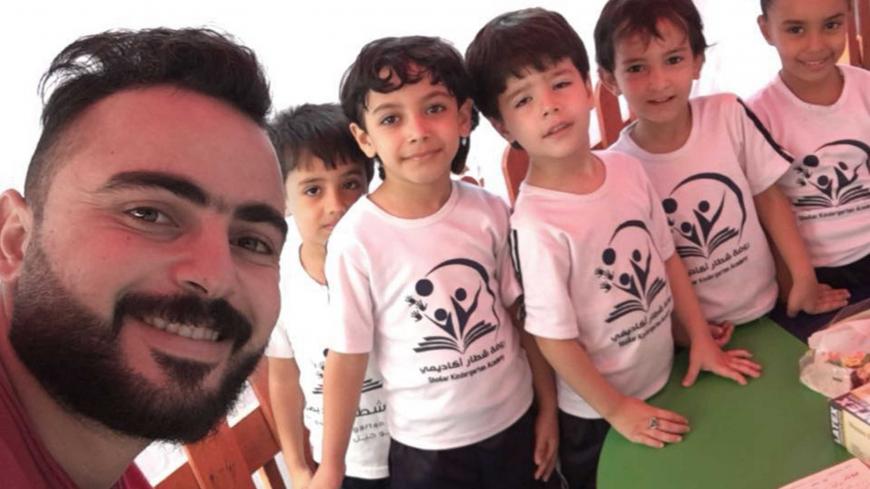 Speech therapist Mohammed al-Hayek is seen with some patients in an image uploaded Oct. 22, 2017. - Facebook/mohammed.r.h99

Speech therapist Mohammed al-Hayek is treating several children from different Arab countries, including Syrian children displaced to Turkey and Lebanon, from behind his computer screen in the besieged Gaza Strip.

Hayek, 29, began his career as a speech therapist after graduating from the department of Rehabilitation Sciences at the University College of Applied Sciences in the Gaza Strip in 2009. He then joined local projects under the auspices of the International Committee of the Red Cross (ICRC), which examined the speech of primary school students in institutions affiliated with the United Nations Relief and Works Agency.

“At first, my job was only to examine the children. After I proved myself, the project manager transferred me to the pediatric speech therapy department. During my work with the ICRC, I came across a large number of students with speech problems. Because speech problems emerge between the ages of 4 and 6, I then focused on private kindergartens,” Hayek told Al-Monitor. Today, he works with eight schools altogether.

He added, “I visit each kindergarten two days a week and created a Facebook page where I give people advice and post photos of me working with children, in order to promote my work as much as possible.”

Hayek said he was able to treat 6-year-old Nada, the first girl to receive a cochlear implant in the Gaza Strip. After the surgery, she still had trouble pronouncing some sounds. Her treatment with Hayek at the Balsam Association lasted for four months after the implant.

He noted, “One day, a Syrian refugee living in Lebanon contacted me through the page and told me that her daughter had trouble pronouncing 10 different sounds. I diagnosed the girl over a video call and we began daily treatment sessions for three weeks, after which she fully recovered.”

Hayek added, “The mother then posted on the page a thank-you note for treating her daughter and thanked me for offering my services for free. After that, many mothers from several Arab countries such as Jordan, Tunisia, the occupied West Bank, Lebanon and Iraq contacted me about their children. I also treated a 30-year-old Algerian man who had speech problems.”

He explained that the appearance of speech problems among so many refugee children can be attributed to trauma.

Despite Hayek’s success, he faced several challenges, including power outages for over 20 hours a day and a weak internet connection, which made it hard to communicate with patients over low-quality videos.

Rana Shaker, 26, an Iraqi from Basra, told Al-Monitor her son had stuttered since he was 3. She took him to several speech therapists in Iraq, but they could not help him. They told her, correctly, that his stuttering would get worse with time. When Shaker’s son was 10 a year ago, she learned about Hayek, who managed to treat him. She said, "I stumbled upon Hayek by chance on Facebook and he treated my son for free via video calls over two months. Now his stutter has completely disappeared, thank God.”

Shaker, however, pointed out that the treatment sessions were often delayed because of the electricity crisis and unreliable internet service in Gaza.

Darin Abdul Jawad, a 29-year-old Syrian refugee living in the province of Sanliurfa in southeastern Turkey, told Al-Monitor, “I have not been able to complete my university studies in speech therapy in Syria because of the war. Since many refugee children here [in Turkey] have speech problems, I reached out to Hayek via Facebook to ask him for advice and he agreed to help. I would hold treatment sessions for Syrian children at my house and send him messages explaining the difficulties I faced. With his help, I was able to treat several children.”

She noted, “Many Syrian children suffer from stutters likely brought on by trauma in light of the war, bombings and displacement. Other causes contribute to this kind of disorder, as is the case of Sumaya, 12, who fell when she was young." The doctor who treated Sumaya told Abdul Jawad that when the child hit her head, the left part of the brain that is responsible for speech was damaged.

"I treated her for five months and she finally recovered.”

Abdul Jawad, who is taking online courses in speech therapy, said she had a hard time communicating with Hayek. “I would send him a message in the morning and he would reply late at night because he had so much work to do and no electricity.”

Today, Hayek and Abdul Jawad plan to establish a joint project targeting 20 Syrian children with speech problems, but power cuts in Gaza are impeding their efforts. Both of them stressed that trauma and mental illness are among the leading causes of speech problems, particularly among children, so refugees are in special need of care.

Hayek seeks to create a team of speech therapists from several Arab countries. Each member can work in his or her country to treat as many displaced children of various nationalities as possible. In a March 2017 report, UNICEF stated that 2.8 million Syrian children live in hard-to-reach areas, including 280,000 children under siege and in near total obstruction of humanitarian aid.