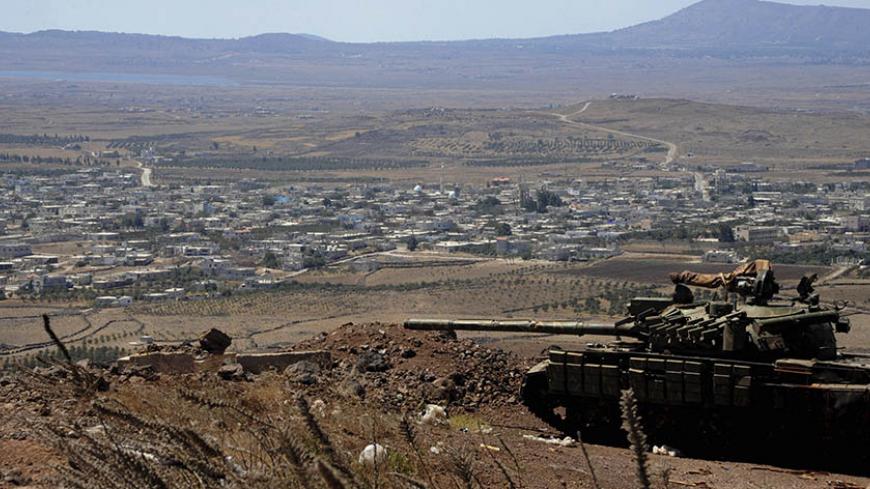 A tank belonging to the forces loyal to Syria's President Bashar al-Assad is seen in Quneitra's countryside during a battle with Syrian rebels, near the border fence with the Israeli-occupied Golan Heights, Sept. 8, 2014. - REUTERS

Not a soul could help but be outraged by the two recent atrocities that the Islamic State (IS) has unleashed upon the world. The first of these was the immolation of Jordanian fighter pilot Muath al-Kasasbeh on Feb. 3, followed a short time later by the ceremonial execution of 21 Egyptian captives in Libya. This last horror show not only gave IS bonus points for wreaking fear among the general public, but also embedded images in the international community's awareness of a new arena taken over by the group. So far we have seen Syria, Iraq and the Sinai Peninsula, and now there is also Libya. Traces of IS can be found in each of these places, and if not IS per se, then at least its corrupt legacy.

While this terrorism is essentially homegrown, the West cannot be absolved of its contribution to encouraging it. In three out of the four current hotspots, at least one Western country was involved in laying the groundwork for it. The Americans ousted Saddam Hussein in Iraq; France instigated the military operation against Moammar Gadhafi of Libya; and the rebels who aspire to topple the Syrian regime have long enjoyed the steady support of France, Great Britain and the United States.

Thus, this Sunni terrorism benefits from a gradual yet constant process of weakening the regimes of the Middle East, or prompting their collapse — a process to which the West has generously contributed. In such a reality, Jerusalem should calculate its every move with the most extreme caution. In December 2014, the United Nations Disengagement Observer Force, which maintains peace in the Golan Heights, released an intriguing report on contacts between the Israel Defense Forces (IDF) and the Syrian rebels. The report disclosed, if only in part, that the two parties have held dozens of meetings, and that Israel transferred certain unidentified objects to anonymous individuals across the border fence. Furthermore, rebels on the Syrian side of the Golan Heights know that if they are injured in battle, they can receive medical care in Israel. According to official IDF sources, some 1,500 wounded individuals arrived at the border fence over the past two years and then received treatment in Israel. These included innocent women and children, but there were also many men who were injured in battle, or in other words, fighters. Not one of these was a soldier in the Syrian army. And their arrival is coordinated in advance, meaning that someone is informing the Israelis that they are on the way.

What this shows is that after four years of fighting in Syria, Israel apparently is no longer sitting on the fence. These facts indicate that Israel is ostensibly taking a side in the crisis, and between the two sides, it chose to support the Sunni rebels. But who are these rebels, and what do they want? It is hard to tell, because, unfortunately, there is no public discourse in Israel about these contacts, nor is there any discussion about our new partners across the fence.

Anyone who delves into the situation in Syria, if only just a little, will find a confusing jumble of armed factions, including the Free Syrian Army, but also some other more extreme factions that have adopted extremist ideology. First and foremost among these are Ahrar al-Sham and Jabhat al-Nusra (the Syrian branch of al-Qaeda). The latter is a deadly group, which has been declared a terrorist organization by the United States and the United Nations.

While Israeli intelligence sources are likely to attribute the secrecy surrounding their support for these groups to security needs, it is actually a political issue. It should be utterly inconceivable that Israel’s security forces would maintain contact with such fickle militias, not subject to any laws, or that if they did, the Israeli public would know nothing about it. Imagine if the Shin Bet established clandestine relations with Hamas as politicians promoted a monstrous image of the group to the broader public.

Here are a few questions that should be of some interest to Israelis: Why did Israel decide to wade into the sullied waters of the Syrian crisis after a lengthy period of neutrality? What was the basis of the alleged decision to side specifically with the Sunni rebels? Why did Israel prefer to establish contact with a non-state actor, rather than with the capital of a sovereign state? Are Israeli intelligence elements in contact with extremist groups?

The cruelty of Damascus is undisputed. The Syrian regime subjected its people to tyranny for decades. When the battles erupted, the regime massacred mercilessly its citizens, even within densely populated residential neighborhoods.

But as far as Israel is concerned, experience teaches that the Shiite-Alawite camp is led by pragmatic individuals. While they may be motivated by the urge to attack Israel and shed its blood, this is not the result of some bloodthirstiness or messianic religious fervor, as it is with the various Sunni extremist factions. Yes, Damascus is Jerusalem’s traditional enemy, but it also knew how to keep the border quiet for four decades. Even in the numerous instances when Bashar al-Assad was allegedly attacked by the IDF (some of these instances according to foreign news sources), Assad was reluctant to respond, so as not to open up a front with Israel. With the Middle East experiencing a rising tide of fundamentalism, it is better to face a secular rather than a religious enemy.

We should stop with the illusions: the day "after Assad" won't bring about a secular liberal ruling alternative. The extremist organizations are the most dominant factions in Syria nowadays. Any void left in Syria will be seized by them, not the moderate rebels. This is what happened in Iraq and Libya. This is what will happen in any other arena in the region.

Israel has a bitter score to settle with Hezbollah, too, but at least it is a disciplined movement whose word counts for something, and which has a single loyalty. It is a group that can be spoken to (through mediators, of course). Its policies include avoiding attacks on enemy civilians, except in extreme circumstances, or when there is a need to reciprocate in kind. Its fighters do not behead anyone, nor do they set their prisoners on fire. When it wants to attack Syria or Hezbollah, Israel has an address to turn to. The same cannot be said about the Sunni extremist organizations. With them, it’s hard to tell who's pulling the strings from a distance today, and who will be pulling the strings tomorrow. A retaliatory operation against them can sometimes resemble chasing after the ghosts of yesterday. With that in mind, Israel must know the true identity of the horse it is betting on.

In the mid-1980s, the IDF’s Civil Administration in the Gaza Strip promoted Islamic organizations as counterweights to Fatah. What ultimately emerged out of those groups was Hamas, a group that has since devoured Fatah and now constitutes a tangible threat to Israel.

The most horrifying scenario in the Golan Heights would be this: Once the last Syrian troops are driven out of the narrow strip of territory they still control along the Israeli border, the Sunni factions will establish themselves in the region. At that point, some patron will recognize the potential damage that the group can cause Israel and take it under its wing, both financially and ideologically. It will not be long until a hail of mortar fire threatens the Israeli communities of the Golan Heights, God forbid.