After Israel was forced to rescue UN forces in the Golan Heights, the UN warned of instability in the Syrian Golan and the danger posed by Syrian rebels affiliated with al-Qaeda, reports Inna Lazareva. 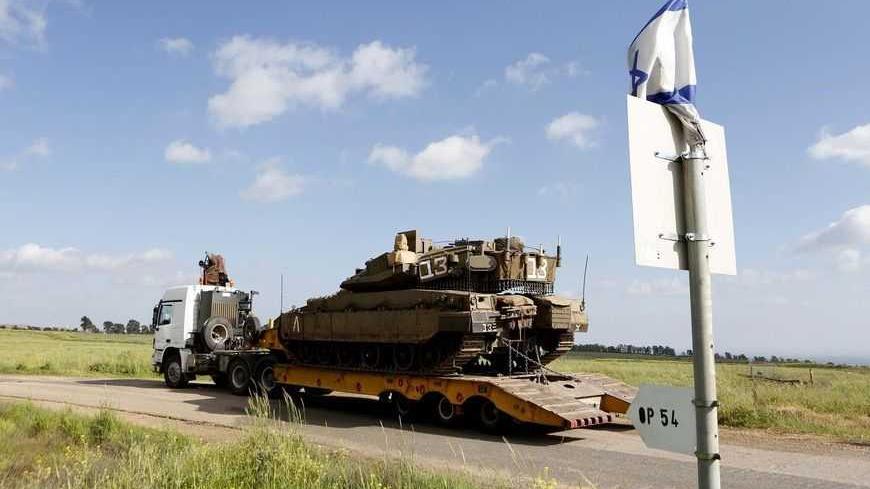 An Israeli tank is transported on a truck to the Israeli-Syrian border in the Israeli-occupied Golan Heights, March 24, 2013. - REUTERS/Baz Ratner

On March 8, while 21 UN observers were being held captive by Syrian rebels, another group of observers was running for their lives. Caught up in fighting between the Syrian army and rebels, they fled down a steep mountain. There, they were helped by Israeli Defense Forces soldiers who entered the Syrian Golan Heights to rescue them. The incident marked the most significant instance of Israeli soldiers crossing into the Syrian Golan Heights since 1974.

Camp Faouar, part of a United Nations Disengagement Observer Force (UNDOF) Zone, can be seen on a distant hill in Syria from a vantage point close to an IDF base. The UN camp is in a buffer zone just dozens of meters from the Israeli border.

IDF Brig. Gen. Gal Hirsch, together with Ministry of Defense patrol officials, pointed to that area of the UN camp and spoke of a "battle on this post between the Free Syrian Army and the Syrian army” several weeks ago. Syrian rebels had captured the Syrian army’s military post located on top of a mountain “for a few hours” before the Syrian army went to reclaim it. A bloody battle followed.

“There were UN troops very close to this battle who had to leave their posts," Hirsch said. They escaped by “going down the cliff and climbing by foot to the Israeli border.”

He said, “They were in a very bad situation,” and that IDF soldiers had to cross into the buffer zone to rescue the UN soldiers in the Syrian Golan Heights.

The UNDOF was established in 1974, in the wake of the 1973 Yom Kippur war, as part of a cease-fire agreement between Syria and Israel. Until recently, six countries — Japan, Croatia, Canada, the Philippines, India and Austria — had contributed peacekeepers. Today, just three participating states — the Philippines, India and Austria — remain due to growing risks in the area. In the most recent report on UNDOF’s work, UN Secretary-General Ban Ki Moon noted the many incidents that have posed significant risks to UN personnel there, including live shots fired at UN peacekeepers, carjacking of UN vehicles and the recent kidnapping of 21 UNDOF military personnel.

Yet the danger is not limited to the UN forces deployed there. The report also warns that the instability in the Syrian Golan, particularly the buffer zone with Israel, could “jeopardize the cease-fire between the two countries and the stability of the region.” Israeli forces have on occasion returned fire into Syria in response to shells fired into Israeli territory. Most recently, on March 24, Israel fired a missile at a Syrian army post in the Golan Heights, after its forces twice came under fire.

“Today, half of the Syrian Golan Heights is captured by the rebels, and not held by the Syrian army anymore,” said Hirsch, emphasizing Israel’s extreme concern about the situation on its northern border. Calling the area “ungoverned,” he described it as controlled “by many fundamentalists who are just running to this area in order to capture bases and build their infrastructure to use it later against Israel.” Israel is now building a high-tech fence system on its border with Syria to stop infiltrators. Yet everyone agrees that this is not the answer to all of the potential dangers.

“The main problem in Syria,” Hirsch said, “is its huge, huge store of weapons.” Syria has become “one of the biggest warehouses for weapons in the world, including weapons of mass destruction.” He added, “That’s a huge threat for us because we don’t know who will capture the WMDs and the advanced weapons that Russia supplied over the years to Syria, and who will be able to use them against Israel or, via the terror organizations already here, on the rest of the world in terror activities.”

Israel and other countries are concerned about the intentions of the Syrian rebels, some of who are affiliated with al-Qaeda. One group in particular, Jabat Al Nusra — a Syrian jihadist group following hardline Salafist ideology working throughout Syria — is operating increasingly closer to the Israeli border. Their attack in late January 2013 on a Syrian military intelligence unit was just 15 kilometers (nine miles) from the Israeli-Syrian border.

From the Israeli-Syrian border looking down into the valley in Syria, one can see Jabat al-Nusra-occupied villages in the distance. Powerful binoculars show deserted streets and half-built or dilapidated houses, vacant for years, which now serve as seats of operations for the Syrian rebels. Jabat al-Nusra is said to number between 5,000 and 8,000, and include many foreigners. Facebook and YouTube pages that document the names and origins of dead Jabat al-Nusra fighters show that the top three countries being recruited from are Saudi Arabia, Tunisia and Libya, particularly from the Benghazi area.

Israeli government sources said that despite al-Nusra having set up just 14 months ago, it has carried out more attacks and inflicted more damage on the Syrian regime than any other opposition organization.

Itamar Rabinovitch, a professor of Middle East history at Tel Aviv University and Israel’s former ambassador to the US, said the activities of Jabat al-Nusra are “potentially very serious, in two ways. One is that when Assad falls — and I think it’s a question of ‘when,’ not a question of ‘if,’ the central government might be replaced by an Islamist or perhaps even a jihad-oriented, radical Islamist movement. The second is that there may be a terrorist or a jihadi takeover over parts of the country, and the country could at least for a while become fragmented, with the Alawites and the Kurds having autonomy and jihadi elements … possibly even gaining control of some of the weapons of mass destruction. Some of these areas may be close to the cease-fire line with Israel, and in that case, Israel will have to deal with it.”

Yet al-Qaeda-affiliated organizations are not the only threat to Israel in Syria. “Hezbollah, as a front guard of Iran, acts here, trying their best to preserve and restore Assad’s rule here,” Hirsch said. They are preparing this area as a launching site for terrorism from “here, and not from Lebanon.”

He added, “They are strongly deterred after 2006 [Israeli-Hezbollah war] in Lebanon. No one wants to see the repeat of 2006, when the population suffered a lot and Hezbollah suffered many, many casualties and damage. So they would strongly prefer to operate from the shattered Syria, the new Syria.”

One Israeli university academic, an expert on Islamist movements who prefers to remain anonymous, said that Jabat al-Nusra has two aims. In the short term, “they want to make war against Assad.”

They went on, “But there’s no doubt that after they succeed in ousting Assad, they will open another front against ‘the crusaders.’ …After they succeed in the first stage, they will continue onto the ‘main’ stage: the quest for the 'Bilad el Sham' — a name in Islam for the district of Syria, Jordan, Israel and Lebanon. The historical Syria, the greater Syria. There are traditions from Prophet Muhammad about the importance of this specific district in the Day of Judgement, and this is a very important foundation to the motivation of al-Qaeda for using the situation in Syria to make war against Israel.”

Inna Lazareva is a British journalist and political analyst on the Middle East, based in Tel Aviv. You can read more of her writing on www.innalazareva.com.