Syria's inability to control its border with Israel has introduced uncertainty and increased chances for the regionalization of Syria's civil war, writes Geoffrey Aronson. 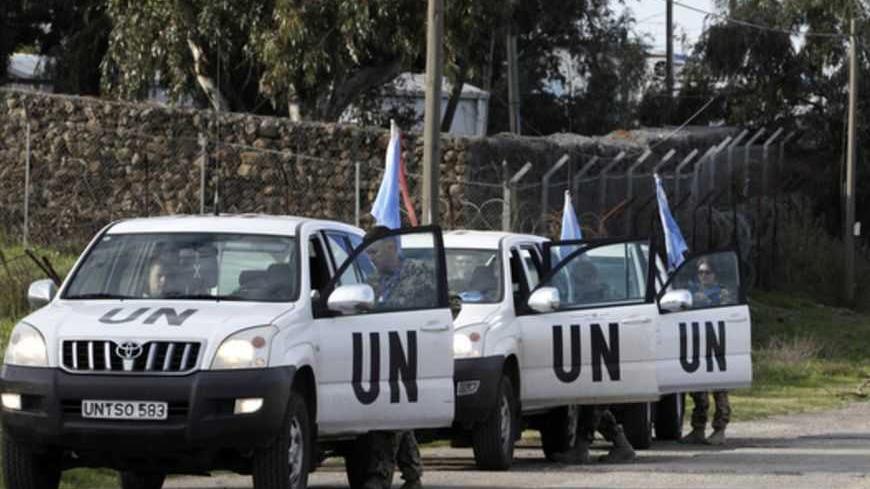 United Nations peacekeepers put on protective gear before driving through the Kuneitra border crossing between Israel and Syria, in the Israeli-occupied Golan Heights, March 8, 2013. - REUTERS/Baz Ratner

The destruction of Syria continues apace. The regime has lost the ability to monopolize the use of force within the state and its control of Syria's land borders is no longer uncontested. This loss of control is perhaps most ominously the case on the cease-fire line separating Israeli and Syrian forces — those belonging to the regime and the multifaceted opposition alike — on the Golan frontier.

Unlike Syria's borders with Turkey, Lebanon, Iraq and Jordan, there is no agreed-upon border between Israel and Syria, whose military forces are instead deployed along a cease-fire line established in the wake of the October 1973 war that ended with Israeli forces occupying sovereign Syrian territory in the Golan Heights. The United Nations disengagement and observer force (UNDOF) was established in June 1974 to observe the cease-fire and supervise the disengagement agreement.

For almost four decades, service with the UNDOF along the frontier was a vacation. The 1,250-man force oversaw the creation and maintenance of an area of separation along the 75 km frontier, ranging in width from 10 km along the flat plateau to only 200 meters in the south. It established two base camps, 20 permanently manned positions, eight outposts manned during the day and 11 observation posts. The Austrian battalion includes a Croatian company deployed in the northern sector. A battalion from the Philippines is deployed in the south. Forces from India and Japan provide logistics support. The zone is inhabited by Syrian civilians and is meant to be governed and policed by Damascus. No Syrian or Israeli military forces are permitted in the zone. While proxies on occasion battled elsewhere, and Syria and Israel themselves came to blows, both Israel and Syria agreed on the need and the value of keeping the Golan quiet.

Israel, whose forces are only 60 km from Damascus, remains committed to maintaining the peace along the border, but the regime of Syrian President Bashar al-Assad is no longer capable of holding up its part of the bargain. The first signs of Assad's loss of control followed the pattern established throughout the country. Initially there were exchanges of fire between the rebel forces and the Syrian army close to the border. Then, some of the shots or shells crossed over the border into Israel, which responded in kind. Some insurgents escaped to Israeli territory or crossed into the Israeli-occupied Golan to receive medical treatment. Israel's Channel 10 has reported that al-Qaeda operatives, including members of the Al Furqan battalion, also active in Idlib, have been watching and studying IDF operations along the border, sometimes from a vantage only meters from IDF patrols.

Eyal Zisser, an Israeli expert on Syria with close ties to Israel's security system noted, “The Syrian regime was known for its hostility toward Israel, and yet [...] it took great pains to ensure that the border along the Golan remained quiet. Now, instead of the regime of Bashar Assad, there is a vacuum there, which is encouraging chaos.”

The abduction and subsequent release of 21 United Nations peacekeepers by local opposition forces near the village of Jamla therefore represents a serious escalation of an already problematic situation.

Like the Multinational Force of Observers (MFO) established by the US, Egypt and Israel in 1982 to observe the peace in Sinai, UNDOF forces will now be more concerned with their deteriorating security than in performing their mission, which in any case has changed beyond recognition. The UNDOF was created to oversee a cease-fire between two functioning countries and to give an international stamp of approval to the mechanisms each established as a transition from war to peace. Each of these rationales is now in grave doubt. Assad has lost control to rebels of parts of the area facing Israeli forces. Some of the rebels have a jihadi agenda not only against the regime in Damascus but also against Israel. UNDOF, like the MFO in Sinai, is simply not built to address these new realities.

Small contingents from Japan and Canada have already been quietly withdrawn in recent months because of security concerns. Croatia has announced that it is withdrawing its hundred-soldier contingent, saying it fears for their safety after it was reported that Croatian arms sold to Saudi Arabia were transferred to opposition forces. Israel has made a formal request that the UNDOF remain in place with its agreed complement of forces, but the government is said to be pessimistic about the organization's prospects in view of the anarchy that is consuming the entire country.

The UNDOF's demise, or its retreat, would remove the international buffer that has separated considerable deployments of Israeli and Syrian military forces now supplemented by Syrian and jihadi irregulars.

More broadly, the UNDOF's problems are clear signs of a breakdown in the system that supervised the cold peace between Israel and Syria in the post-1973 war era. A similar dynamic is also well underway in Sinai. As in Sinai, new structures and systems may evolve to maintain the quiet along the border. In Sinai, for example, Egypt is deploying, with Israel's consent, armed forces beyond those specified in the peace treaty. Israel is unilaterally constructing a “hard” border to better defend against cross-border attacks by irregulars and redeploying forces to the south in recognition that the southern front is now “active.”

Yet the challenges of a breakdown in the system governing the consensus between Israel and Syria are greater, because of the absence of a peace agreement between the parties (and their successors) and because of the inability of the Syrian regime to command and control forces along the border region.

In this respect, the situation today with the UNDOF on the Golan may more closely resemble the position of UN forces in Sinai after then-Egyptian president Jamal Abdul Nasser ordered their removal on the eve of the June 1967 war. In both cases, changing circumstances undermined the forces' ability to perform the mission. In the case of the United Nations Emergency Force, as the system of relations between Israel and Egypt that had maintained a cease-fire since 1956 broke down, the forces were withdrawn from Egyptian territory and the result was war.

The crisis today confronting UN forces on the Golan is an international concern. The UNDOF's impairment signals at the very least an inability of the international community, along with the parties themselves, to maintain a system that had the confidence and consent of both parties and that proved since its establishment to be resilient in the face of many difficult challenges. In its place stand armed forces on heightened readiness on either side of what has become a fragile cease-fire line — one that will perhaps not be recognized by one party or the other. A war between Syria and Israel is not the default option in the wake of the UNDOF's possible demise, but when existing systems break down, the prospect of armed conflict increases.