The UN secretary-general warned today that the cease-fire between Israel and Syria is in jeopardy as Austrian forces have withdrawn from the UN Disengagement Observer Force. 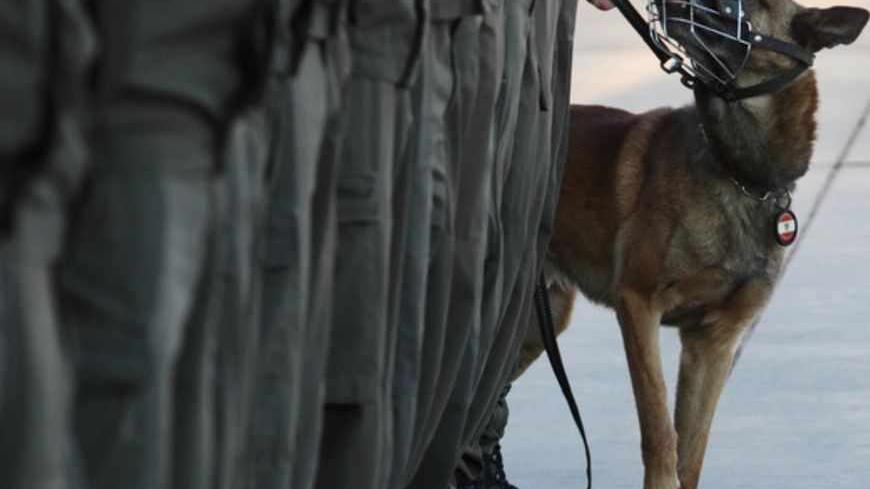 Austrian United Nations peacekeeping soldiers and a dog stand at attention after they arrived at the Vienna International airport in Schwechat June 12, 2013. - REUTERS/Heinz-Peter Bader

Austria's precipitous withdrawal of forces from the UN-mandated force monitoring the disengagement of the Israeli and Syrian armies in the Golan Heights is yet another alarming signal of the breakdown of the rules of the game that have governed not only relations between Israel and Syria for more than four decades, but also those between the two superpowers of Russia and the United States.

These rules, formulated in the aftermath of the last superpower confrontation in the region during the October 1973 war, established international support for the framework that has preserved a de facto peace between Israeli and Syrian armies on the Golan front and more broadly, set the terms of superpower competition in the region that has continued even after the end of the communist regime in the last century.

This pattern of relations and understandings is now being tested as never before. UN Secretary-General Ban Ki-moon, in a report released today, June 13, warned that “The ongoing military activities in the [Golan] area of separation continue to have the potential to escalate tensions between Israel and the Syrian Arab Republic and to jeopardize the cease-fire between the two countries.”

The ability of the regime in Damascus to enforce its writ along the disengagement line with Israel is being challenged by opposition attacks on government and the United Nations Disengagement Observer Force (UNDOF). In its efforts to re-establish its authority along the border, the government of Syrian President Bashar al-Assad has deployed forces and armaments, including tanks, in violation of the terms of its 1974 disengagement agreement with Israel. Localized, small-scale exchanges of fire between Syrian and Israeli forces have been recorded, violating the terms of their agreement and raising tensions already exacerbated by Israeli attacks on other fronts. UN peacekeeping chief Herve Ladsous told the UN Security Council last Friday that Israel formally notified the UN that it would attack Syrian forces that had deployed in the disengagement zone in order to wrest control of a border position in Quneitra from rebel forces. Damascus, for its part, has threatened to open a “Golan front” against Israel.

The breakdown on the Syrian side of the line has transformed the environment in which UN forces have operated since 1974. What was once a non-contentious and safe monitoring operation of an absolutely peaceful border region has been transformed beyond all recognition. UNDOF forces are hunkered down. Its troops have been kidnapped and injured by rebels. Active monitoring operations and patrols on the Syrian side of the "Bravo" line have been suspended.

Austria's decision to withdraw its contingent in the face of increasing threats posed by confrontations between Syrian forces is both an operational and a political blow. Austria’s 377 observers constitute almost half of UNDOF's 911-person complement, including the deputy force commander who arrived only in April, and Vienna has ignored pleas from the UN to delay its departure until replacements can be found. Almost 100 were repatriated within days of the decision. Diplomatically, Austria’s departure, preceded by 97 troops from Croatia in March, undermines the broad international consensus and UN-mandated support that has made UNDOF a cornerstone of stability along the border and more broadly, a symbol of American and Russian consensus.

This latter feature of the system is now being challenged by Russia, which has offered to replace the departing Austrian forces. The Russian play was made by no less than President Vladimir Putin himself, a clear demonstration of the calculated nature of the proposal.

"Given the complicated situation in the Gland Heights, we could replace the leaving Austrian contingent in this region on the border between Israeli troops and the Syrian army," Putin said at a televised meeting with Russian military officers.

To highlight that this was not simply a one-off remark, Putin's suggestion was followed up by Russia's UN representative Vitaly Churkin, who said UNDOF "seems to be in dire straits," and added, "We are offering, essentially, to rescue UNDOF.”

The head of the Russian parliament's International Relations Committee, Alex Pushkin, suggested that if Russia were to be handed over the security of the Golan Heights, Syria's security would also be safeguarded by Russia.

As Putin undoubtedly knew before he made the suggestion, Russian participation in UNDOF was excluded together with that of all other permanent members of the security council by the terms of the original agreement that established the force.

"Obviously, we are aware of that document,” Churkin explained, “but we believe that times have changed. The document was signed 39 years ago at the height of the cold war, and the whole context of the war of 1973. Now, the context is completely different."

Churkin said that Syria and Israel would have to approve a Russian deployment. He added that UN legal experts would also examine whether the council might have to adopt a resolution if the Russian offer moves forward.

The Russian proposal is dramatic for a number of reasons. It offers further evidence of the passing of the old order of Russian-American cooperation in the Syria-Israel arena and of Russian efforts to establish new and favorable rules of the game to govern the era that is still unfolding. Geneva II marks a transition that includes elements of both the former superpower collaboration and the more contemporary advantage Russia seeks to enshrine. Putin's offer also signals an expansion of the already active Russian campaign to invest in the Assad regime. It marks an aggressive, unilateral Russian interest via à vis Washington to mark out for itself a critical and controversial role not only in Syria but also as an arbiter of relations between Israel and Syria, on the Golan front but also far more broadly.

Deploying Russian forces in a volatile area of the Middle East characterized by a history of superpower confrontation, including in the nuclear dimension, has always been and will remain a non-starter. Washington was caught flat-footed by the suggestion but is sure to reject it at the UN, as will Israel, which has always opposed in principal deployment of US or Russian forces along its borders. Moscow well understood that the price of such a rejection was worth paying to illustrate Russia's unprecedented interest and engagement in shaping the terms of the new game.

UNDOF, for all of its troubles, is an important symbol of international support for the cease-fire between Israel and Syria and a much-needed and trusted intermediary with a record of mediating conflict between trigger-ready forces on the Golan frontier. As they have for decades, both Israel and Syria have signaled their interest in extending the deployment for another six months when the issue comes before the Security Council later this month. It would be foolhardy to do otherwise.