Israel shifts its strategic posture, recognizing that Syrian President Bashar al-Assad is staying on and that a jihadist alternative would be even worse. 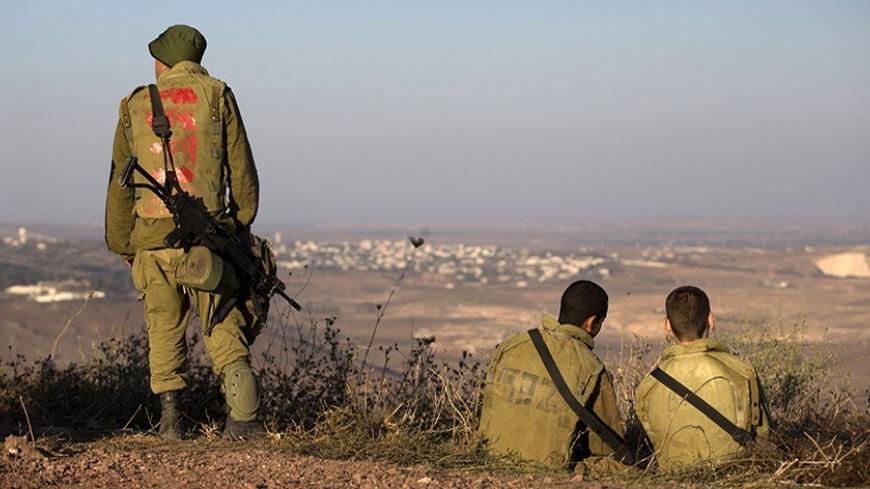 Israeli soldiers look across the border to Syria in the Israeli-occupied Golan Heights, Aug. 30, 2013. - REUTERS/Ronen Zvulun

Over the next few weeks, a historic event, which will go unreported and not elicit much public reaction, will take place in Israel. The command of the 36th Ga’ash Division of the Israel Defense Forces (IDF) will disband and relocate from the Golan Heights to a new home-front base. Established in 1954 — six years after Israel’s foundation — it is one of the IDF’s first armored divisions, and has been deployed on the Golan Heights since 1971. This is an elite, highly trained regular division that for the last 43 years has been tasked with overseeing only one sector — the Syrian one. Living and breathing the Golan Heights, this division trains there and knows the area inside out. All the division’s combat arrays, doctrines and training were based on war with Syria. The Syrian enemy, to wit, the Assad dynasty, has been the 36th Division’s raison d’être. In Israel, when you call it by its name, you're in fact saying the Golan Heights, you’re in fact saying Syria. They’re synonymous.

Yet lo and behold, not before long this historic IDF division will relocate to a home-front base and its troops will move to the rear. It will be replaced by a regional brigade whose mission is to engage in what is known as low-intensity security operations. Not trained to engage in heavy battles between regular armies, it will be similar to the units guarding Israel’s border with Jordan and much of its border with Egypt. These are troops who are trained to carry out border patrols, identify incursions, deal with low-intensity security issues and react forcefully if attacked. It’s a whole different ball game.

Three years after the outbreak of the civil war in Syria, the penny has finally dropped in Israel — slowly, albeit not necessarily painfully. The strategic situation has radically changed. Syria no longer poses an existential threat to the Zionist state. There are no more trained and equipped Syrian armored divisions deployed just two or three hours away from the border. That Syria is long gone. Realizing that, Israel adapts.

While the number of tanks in the IDF has dramatically plummeted in the past decade, the quality of each tank has risen significantly. The number of artillery batteries has diminished, too. What we see in their stead are a growing number of light and trained units, chiefly dedicated anti-terrorist infantry brigades, which are heliborne or use fast vehicles for greater maneuverability. Operating under low signature, they’re trained to be agile and deadly. Welcome to the new Middle East. There remain few Arab countries that still scheme to destroy the State of Israel. However, there are an abundance of state-like terrorist organizations with trained jihadists — armed with tens of thousands of rockets and missiles and using tunnels and bunkers — ready to kill Israelis and to be killed. This week, on Jan. 20, one of them fired rockets from the Sinai Peninsula at the southern city of Eilat.

All of this is taking place while the dynasty of Syrian President Bashar al-Assad remains alive and kicking. When the rebellion in Syria broke out, Israeli officials estimated that Assad’s days were numbered. Then Defense Minister Ehud Barak gave him just a “few more weeks.” Barak is no longer relevant. Assad still is. Barak currently provides strategic consulting services on Israeli and Middle Eastern affairs. For the sake of his customers, one should hope that he gives them better counsel. Assad is still here. And not only is he still here, but it seems to me that he is here to stay. Only a handful thought that this would be possible (one of them is professor Eyal Zisser, an expert on Syrian affairs from Tel Aviv University, who estimated right from the start that the war would go on for years and refused to place a wager on a winner). Assad pulled out of his nosedive and managed to make a rare and quite astounding turnaround.

The Wall Street Journal reported on Jan. 14 that Western intelligence officials visited Damascus to hold coordination talks with their Syrian counterparts. The reason for this was Western attempts to monitor a large number of terrorists and jihadists from Europe and elsewhere who ended up in Syria to take part in the global jihad’s concerted effort to eradicate the Assad dynasty and take over the country.

It seems to me that the penny dropped not only in Israel but also in the West. This is an astonishing process. If it continues at the current pace, Assad might still rehabilitate the most important thing to secure his regime — more important than military power and economic aid — his legitimacy. By conceding his chemical weapons, Assad made the “move of his life,” well-versed Israeli defense experts are saying. He sacrificed a rook but guarded the queen and bolstered the king.

On Jan. 20, CNN carried a report on acts of torture and massacre perpetrated by Assad's regime against his own people. It remains unclear whether these new revelations could alter the global trend and cause Assad a setback. One thing is for certain, however. Had we tried to imagine Assad’s current situation barely a year ago, we would not have thought it possible. Yet, that’s the reality. The West has come to the realization that the alternative to Assad’s murderous regime would mean turning Syria into a huge stronghold of jihad and al-Qaeda terrorism. This can be likened to choosing between the devil and the deep blue sea. In such situations, people prefer to stick to what they already know, however bad it may be.

“The talks between Western intelligence officials and Assad’s people were not held between high-ranking echelons,” a senior Israeli defense official told me this week. “It was not intelligence chiefs who came to Damascus; rather, it was the professional echelons that met with their counterparts.”

I asked him what this meant. “What it means is that the Europeans and Americans have not yet completely come to terms with reality, but at least they are able to recognize it. The West has come to the realization that the alternative to Assad is worse. The romantic fairytale of overthrowing the cruel despot and saving the people has gone up in smoke. The growing strength of jihadist and al-Qaeda militants in the Syrian rebellion has become a double-edged sword,” the Israeli official opined. “On the one hand, it does save the rebels on the ground, especially in light of Hezbollah backup and Iranian aid. On the other hand, this has exposed the true face of the Syrian opposition vis-a-vis the world. In this lineup — between the faces of the opposition and the mugs of the Syrian regime — the world is unsure that it prefers the opposition.”

A senior Israeli diplomatic official analyzes the situation as follows: “Until a year ago, Israel preferred to openly talk about severing the 'axis of evil' as a strategic interest of the first order. If Syria is out of the running, this will have an adverse impact on the Tehran-Damascus-Beirut axis, considerably weakening Hezbollah, isolating Iran, doing away with Israel’s most difficult strategic problem on the northern border, and in general.”

“Well,” he adds, “this is no longer relevant. Iran started implementing the Geneva agreement yesterday. It seems to me that the Iranian story will be resolved. Iran will remain a threshold state. The West will have reasonable invasive supervision. All the parties will hunker down behind this point and wait patiently. Iran will wait for an opportunity, whereas the West will wait for the ayatollahs’ downfall. So the Syrian affair makes no difference in connection with Iran. Hezbollah has also grown much weaker,” he further observes. “It has a serious problem in Lebanon. Having sustained heavy losses in Syria, it is isolated and is not in a state of actively seeking a confrontation with Israel. In light of this, the axis of evil is less dominant and important than it used to be. And precisely because of this reality, keeping a weakened and smaller Assad who controls some parts of Syria and is not harmful to his surroundings is slowly becoming an Israeli strategic interest.”

It’s not just Israel that has begun to understand this — it’s the whole world. When the 1980-1988 Iran-Iraq war broke out, then-Prime Minister Menachem Begin wished both sides success. Although Israel has not said this openly, there are a growing number of officials who prefer Assad over jihad and al-Qaeda brigades by the Golan Heights' border fence. In the past two years, Israel quickly set up a cutting-edge separation fence in the Golan Heights, similar to the ones it built in the West Bank and along the Sinai border. Israel is quickly turning into the most fenced-up country in the world. Luckily for us, we have the Mediterranean on the west. Presently, only the border with Jordan is not heavily fenced. That, too, will change soon enough.

Israeli Prime Minister Benjamin Netanyahu rushed last week, on Jan. 16, to hold a meeting with King Abdullah of Jordan. Among other things, they discussed the fence. Netanyahu tried to persuade the king to make public his opposition to an IDF withdrawal from the Jordan Valley. The Hashemite dynasty is far more scared of the Palestinians than it is of Israel. If you were to ask the Jordanians — in a closed room and off the record — they would admit that they prefer to have the IDF serve as a buffer between the Palestinian core in Jenin and Ramallah and the Hashemite kingdom, which also has a clear Palestinian majority. The IDF deployed along the Jordan River is an insurance policy for Abdullah’s regime just as much as it is important for Israel’s security. The problem is that the Jordanians cannot say this out loud. After all, one Abdullah – Abdullah I bin al-Hussein — was already assassinated in July 1951 by Palestinians while coming to pray at the Al-Aqsa Mosque in Jerusalem. The Palestinians suspected that he was cooperating with Zionism and that he did not genuinely employ his army in the 1948 war. From Abdullah the grandfather through Abdullah the grandson, from Hafez al-Assad to Bashar al-Assad, there are a few more stable things in the Middle East than we previously thought. 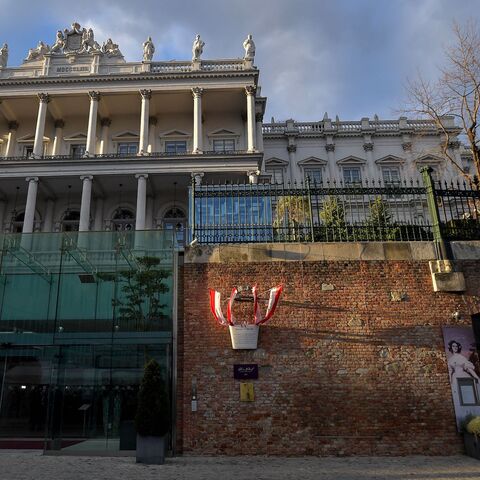