The Israeli government prefers that Syrian President Bashar al-Assad's forces keep the Golan quiet, while making clear it will not tolerate any game-changing weapons transfers to Hezbollah. 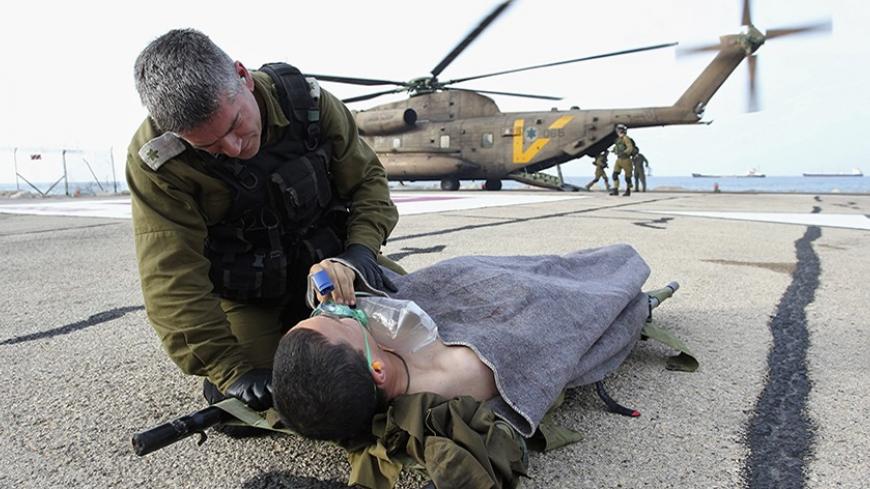 An Israeli army officer speaks to a soldier who was wounded during an explosion in the Goldan Heights as he is evacuated to a hospital, in the northern city of Haifa, March 18, 2014. - REUTERS/Gil Nechushtan

On Thursday, March 13, Israeli Prime Minister Benjamin Netanyahu convened a special meeting of the diplomatic-security cabinet at the headquarters of the Defense ministry — the nerve center of the Israel Defense Forces (IDF) and its intelligence services in Tel Aviv.

Such cabinet meetings in Israel often take place under a pall of secrecy and usually go unreported. This time, however, an official statement about the meeting was released. The purpose was to ratchet up pressure on Gaza-based Islamic Jihad leaders, who, just a day earlier, had fired a salvo of dozens of rockets at Israeli towns near the Gaza Strip and in the Negev region, thus embarking on another round of violence against the IDF and the Israeli Air Force (IAF).

Israel’s cabinet meetings automatically heighten the alert in the region, given that they are expected to authorize large-scale IDF operations and mobilization of reserves, etc.

Some 30 to 40 people huddled inside the cabinet’s conference room. Netanyahu, flanked by cabinet ministers and their assistants, chaired the meeting. Sitting around the table were the heads of Israel’s security agencies as well as other high-ranking officers, among them Deputy Chief of Staff Maj. Gen. Gadi Eizenkot (Chief of Staff Benny Gantz was on a working visit abroad). Others included Mossad director Tamir Pardo, Shin Bet director Yoram Cohen as well as senior officers from military intelligence, the operations directorate, other security agencies and, of course, representatives from the air force and the Southern Command.

The atmosphere was tense. The meeting took place on the day of the Jewish holiday of Purim, when Jews don all sorts of costumes, oftentimes showing up at the workplace all dressed up (Purim is not an official paid holiday in Israel). It commemorates the victory of the Jews over the evil Haman during the time of the Persian Empire and the victory procession that was staged in its wake in the ancient capital Shushan.

Delivering his assessment, the Mossad director expressed a concern by which Hezbollah might try exploiting the skirmish in the south to ignite a small sector on Israel’s northern border. He estimated that the organization might use proxies so as not to get into a frontal confrontation with Israel, given that it is mired in Syria up to its neck. As noted, the meeting was tense. Nobody wanted to see Purim turned into a holiday of shelter-sitting for the million residents in the south of Israel. At some point during the presentation of the Mossad director, the door of the meeting room opened and in walked a female clown.

The room broke into silence as the participants looked intently at the clown walking into the room. Only Netanyahu, who was poring over his papers at that moment, failed to notice her. At the last second, Bibi (Netanyahu) picked up his head and saw the clown as she stood right in front of him, putting down the espresso he had ordered just minutes earlier. For a moment there, he seemed to panic. Seeing clowns is not what you would normally expect to see in such meeting rooms.

Then the participants burst into roaring laughter. That was a bizarre, not to say grotesque, situation that could only happen here. It was simply a Ministry of Defense employee who had shown up for work in a clown’s garb that day, with the red nose, the pointy hat and all that jazz. Suddenly, she was asked to bring the prime minister an espresso. Not for a moment did she think she would elicit such a hilarious reaction. On the other hand, anything can happen in the Middle East. Assessments are always proven wrong. Expectations always fall short, and anything that can go wrong — will. Of all the options at any given point in time, the worst-case scenario will invariably be the one to materialize.

A few days after that meeting, one of its participants told me the following: “The Syrian revolt and civil war broke out precisely three years ago. If anybody at the cabinet meeting had told us three years ago that Bashar al-Assad would still be Syria’s president, we would have considered him to be a clown. Generally speaking, the whole chain of events we have seen in Syria in the past year is totally surreal. Three years ago, no one would have been able to predict that the struggle in Syria would go on for as long as it has, and it’s still going strong. If anyone had told us that the fatality toll would reach 150,000, we wouldn’t have believed him. If anyone had told us that a massive regional war between the Sunni and Shiites would break out — one that would see the involvement of all the regional forces as well as world powers — we would have laughed it off. But that’s a fact. All of this has happened; and not just happened — it’s happening now, right as we speak. And that’s not funny anymore.”

On Monday, March 17, one of Israel’s radio stations broadcast a compilation of assessments and commentaries that were aired during the first year of the war in Syria. Senior politicians, high-ranking officers, defense ministers, commentators and retired generals were all featured in that program. One after the other, they all predicted the impending end of the regime, opining that “Assad was finished.” They were all sure that the die had been cast. It was not a question of whether Assad would fall, but rather when.

Well, three years have gone by, and not only are the questions not resolved but they keep piling up. At present, there is not a single person in Israel’s highly developed intelligence and defense array that is willing to place a wager on where Assad, the insurgents or Hezbollah will be in two weeks, two months or two years from now, nor where Israel will be for that matter. Everything is possible.

The past three years can be divided into two parts. The first one is the initial two years during which Assad’s fall was certain. Everyone was busy splitting up the spoils, trying to forge an alternative in Syria. And then there is the past year, when it suddenly became apparent that Assad was not falling. Now everybody is trying to figure out where we are all headed.

During this period, Israel’s assessments and preferences have also changed. If in the first two years it was clear that Israel was wishing for Assad’s fall and for the dismantling of the elaborate “axis of evil” that sprawled from Tehran to Damascus and Beirut, with tentacles reaching as far as Gaza and Sinai, today this preference has been supplanted by confusion and disagreement. At present, most defense establishment professionals believe that Assad is the lesser evil. With him, we can at least do business, Israeli officials are saying. And this is something we cannot do with jihadist and al-Qaeda groups that swarm Syria and fight the regime.

The Israeli preference is for this state of affairs to continue for as long as possible with as few repercussions on the Israeli-Syrian border in the Golan Heights as possible. Israel has no problem with Syria being cantonized or split into regions, as long as Assad regains control of the (Syrian part) of the Golan Heights and restores the quiet that prevailed there for 40 years. In the interim, Israel quickly built a fence along the Golan Heights border. It deployed new units after having pulled out the armored division that was poised to stop the (now-defunct) armored Syrian divisions. In its stead, it deployed a division that specializes in low-intensity security and anti-terrorism.

Israel has also drawn up a new map of red lines and a balance of terror and deterrence vis-à-vis Assad and Hezbollah. And, according to foreign sources, it continues to strike any game-changing convoys consisting of weapons such as rockets, missiles or improved radar systems, which are en route from Damascus to Beirut.

We have entered a kind of violent routine, whereby each side is aware of its role and its limitations. “The only problem,” says a senior Israeli officer, “is that we’re all sitting on a very large powder keg. At any given time, something unpredictable might happen, tipping off the balance and blowing everything up.”

While this article was being written, an IDF paratrooper patrol went over a powerful improvised explosive device (IED) in the Majdl Shams area in the Golan Heights, seriously wounding one IDF officer and lightly to moderately injuring three soldiers.

According to one assessment, this was an attempt to kidnap a soldier. Israel pointed a finger at Hezbollah, which has decided to rewrite the rules of the game and draw a new red line in the sand. It is believed that Hezbollah — while still reticent to engage the IDF head-on — is willing to use proxies against the Israeli military to exact a price from Israel whenever it strikes one of Hezbollah's weapons convoys.