The Israel Defense Forces estimate that the Syrian war may last a decade, ending with Syria being divided into several cantons, with jihadist forces on the Israeli border and Hezbollah gaining in military experience. 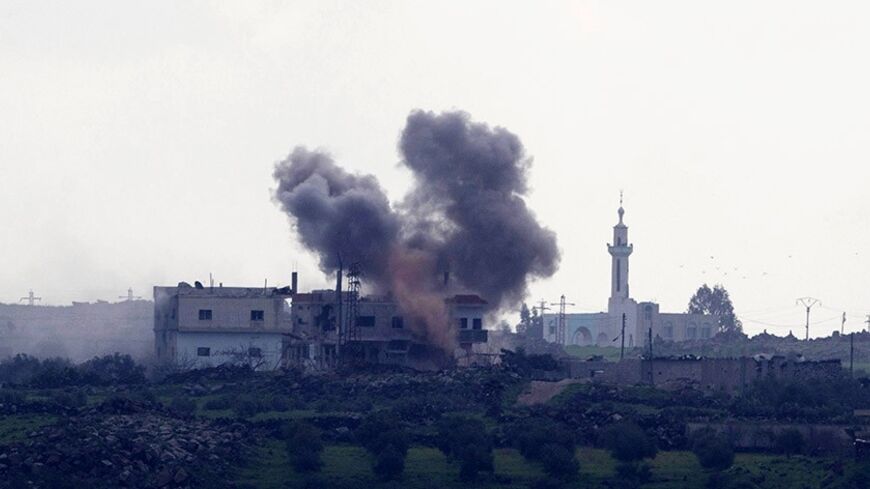 Smoke rises after shells exploded in the Syrian village of al-Jamlah, close to the cease-fire line between Israel and Syria, as seen from the Israeli-occupied Golan Heights, March 5, 2013. - REUTERS/Baz Ratner

It took quite some time, but eventually the Israel Defense Forces (IDF) changed its strategic assessment about Syria. We are talking about a dramatic change. Reminder: when the revolt in Syria broke out, all of Israel — be it the official, the secretive, the military or the diplomatic one — openly supported the rebels, eagerly awaiting the fall of Syrian President Bashar al-Assad. Then-Defense Minister Ehud Barak said in an interview, “Assad [the family] would fall in a matter of weeks.” On Israeli television channels, a news ticker constantly flickered at the bottom of the screen, reading: “Assad — the end!” A few months later, a question mark replaced the exclamation point in that ticker.

From an Israeli perspective, the fall of Assad’s regime would have led to the disbanding of the “axis of evil” that spans from Tehran to Beirut via Damascus. Most Israeli strategists would not sleep a wink because of it. If Syria were to fall, Iran would be isolated and Hezbollah neutralized. This would also affect the nuclear race and the balance of power vis-a-vis Israel. That was the thought in Israel back in the day.

The Syrian revolt is now three years old. Despite a rough infancy, it is maturing right before our eyes, with no intention of leaving anytime soon. Israel’s strategic assessment has changed from a “few weeks” to much longer. At this juncture, Israel Defense Forces top brass believe that the struggle in Syria could last as long as a decade. Wording this cautiously, a very high-ranking Israeli defense official told me: “We’re facing a decade of struggle in the Syrian environs.” Either way, Israel believes that the Syria we had come to know over the past few decades is gone. That Syria — where a balanced and complex coalition of minorities was able to maintain a stable, quiet and seemingly cohesive state — is a thing of the past. What will replace it? This is precisely what the battle, which could last for many years, is all about.

“It’s like flipping a coin,” a senior IDF official commented. “Either way, the result would be bad. A victory of a Russian-backed radical axis that consists of Iran-Syria-Hezbollah is not a positive thing for Israel. But on the other hand,” he added, “the concentration of all the global jihad madmen in Damascus and the Golan Heights is also a disconcerting development. So as far as we’re concerned, the alternatives are bad either way. And there’s also the possibility that these alternatives would coexist, which means that the current situation could last for many more years. Assad will keep his grip in Damascus and the Alawite strongholds, while jihadist forces will grow stronger and take control of all the other areas.”

The talk with the senior Israeli official took place before the Jan. 22 Geneva conference on Syria. “There will be more conferences in Geneva,” he predicted. “There will be Geneva II, and maybe also III, IV and V. This crisis is here to stay. The question is not so much whether Assad will fall or survive, but rather whether he will be able to regain control of a Syria we once knew. At present, the answer is negative. The once-powerful central government, which was able to hold together the country’s ethnic groups and provinces, is gone. In the future, we will see Syria disintegrating in one fashion or another. Either it will be divided into two or three cantons, perhaps a few more, or there will be some center that is connected in one form or another to a few provinces. Assad’s system was the only one that was able to hold Syria together, and it is that very system that enables him to survive to this day. Almost all the minorities and groups operating in Syria know that the only way to preserve their relative freedom and relatively safe way of life is to stick with Assad. All the other alternatives seem worse. That’s Assad’s secret. People are not fighting for the Assad family but for their own sake.”

At the same time, the various groups in Syria also understand that Assad will not last forever, Israeli officials estimate. That will all be water under the bridge. In the end, the country will converge into an “Alawistan” in Damascus and the west, with some parts of the Golan Heights as well as two or three independent and predominantly Sunni provinces.

Until that happens, much blood will continue to be spilled, Israeli officials opine. Currently, the rate of weekly fatalities in Syria stands at 500 to 600. These are horrifying figures, and the trend keeps going strong. Although both sides are weary, they have no choice.

So far, Israel isn’t complaining about the situation because it removes Syria from Israel's threat list. The Syrian army has been stricken off the list of forces threatening Israel, and Hezbollah is out of the game, at least for now. Just as the late Israeli Prime Minister Menachem Begin wished ''success to both sides'' in the Iran-Iraq war, Israel, too, tries at the moment not to meddle and not to take sides. The thing is that everyone realizes that at some point the “day after” will come, and that they need to brace for it.

Hezbollah is pushing the envelope in Lebanon and Syria. The paradox, says an Israeli security official, is that we were accustomed to see south Lebanon as a volatile and tense area whereas the rest of the country used to be calm. Now, the tables have turned. South Lebanon is the quietest region in Lebanon. The north of Lebanon is, at some level, embroiled in a civil war. “This year, the war has claimed 270 lives in Lebanon,” says an Israeli security official. “We see terror, instability and unrest.”

According to Israeli information, Hezbollah has yet to show real signs of fatigue. Clearly, though, the situation is very hard on the organization and there appears to be no respite in sight. The unequivocal order that comes from Tehran is to continue supporting Assad as much as possible, though the price is high and keeps getting higher. Yet, this situation also heralds problems, Israeli officials contend. The longer the fighting, the more Hezbollah trains, gathering experience and improving its capabilities. Israel already considers it to be a ''semi-regular'' army with state-like capabilities. Right now it is under tremendous internal pressure in Lebanon, sustaining losses and paying a stiff price. But for those who see clearly, it is obvious that once the confrontation is over, Hezbollah will be a far more dangerous, a better-trained and a more significant enemy facing Israel.