Israel’s quietest border in decades may become rife with terrorism were the Assad regime to fall, argues Ben Caspit. 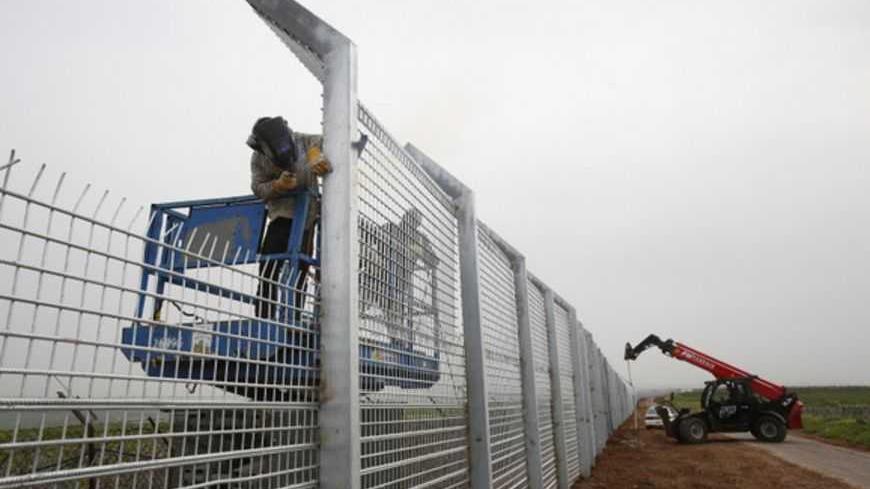 Laborers reinforce the fence near Israel's border with Syria in the Golan Heights, Feb. 14, 2013. - REUTERS/Baz Ratner

At the beginning, no one knew what to make of the Syrian rebellion. It began on a small scale in the town of Deraa, but refused to die down. Then, after a few months of marking time, the revolt burst out with colossal intensity. Syrian President Assad’s associates deserted one after the other, the army began to fall apart and the end seemed imminent.

I have been following the headlines accompanying coverage of the war in Syria on Israeli television for the last two years. The chronology is detached from what is happening on the ground. When the revolt gathered strength and Assad seemed desperate, the heading “Assad-The End” began to appear on the screen every time a report on the Syrian issue was broadcast. For long weeks, we followed Assad’s bitter end with great interest and bated breath. But the end did not arrive so fast.

Afterward, when it became clear that this was going to be a protracted, laborious story whose resolution was shrouded in mystery, the heading changed to “Assad-The End?” The question mark was added by those who had learned from experience: that as opposed to the other “springs” that blossomed in the Arab world, the Syrian matter had a life of its own and a totally independent course. And now, when no one really understands what and how is happening there; and how, when and if it will ever come to an end — I would suggest changing the heading again. I would leave only one large question mark, suspended above us all.

Someone not connected to the battlefield but who is well acquainted with it told me a few months ago that the Syrians “will continued to kill one another for a long time.” Exactly. Meanwhile, we have long held the conception that Assad’s fall would herald positive, encouraging tidings for Israel, the West, the moderate countries and peace seekers from all over the world. However — according to my high-placed Israeli defense establishment source — this conception has been gradually eroded. This man, who is deeply familiar with the Syrian arena, who has followed the events in Syria for decades, and who can enumerate Assad’s generals in the order of their defection — in his sleep — says, “I am not sure we won’t long for Assad in the near future. In fact, we may even miss him already.” That’s what happens when we approach the unknown. Suddenly it becomes clear that life after Assad, if such a thing will ever happen, will be a lot less clear and predictable than we planned.

Syria under the Assad family was the most stable country in the region, period. You knew where the country began and where it ended. They [the rulers] kept their word; their border was a real border; the Golan Heights was much quieter than the border of peace in Sinai [Egyptian border] and even the one in the Arava [Jordanian border]. Our sources [Jeremiah] say, “trouble will come from the North,” but that was not exactly precise. Since 1973, almost no troubles have come from the North. Assad had a subcontractor charged with making troubles for Israel, a subcontractor called Hezbollah, but we learned to live with that organization, too. Besides, with regards to Hezbollah we can mainly address our complaints to ourselves.

Our lives vis-à-vis Assad were placid, even boring. Israel boned up on Hafez al-Assad, then on his son: Israel invested time and effort in learning about their advantages and disadvantages. Both former Prime Ministers Rabin and Barak squandered opportunities to sign peace agreements with the Assad family. But even in the years that followed, matters appeared clear, peaceful, and exact. Yes, Assad contributed his part to the axis of evil; he nurtured Hezbollah and encouraged Iran. But he was careful to leave Israel’s borders alone, and was well aware of his subordinate position.

All we had to do was invest in good intelligence on the goings-on in the presidential palace in Damascus, keep a close eye on the transportation routes between Teheran-Damascus-Beirut, and sleep pretty well at night. All this, even when it became clear that Assad was quietly building a secret nuclear reactor in a God-forsaken place in his country. The fact is that due to the strange relationship between the sides, this reactor disappeared without a war breaking out. It disappeared without a trace.

That Syria was, and is no longer. It is breaking up in front of our eyes. The Somalization of Syria (collapse of the central government) is bad news for everyone, and Israel heads the list of the worriers. If and when the Assad regime becomes extinct on the declarative level (physically, large sections of it are already missing), Israel will have to treat Syria as it does Gaza, and that is a best-case scenario. We are talking about a country full of breakaway factions, some of them radical and dangerous, that will divvy up among themselves the mass destruction treasure-hoards of the Baath regime. A post-Assad country will provide fertile ground for the growth of al-Qaeda, a global jihad movement, and all kinds of afflictions and misfortunes that will make Israel’s life pure hell. Take Afghanistan, place it on the northern border in the Golan Heights, and see what happens.

Even the advantages inherent in Assad’s fall, also seem more limited and shriveled today than we had thought. Iran and Hezbollah are already adapting themselves. They will take over regions in the new Syria, they will pave themselves bypass routes, they will build outposts and bastions and somehow manage to retain safe passage between Beirut and Damascus, or at least most of that area. Iranians have considerable means to achieve this goal, and Hezbollah has no compunctions about stirring up agitation in Syria; its fighters have done whatever they wanted there for a long time.

On the one hand, the fall of Syria will indeed constitute a blow to what we call the “axis of evil,” but on the other hand it has the potential to transform the entire country into an unfamiliar, evil entity. This “evil entity” is not on the conventional level, that story is long passé. Instead, we are talking in terms of advanced weapons, weapons of mass destruction, rockets, sophisticated long-range heavy missiles as well as many other weapons that can cause severe headaches in Jerusalem and nervous, tense lives in Israel’s North. Israel’s quietest border in decades may become a border of terror. Even now, wayward mortar shells land on Israeli territory every now and then. A few days ago, a tank shell fell in one of the Golan’s kibbutzim; it did not explode. And that is only the promo.

The opinion of the high-echelon defense official with whom I spoke last week is still not the majority opinion on the Syrian issue. Meanwhile, that is. Israel still has more people hoping for Assad’s departure, than those who worry over such a change. The earth trembles under our feet, old conceptions are beginning to change, the minority opinion is gaining ground, and difficult, nagging questions are starting to emerge. Israel became accustomed to Assad, learned how to live and thrive with him, with all his advantages and disadvantages. The Day After, if it ever comes, is an unknown factor. The Middle East is governed by the laws of the jungle and one of these laws says that “unknown factors” transform, at a certain point, to something terrible. Show me an example of pleasant surprises that ever happened here to someone.