The Senate confirmed Chuck Hagel as secretary of defense as the United States announced $60 million in non-lethal aid to the Syrian Opposition Council; Israel, Iraq and Lebanon continue to be concerned about the regionalization of the war in Syria; and Iran puts Syria in play after the P5+1 meetings. 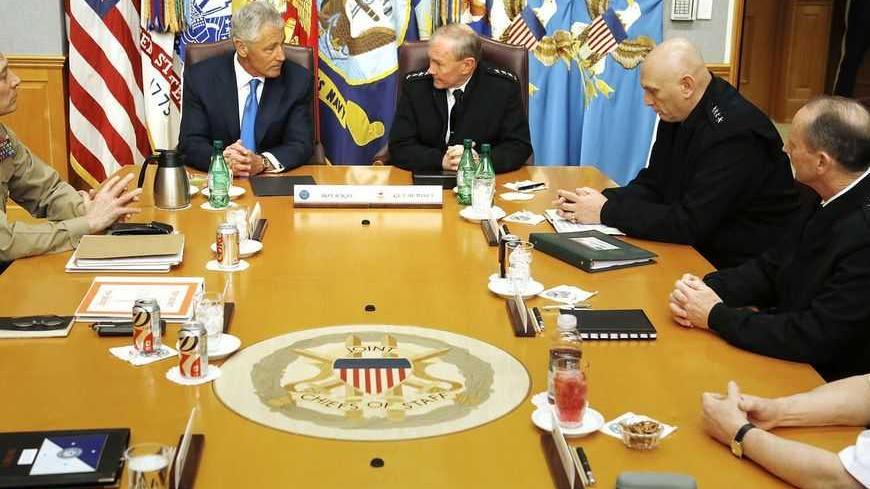 US Secretary of Defense Chuck Hagel holds his first meeting with the Joint Chiefs of Staff at the Pentagon, March 1, 2013. - REUTERS/Jonathan Ernst

On Feb. 26, former Sen. Chuck Hagel was confirmed as US defense secretary. The campaign against Hagel’s confirmation was an embarrassment and a loser for those who waged it, as Akiva Eldar wrote this week. The allegation of an anti-Israel bias by Hagel continues to be revealed as the falsehood it was from the start.  Former Israeli Consul General in New York Alon Pinkas, a regular contributor to Al-Monitor, wrote elsewhere this week that Hagel is “a friend in the Pentagon” for Israel. Israeli President Shimon Peres lauded Hagel’s appointment.

As Hagel takes over at the Pentagon, it's worth recalling an exchange he had with Sen. John McCain about Syria during his confirmation hearing on Jan. 31.  McCain asked Hagel: “How many more would have to die before you would support a — arming the resistance and establishing a new fly zone — no-fly zone?”

Hagel responded, “I don’t think anyone questions the terrible tragedy that is occurring there every day. It’s a matter of how best do we work our way through this so that we can stop it, does — to begin with. And then what comes next? I think the president was pretty clear on this. ”

Secretary of State John Kerry announced $60 million in non-lethal assistance to the Syrian Opposition Council, which is in addition to the $50 million in mostly humanitarian assistance that the United States already provides.

The new assistance package does not appear to be a “major policy shift” toward military support, as The Washington Post had anticipated in an article this week,  but rather an effort by the administration to support moderate elements in the opposition who have little or no influence over the increasing numbers of jihadist fighters linked to al-Qaeda.

With the aid announcement, Washington is not giving up on a negotiated outcome in Syria.  Kerry said: “Our choice is a political solution, outlined in the Geneva communique, which Russia has also signed onto. It is in line with the opposition’s own transition plan, and this must include a transitioning governing body with full executive powers formed on the basis of mutual consent.”

A debate will likely continue in the Obama administration about whether the United States should do more to support the Syrian opposition. Besides McCain, others in Congress, including Sen. Marco Rubio, a possible Republican presidential contender in 2016, are calling for the United States to arm the rebels, as reported by Barbara Slavin.

The lessons of Iraq, Afghanistan and Libya should weigh heavily on the minds of policy-makers in consideration of any steps toward military “mission creep” in Syria.  The wisdom of Hagel’s answer on Syria — how to stop the killing?  What comes next?— should continue to be the guiding questions for policymakers to bring an end to the Syrian tragedy.

The Regionalization of Syria:  Israel, Iraq, and Lebanon

The disastrous consequences of the war in Syria for the region, especially the rise of jihadist forces linked to terrorist groups, continue to be deeply covered by Al-Monitor.

In a groundbreaking article for Al-Monitor, Ben Caspit reveals the worries in Israel about the collapse of the state in Syria. Caspit writes: “The Somalization of Syria (collapse of the central government) is bad news for everyone, and Israel heads the list of the worriers. If and when the Assad regime becomes extinct on the declarative level (physically, large sections of it are already missing), Israel will have to treat Syria as it does Gaza, and that is a best-case scenario. We are talking about a country full of breakaway factions, some of them radical and dangerous, that will divvy up among themselves the mass destruction treasure-hoards of the Baath regime. A post-Assad country will provide fertile ground for the growth of al-Qaeda, a global jihad movement, and all kinds of afflictions and misfortunes that will make Israel’s life pure hell. Take Afghanistan, place it on the northern border in the Golan Heights, and see what happens.”

In an exclusive interview with Al-Monitor, Iraqi National Security Adviser Faleh Al-Fayad  said that “the rise of terrorist activity in the country [Iraq], which in turn can be traced back to the terrorist safe havens that were created by the situation in Syria.”

Al-Monitor continues to lead in its coverage of the effects of the Syria war in Lebanon, a trend picked up by The Washington Post on March 3. Nasser Chararah  had already broken the story of Hezbollah’s defense of Lebanese villages in Syria in an article on Feb. 20.  Ali Hashem reported this week that Hezbollah Secretary-General Hassan Nasrallah's Feb. 27 speech was a “message to the Lebanese government was one of criticism for not attempting to help the 30,000 Lebanese living in Syria who are facing what he called ‘sectarian cleansing.’” Jean Aziz wrote that Nasrallah’s speech placed Beirut on edge, with parallels to 2008. Elie Hajj wrote that the worsening of Lebanon’s security situation, as a result of Syria, is leading to an increase in crime.

Laura Rozen provided round-the-clock coverage of the nuclear talks last week in Kazakhstan between the P5+1countries and Iran, including breaking the new sanctions relief package offered by the P5+1. Mohammad Ali Shabani and Meir Javedanfar provided early and comprehensive analyses of the outcome of the talks.

On March 2, less than a week after the talks in Almaty, Iranian Foreign Minister Ali Akbar Salehi put down a marker on Syria when he said, at a news conference with Syrian Foreign Walid  Muallem in Damascus, that  "in the next election, President Assad, like others, will take part, and the Syrian people will elect whomever they want … [the] official position of Iran is that ... Assad will remain legitimate president until the next ... election"  in 2014.

Iran proposed strengthening joint cooperation with the P5+1 on Syria and Bahrain in its five-point proposal to the group in August 2012.  Tehran still considers that proposal as its basic framework for the talks.

As this column noted in December, Iran’s influence with Syrian President Bashar Al-Assad begins where Russia’s influence ends. A political outcome for Syria will only come through the intervention of Iran, which remains the primary backer of the Syrian government and the ultimate broker of any deal between the regime and the opposition. On Feb. 3, Iranian Foreign Minister Salehi met for over one hour with Sheikh Moaz Al-Khatib, chairman of the National Coalition for Syrian Revolutionary and Opposition Forces, showing Tehran’s reach with both the government and the opposition.

If Iran is offering to help broker a deal for a ceasefire and transition, Washington should consider picking up Tehran’s offer. It is only nine months until 2014, when constitutionally mandated elections in Syria are scheduled to take place. For those who engage the fantasy that there is a deal to be done in Syria without Iran, it is worth considering how much worse would be the conditions in Iraq and Afghanistan if Iran did not recognize Prime Minister Nouri al-Maliki  and President Hamid Karzai.  If the objective is to stop the killing and try to shape what comes next in Syria, Iran, which is also threatened by the ascendance Sunni Jihadist terrorists in the region, has a role to play.