The Iraqi and Turkish Fault Lines

The Syria war spreads to Iraq; Turkey is increasingly divided over Prime Minister Erdogan’s Syrian policies; and Secretary of State John Kerry’s trip to the region includes progress toward a political solution in Syria. 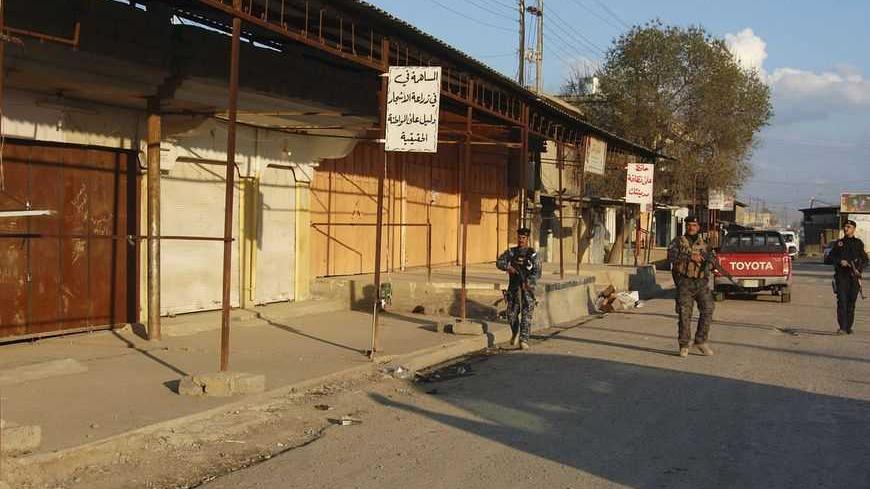 Iraqi police stand guard during foot patrol at Rabia, near the main border between Iraq and Syria, March 2, 2013. - REUTERS/Khalid al-Mousuly

On March 5, Syrian militants reportedly affiliated with al-Qaeda attacked a convoy of Syrian and Iraqi soldiers near the Rabia border crossing in western Iraq. Forty-eight Syrians, mostly military, and nine Iraqi soldiers were killed. The Syrians had earlier received medical treatment in Iraq.

As Mushreq Abbas reported for Al-Monitor, the ambush at the border should not just be considered a  “military confrontation in the strictest sense of the word, but rather was an extension of the national turmoil on both sides of the border.”

Iraq is also breaking down along sectarian fault lines similar to those destroying Syria, as the civil war there spills over the borders, playing into Iraq’s own factional politics, which remain at high boil.

Iraq’s Speaker of the Council of Representatives Osama Al Nujaifi, a Sunni with the Iraqqiya Party list, accused Iraqi Prime Minister Nouri Al-Maliki of meddling in Iraq’s independent commissions by removing Falah Shanshal, head of the Justice and Accountability Commission, which handles de-Baathification, as reported by Ali Abel Sadah for Al-Monitor. Nujaifi added that that the Iraqi government has done little to address the demands of demonstrators in Anbar province, as reported by Azzaman and translated by Al-Monitor.

The escalation took an ethnic twist when Maliki sent a new military force to the western Sinjar province of Iraq’s Nineveh governorate, which is considered disputed territory by the Kurdistan region.  As reported by Abdel Hamid Zebari, the deployment was protested by Iraqi Kurds and came just days after a visit to Iraq by Iranian Foreign Minister Ali Akhbar Salehi.

Iraqi politics is more complicated than ever as the campaigns for provincial elections, scheduled for April 20, have started.  As Mustafa Al-Khadimi reported for Al-Monitor, “political and economic crises, sectarian speeches and security concerns lie at the heart of any election. Yet, this season is characterized by additional phenomena, such as the rise of political families and undeveloped political performance.”

This column has commented on Iraq as a fault line in the sectarian conflict that is taking place in the region. The Syrian war must be seen in the broader regional context, which, by the way, is how it is viewed by decision makers in the Middle East.

The visit of four parliamentarians from the opposition Republican People’s Party [CHP] to Damascus to meet with Syrian President Bashar al-Assad represents something more than a publicity play by the Turkish opposition.

Kadri Gursel has written a brilliant and searching essay that examines how the visit is yet another sign of the failure of the ruling Justice and Development Party to make the toppling of Assad a national cause in Turkey.  If Erdogan had even a sliver of success in this effort, the CHP members would not have dared go to Damascus, even on a so-called “humanitarian mission” to seek the release of captive journalists.

Assad reportedly said to the group: “Turkey has the most influence on the situation in my country. Most weapons and terrorists come via Turkey. Twenty-five percent of our land border with Turkey is under the control of the PKK, and 75% of it is under al-Qaeda … There is an increased opportunity for the Kurds to set up a state in the region. Kurds in northern Syria have linked with Iraqi Kurds. It is a matter of time for a Kurdish state.”

Assad’s reference to the Kurds was a transparent play to Turkish nationalism, as Gursel points out. But the Kurdish issue is nonetheless more complicated and uncertain than ever.  Wladimir van Wilgenburg reported that the “Democratic Union Party (PYD) and its militia, the Kurdish People’s Defense Units (YPG), are increasingly using the power vacuum to create a form of Kurdish autonomy,” including seizure of oil fields.

Cengiz Candar had opportunity to talk with Sheikh Moaz al-Khatib, head of the National Coalition of Syrian Revolutionary and Opposition Forces.  Al-Khatib, who has not ruled out negotiations with the Syrian government, lamented the U.S. preoccupation with Salafist groups in the Syrian opposition.  Sheikh Moaz acknowledges the current stalemate in the military confrontation between the Syrian government and opposition forces, and remarked that Iran and Russia are giving Assad the wrong advice.

As Gursel points out, disagreement over Erdogan’s Syria policy is not just a matter of opposition politics in Turkey; it is dividing Turkish Sunnis and Alevis, and raising antagonism and polarization throughout Turkish society.

Kerry, Syria and the Political Solution

U.S. Secretary of State John Kerry returned from his first trip to the Middle East — including Turkey, the UAE, Egypt, Saudi Arabia and Qatar — with perhaps some glimmer of progress for a political solution in Syria, which remains the U.S. priority.

This column reported last week on Kerry’s announcement of non-lethal aid to the Syrian opposition and its consequences. Some Western media reporting has focused on whether the aid announcement and Kerry’s visit signaled a step toward ‘doing more’ to assist the armed opposition in Syria.  The aid announcement is indeed a sign of ‘doing more.’ Kerry said the United States seeks to change Assad’s calculus through aid and pressure. And the battle may be joined in Washington on whether even more is to be done, as Geoffrey Aronson wrote this week.

U.S. ally Qatar, which along with Turkey is the main provider of arms to the rebels, would prefer that the United States "do more" in Syria. In Doha, Prime Minister and Foreign Minister Hamad bin Jasim Al-Thani appeared to lecture the Kerry on the imperative of a military solution.

Despite Sheikh Hamad’s position, Kerry kept the focus on a political solution at a news conference in Doha on March 5: “It is only through the Geneva communique where you bring a transitional government with full executive power with all parties agreeing to it – the opposition and the Assad government – and then you give the Syrian people the opportunity to choose the future. That’s what we’re committed to, and we will continue down this road in close consultations so that we continue to put the pressure on.”

Kerry’s statement came just one day after Iranian Foreign Minister Salehi wrote in a March 4 letter to U.N. Secretary-General Ban Ki-moon that Iran, Egypt and Turkey are working  “within the trilateral framework, are continuing their consultations in finding a peaceful solution to this crisis through participation of all parties in Syria.”

Both Kerry and Salehi used the phrase “all parties.” Elections are increasingly in play as part of the transition phase in Syria. As this column noted last week, Salehi said  on March 2 that  "in the next election, President Assad, like others, will take part, and the Syrian people will elect whomever they want … [the] official position of Iran is that ... Assad will remain legitimate president until the next ... election"  in 2014.  In response to a question by a Turkish reporter on March 7 about the feasibility of a Syria without him, Assad replied: "I can’t leave even if I wanted to. I will not abandon ship until we get to a calm port in this storm. My people are behind me. If the storm ends one day, if there are elections, democracy comes and people tell to me leave, then I will. I mean I will go if I have to, but my people have to tell me that."

As Geoffrey Aronson wrote on Feb. 6: "In the past, the suggestion that Assad was prepared to lose an election in 2014 could not be made in polite company. No longer. This change does not insure success, but at the very least it helps to establish a formidable and broad-based diplomatic counterweight to the killing.”

Syria remains in crisis, and all hopes for a peaceful outcome may yet come to naught, as the parties seem to remain in a killing mood for now, but the signs of a trend toward a political solution deserve attention and priority, as the pursuit of a military solution means only more tragedy and destruction for Syria and the region.