Kerry to Assad, Opposition: 'Come to the Table'

US Secretary of State John Kerry calls on Syrian President Bashar Al-Assad to “come to the table” to begin negotiations; the bitter springs of Tunisia and Egypt; and Gaza Salafists fight in Syria. 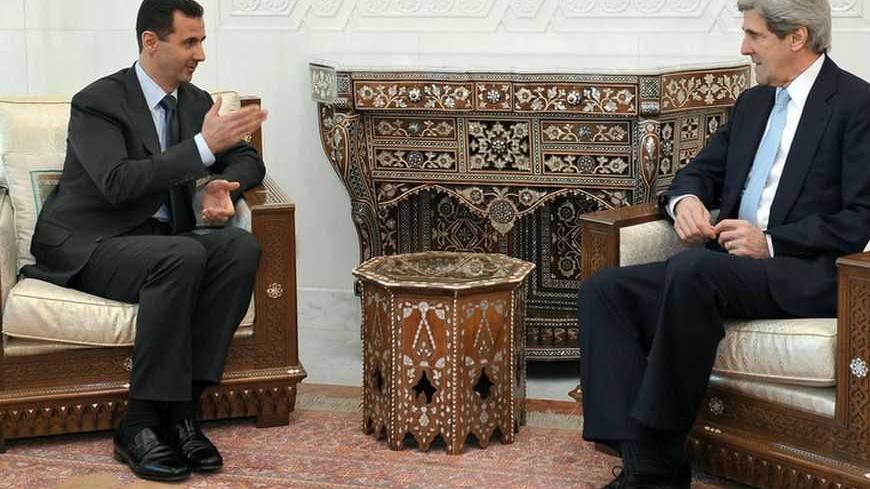 Kerry: "Come to the Table"

US Secretary of State John Kerry this week pressed both Syrian President Bashar Al-Assad and the Syrian opposition to begin direct negotiations on a transitional government.

In a press conference with Norwegian Minister of Foreign Affairs Espen Barth Eide on March 13, Kerry said: "...We want to be able to see Assad and the Syrian opposition come to the table for the creation of a transitional government according to the framework that was created in Geneva, the Geneva Protocol, which requires mutual consent on both sides to the formation of that transitional government. That’s what we’re pushing for. And to do that, you have to have President Assad change his calculation so he doesn’t believe he can shoot it out endlessly, but you also need a cooperative Syrian opposition to come to the table, too. We’re working on it, and we will continue to work on it."

Kerry’s announcement may be seen as support for Moaz Al-Khatib, leader of the National Coalition for Syrian Revolutionary and Opposition Forces, who is under siege within the opposition for both his willingness to negotiate with Damascus and his resistance to setting up a provisional government, as was reported this week by As-Safir and translated by Al-Monitor.

Mustafa Al-Sabbagh, the Coalition’s secretary general, is behind the pressure on Al-Khatib. Al-Sabbagh represents a faction within the coalition backed by Qatar, which has no interest in a political solution. French Foreign Minister Laurent Fabius on March 14 called for lifting the arms embargo on support for the rebels, which could embolden more hard-line elements within the opposition, as well as those in Washington who want the US to provide arms to the rebels.

This column has reported time and again on the possibilities for, and urgency of, a political solution, including engaging Iran, which has officially, through the P5+1, expressed a willingness to strengthen cooperation in dealing with Syria, as Seyed Hossein Mousavian wrote last week. The military option, encouraged by Qatar and its acolytes within the opposition, will only accelerate the killing and state collapse in Syria that is taking place. It can and might get worse, absent a negotiated transition.

Geoffrey Aronson wrote this week that outgoing Commander of US Central Command, Gen. James Mattis, believes that even Assad’s demise “would not end the story but rather create conditions for continuing sectarian conflict in Syria and perhaps throughout the region.” Mattis said, “I believe [Iran] will arm militias inside the country to try to create a Lebanese Hezbollah-type effect, and they would redouble their efforts via-a-vis Iraq, Bahrain, Yemen and elsewhere. I think that's, on a strategic plane, what we would see as part of their shift.”

In other words, as we wrote in December, in any endgame scenario, "the 'final days' may be more illusion than reality."

The Bitter Springs of Tunisia and Egypt

Al-Monitor featured exclusive reporting this week from Tunisia and Egypt on the state of political transitions in the two countries where what was once known as the ‘Arab Spring’ got its start.

In Tunis, the self immolation of a man screaming, "This is Tunisia! This is unemployment!" on March 12 was a bitter reminder of how it all began on December 18, 2010, when Mohammed Bouazizi set himself on fire in the city of Sidi Bouzid as an act of protest following his mistreatment and humiliation by municipal authorities.

Fernande van Tets reported from Tunis of the dashed hopes of a civil society and protest movement that is just as detached from the present government as it was from the pre-revolutionary government:

"Initially a social movement, with a call for dignity and bread, the focus has now shifted from economic to rights issues and a battle for the role of religion in the Tunisia of tomorrow. The constitutional assembly has been working for two years, but has failed to pass any meaningful economic legislation. Instead, it bickers over how many times the word Islamic will be mentioned in the introduction to the document."

In Egypt, Bassem Sabry reports that many Egyptians are even re-thinking the reign of former President Hosni Mubarak in light of Egypt’s current despair. While Sabry does not share the nostalgia for Mubarak, he laments that "The most regrettable fact, however, is that post-revolution Egypt doesn’t seem anymore to be surely on a path towards improvement."

The disappointment of Tunisians and Egyptians casts a new line on the transitions we are witnessing in the region. If indeed we are to characterize Tunisia and Egypt as “post-revolutionary," then these are Islamic Revolutions—at least so far.

In an Al-Monitor exclusive, Asmaa al-Ghoul writes on Salafists from Gaza that have joined Jabhat al-Nusra to fight the regime of Syrian President Bashar al-Assad.

Ghoul‘s superb report includes conversations with jihadists, family members of fighters killed in Syria, a leading Hamas official, and a top expert on Salfism. Her article reveals the passion among those in Gaza’s Salafi community for the struggle in Syria, and connections to wider Salafist movements and to patrons in the Gulf.