No Military Solution for Assad Or the Rebels

Secretary of State John Kerry has said that Syrian President Bashar al-Assad can't "shoot his way out" of the civil war; but neither can the opposition, writes Geoffrey Aronson. 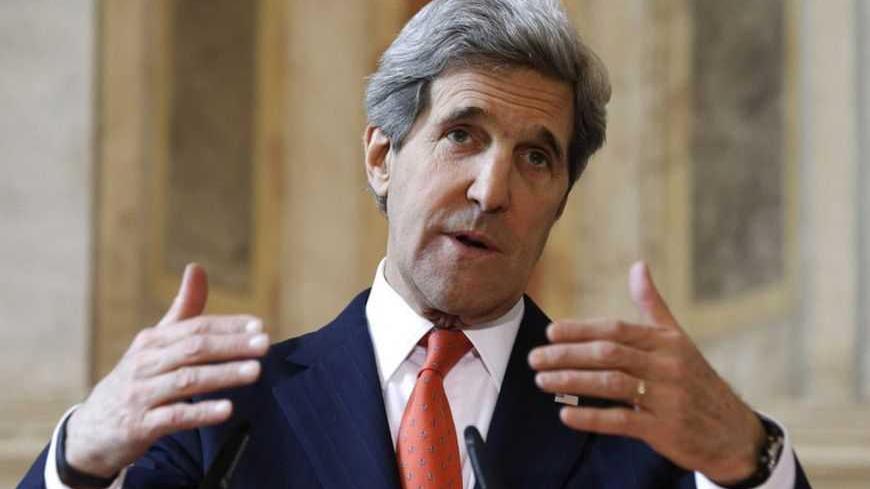 US Secretary of State John Kerry speaks about a US pledge to provide non-lethal aid to Syrian opposition, at a news conference at Villa Madama in Rome, Feb. 28, 2013. - REUTERS/Jacquelyn Martin

Newly minted Secretary of State John Kerry recently opened the door to a modest but nevertheless significant revision of U.S. policy. The offer of non-lethal assistance was apparently the least Kerry could do to prevent an opposition walkout at the recent meeting in Rome. Notwithstanding president of the National Coalition for Opposition Forces and the Syrian Revolution Moaz al-Khatib’s support for a dialogue with the regime, the opposition has a congenital fear an American sellout. The US action offered support for the view that Washington can be successfully, if incrementally, “pushed from behind” — to keep faith with the militant opposition and to maintain a rein on the more aggressive actions of Sunni Arabs and others who see Syria as a proxy for the battle for regional sectarian domination opened to their disadvantage by Washington in Iraq a decade ago.

The Obama administration long ago declared that the fall of the Assad regime is a moral and policy imperative. It is having more difficulty, however, deciding upon the most effective means to achieve its much-desired end.

The trouble started when President Barack Obama announced in August 2011 that Assad simply had to go … and he stayed, with help from his friends in Tehran, Baghdad and the Bekaa. The Russians proved a surprise when they failed to follow the script that Washington had prepared for them. Putin is watching a different Syrian movie than Obama, and it took the better part of two years until the former Cold War rivals thought about sharing the popcorn.

A joint U.S.-Russian commitment to maintain Syria's territorial integrity and reaffirm the vague outlines of a democratic political transition was agreed on late last year , soon after Obama's controversial decision to keep US-supplied arms out of opposition arsenals.

Obama’s judgment not to arm the rebels was difficult but proper. But it was not universally popular in the system that he commands. In the bureaucratic trenches, and among the president’s top advisers, the policy battles continue. Obama's then Secretary of State Hillary Clinton and Defense Secretary Leon Panetta went public with their disagreements with Obama and their support for arming the opposition, although to what extent it was never made clear. The American public was then treated to the extraordinary spectacle of Panetta and his top military adviser, Chairman of the Joint Chiefs of Staff Gen. Martin E. Dempsey, publicly declaring in testimony before the US Congress their opposition to the president’s decision not to supply weapons to Assad’s fighting opponents.

The recent policy shift by Kerry in Rome was not however, the last in the on-again, off-again love affair with the opposition, whose leader Khatib is now referred to as “President” Khatib in official U.S. State Department briefings … really. If only wishing could make it so. Just ask the president of Palestine, Mahmoud Abbas.

The battle for U.S. policy has been publicly joined by CENTCOM commander Gen. James N. Mattis,who leads U.S. military operations throughout the Middle East. Mattis will soon relinquish his post, and this is perhaps the reason that he publicly poured ice-cold water on the idea of arming the opposition.

Those in the Pentagon with the most experience in the region have long been skeptical about the utility of the military options tossed around by those who dream of a military victory over the regime. Mattis told the Senate that Washington does not have the basic tools necessary for a successful escalation. It simply does not know enough about Syria to warrant a decision to arm the opposition. It lacks the capability on the ground to insure that the prime beneficiaries of such an action will not be the other “bad guys” — Assad's  jihadist opponents, who are also enemies of the US. Just being my enemy's enemy Mattis counseled, does not make them my friends.

"That would be the one caveat that I would put on any military advice to go forward along those lines. We don't want to inadvertently, with the best of intentions, arm people who are basically sworn enemies," he warned.

The point where U.S. national interests and the war in Syria meet, Mattis stressed, is the fate of Syria's non-conventional arsenal of chemical weapons. But where the (illusory) specter of non-conventional nuclear weapons in Iraq was hyped to legitimatize a U.S. invasion of that country, Mattis's counsel on what to do about the prospect of Syria's “loose” chemical weapons was far more nuanced.

He explained that Washington is planning with regional partners and others to secure Syria's chemical weapons stockpile, which he described as "increasingly vulnerable, as Assad “loses ground” to his armed opponents. … The geographic area he controls is eroding daily. You see him using ballistic missile in order to try to impact those areas he's lost control on. Notice how the increased use of those missiles over the last month or two has been evident. So he is losing ground. "

"We have increasingly vulnerable chemical sites there as this fighting swings back and forth,” Mattis said, “as weapons get transferred from one vulnerable site to one they believe is more secure, as the — certainly the material aspects of their leadership could cause them to do things that cause us to keep a very, very close eye on them. Our planning is taking this into account to the degree that it can, and I'll just tell you that we have options prepared."

Mattis mentioned the Arab League and the Gulf Cooperative Council among those with whom the United States is consulting. Israel went unmentioned but is also a player. "We are doing some planning with the regional militaries and getting basically a framework for what this would look like."

Mattis said that the United States has the capability to prevent the transfer of chemical weapons to Hezbollah. "I have military options if [the president] wants to prevent -- if he wants to disrupt that. It would be very difficult to prevent it at the beginning, either use or transfer, but as fast as we picked it up, we could disrupt it, and we may be able to prevent further transfer or use."

Mattis supports the view that Assad's demise would serve a body blow to Iran, but that this would not end the story but rather create conditions for continuing sectarian conflict in Syria and perhaps throughout the region.

“I believe [Iran] will arm militias side the country to try to create a Lebanese Hezbollah-type effect, and they would redouble their efforts via-a-vis Iraq, Bahrain, Yemen and elsewhere. I think that's, on a strategic plane, what we would see as part of their shift."

Kerry has made the important point that Assad is “delud[ing] himself in pursuit of the military solution. … The simple fact is Assad cannot shoot his way out of this.”  Nor, Mattis warns, can the opposition.