Secretary of State John Kerry, a veteran and critic of the Vietnam war, is now himself a decision maker regarding U.S. policy toward the civil war in Syria, writes Geoffrey Aronson. 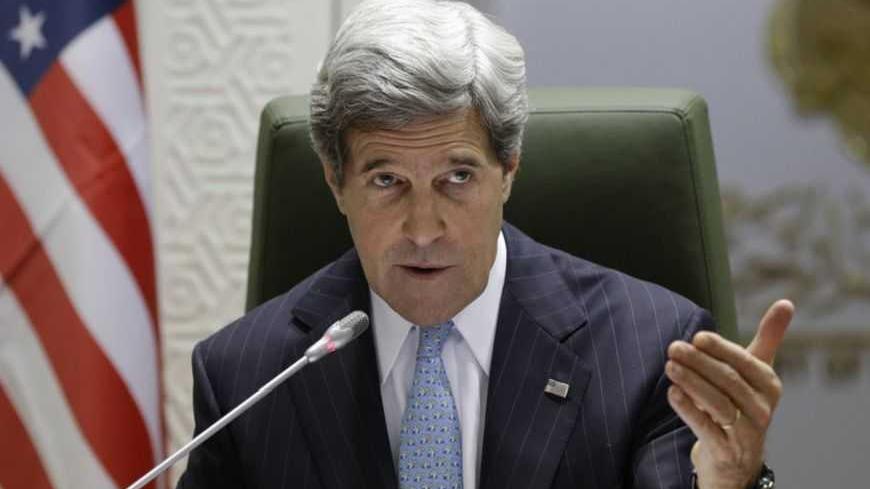 US Secretary of State John Kerry speaks during a news conference at the Ministry of Foreign Affairs in Riyadh, March 4, 2013. - REUTERS/Jacquelyn Martin/Pool

The Obama administration's newly minted secretary of state was a young man of 28 when, as leader of the Vietnam Veterans Against the War, he famously challenged the nation to face the demons it had created in pursuit of an unattainable victory in Vietnam.

As a nation watched in fascination, Kerry spoke truth to power. Today, the 69-year-old is sitting on the opposite side of the table as the diplomatic architect of what  former secretary of state Madeleine Albright called the world's “indispensable power.” From his new perch, the options are more ambiguous and that the truth is only one element in policy colored in shades of gray rather than black and white. And he is discovering that it is not so easy to be to be indispensable and to lead from behind at the same time.

President Barack Obama's decision in November to keep aloof from the Syrian “quagmire” was brave, but it has proved unpopular everywhere but Moscow, Teheran and Baghdad and, yes, throughout the width and breadth of the United States, where the warnings of a young Vietnam veteran still resonate. The president himself is responsible for the disappointment of those in the press, Congress and policy community who understandably thought that when Obama declared that Assad had to go, he meant it … really, and that he would commit the US to do whatever necessary to achieve this objective, including arming Syria's growing military opposition.

Many in the opposition smelled a sell-out, but in the last weeks of 2012, Obama's decision helped to establish a new space for diplomacy, based upon a rapprochement between the US and Russia. This newly energized dialogue marked an end to fruitless US efforts to shame Moscow into “doing the right thing.” The belligerent Russian leadership has also moved in Obama's direction, conceding its unconditional support for the Assad regime.

Kerry is said to believe that the only way out from the current crisis is through the adoption of a political solution that enjoys Russian support. He knows that in order for the Security Council to issue a decision on Syria, an American-Russian understanding must first be reached.

Those looking for positive statements on the negotiated outcome Kerry prefers have not been disappointed. Encouraging comments on diplomatic engagement have been heard from the protagonists themselves; on the Syrian side, Foreign Minister Walid Muallem, and most notably from the head of the “legitimate” opposition Moaz al-Khatib. The differences separating former top members of the ruling elite — now re-branded as opposition men like Khatib, Manaf Tlas and former prime minister Riyad Habib — from those still in their chairs — Muallem and Foreign Minister Farouk as-Shar'a, seem bridgeable. Assad himself even spoke of returning to his medical practice after (losing) an election in 2014.

Among many in this group, there is a broad recognition that the state and its institutions must be preserved and that a ceasefire and dialogue on a managed transition to democratic elections offer the best chance for success. Yet, while the notes are similar, the songs each is singing are not. If the US is to lead, Kerry must convince the opposition and their allies in Turkey and the Gulf that dialogue is the key to regime change, while Russian Foreign Minister Sergey Lavrov must convince Assad that it is not.

Notwithstanding Obama’s declared reluctance to escalate the pace and character of US material support for Assad’s opponents, it is difficult to fight something with nothing, and more difficult still if you are reluctant to lead the process — even “from behind” — in a new direction. In his first days as secretary of state, Kerry established three guideposts to US policy.

“In the face of such murder and threat of instability,” he said on the eve of the opposition meeting in Rome, “our policy cannot stay static as the weeks go by.”  Assad’s vicious pursuit of the war against his own people offer “further evidence that Assad has to go.” US efforts will be calibrated in order to “change the calculation on the ground for President Assad” in favor of a political solution. The recently announced aid package for the opposition marks the transition to  Kerry’s “ownership” of  the Syria file.

As Kerry well knows, policy is far messier than the clinical progression towards Assad’s ouster that his comments hopefully suggest. The happy outcome may well be along the lines that Kerry outlined. According to this scenario, Washington's escalation of support for the opposition, and more dramatic military assistance provided by others — Turkey, the Gulf, and the EU — will change Assad’s calculation in favor of abdication and the collapse of the regime

But it is a truism in Washington that “it's not over 'til it's over.” Senior elements in the US government oppose Obama's decision not to escalate militarily in Syria. Notwithstanding Obama's decision in November, it looks increasingly like Obama and his new secretary of state, if only to keep a controlling hand over the opposition, are being pushed from behind in that direction.

The default option for many in Washington and elsewhere remains a military victory against the regime, one that’s Kerry's spokesperson herself has declared “inevitable” — one of the most dangerous words to use in foreign affairs.

The most charitable explanation for recent US policy moves is the most sensible one — that the US is trying, in Kerry words, to change Assad’s calculations to move the momentum towards dialogue.

Too bad that the hoped-for outcome is also the least likely. Rather than facilitate diplomatic progress, which the US is on record supporting, growing US support for escalating the conflict will feed the far-fetched hopes of those seeking a military victory against Assad and a sectarian victory against Iran and Hezbollah ... and result not in victory but in a never-ending war of militias that could mark the end of Syria's post-World War II history of independence and sovereignty.