Israel fears that a jihadist victory in Syria could mean the Hashemite Kingdom of Jordan is next, writes Alon Ben David. 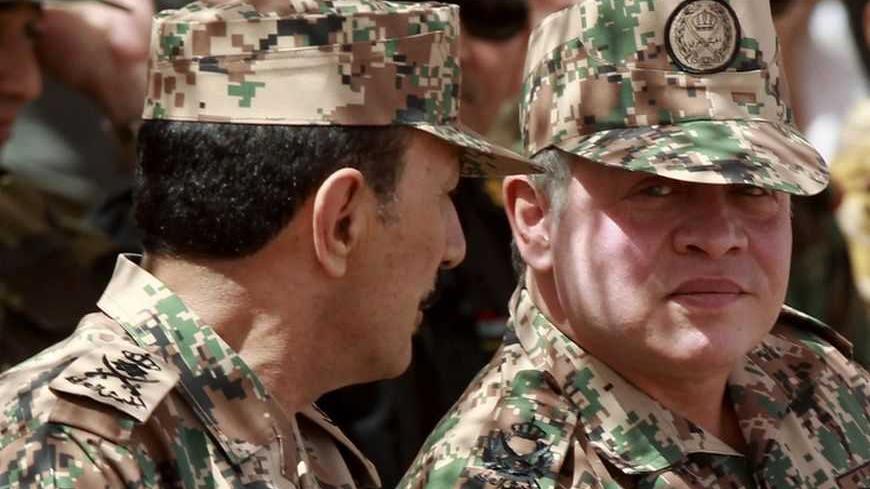 The kingdom of Jordan — the last strategic buttress that Israel still has in the Middle East — has so far managed to maintain its stability amid the wave of revolutions sweeping the region. Yet, successful as King Abdullah II of Jordan may have been in forestalling unrest that could threaten his reign, Jihad elements currently fighting in Syria have already marked him as their next target — following Syrian President Bashar Assad. The collapse of King Abdullah II’s regime would in all probability pose the most significant threat to the security of Israel. However, the Israeli public seems to be in effect oblivious of and indifferent to the goings-on in the country neighboring Israel on the east. At the same time, official Israel is keeping mum about its contacts with the Hashemite Kingdom of Jordan.

The day after the citizens of Israel had cast their ballots in parliamentary election, their Jordanian neighbors on the east cast their votes in an election Jan. 23 constituting a small step forward in the reform plan of King Abdullah II, which is designed to turn Jordan, gradually and carefully, into a parliamentary democracy. The Muslim Brotherhood movement in Jordan called for a boycott of the election. And although the results reflected the continued hegemony of the tribes loyal to the regime, Islamist candidates that are not associated with the Muslim Brotherhood managed to garner 25% of the seats in parliament.

It appears that even the opposition elements in Jordan, watching the violence raging in the surrounding Middle Eastern countries, have opted for a peaceful change of regime rather than its dissolution by revolution. All the same, while the king is trying to cope with the opposition that has evolved among the tribes traditionally loyal to him, fears are growing that the instability on the outside will seep into Jordan and shake it from within. It is estimated that thus far, more than 300,000 refugees from Syria have fled to Jordan and that the flow of asylum seekers will increase still further: 36,000 of them found refuge in Jordan in January alone. The growing influx of refugees from Syria is liable to change the demographic balance in the kingdom (whose population currently numbers 6.2 million) and to facilitate the entry of Jihadist elements that would threaten the stability of the regime.

Over the last decade, Jordan scored quite a few successes in its endeavor to block the entry of Jihadist terrorists from Iraq and Syria. In most cases, Jordan also managed to foil the plans of those terrorists who had penetrated the country. Thus, for instance, it thwarted the plans by an al-Qaeda cell to launch a chemical terror attack back in 2005, and more recently, it detained 11 Jordanians who entered the country last October from Syria carrying explosives intended for use against Western targets in the kingdom. Be that as it may, the ever growing number of Jihad activists who poured into Syria in the past two years and their free access to the wealth of weapons left behind by the retreating Syrian army present Jordan with a new threat, on a totally different order of magnitude.

As far back as the civil war in Iraq, the Jihadists put the Hashemite Kingdom in the crosshairs as a preferred target for attack. In 2005, terrorists who infiltrated into Jordan from Iraq killed 60 people in a terror attack on hotels in Amman. However, at the time, Jordan was but one of a range of targets of the organizations associated with al-Qaeda, while recently it has been marked by the Jihad organizations as their next target for attack. It clearly emerges from Jihadist discourse on social networks that the terrorist cells currently engaged in battle against Assad plan to turn south to Jordan once they overthrow the Syrian president. And after toppling the Hashemite regime, they would be free to open war against the Jews in Israel.

It should be noted that it isn’t only the Sunni Jihadists who threaten the Jordanian kingdom. The Iranian Revolutionary Guards and Hezbollah militants deployed in Syria in vast numbers are also liable to flow into Jordan. Not to mention the approximately half a million Palestinian refugees living in Syria who could fundamentally change the demographic balance between the tribes of Trans-Jordan and the Palestinians in the kingdom. If this sizzling dish is spiced up by chemical seasoning derived from the non-conventional arsenal of Assad, the result is bound to be a highly volatile recipe.

In the last few months, the Jordanian king reinforced his forces along the Syrian border in an attempt to prevent the infiltration of undesirable elements — apparently with considerable success. For years, the Hashemite kingdom served as the eastern security border of Israel and as a buffer between Israel and the Sunni and Shiite terror elements in Iraq. However, under the present circumstances, it's hard to tell whether the stability of past years will be maintained. Indeed, Israel has already started to plan a security barrier the length of its long border with Jordan.

As always, Israel hopes to see King of Jordan Abdullah II reigning over his country for many years to come. At the same time, it is realized that in the wake of Mubarak and Ben-Ali, Gadhafi and Assad, no Arab leader is impervious to the regional upheavals, even though he may be considered a descendant of Prophet Muhammad himself.

Alon Ben David is an Israeli television and print journalist, currently senior defense correspondent for Israel's Channel 10. He has been covering Israeli military affairs for more than 25 years for Israeli and international media outlets. He is currently senior defense correspondent for Israel Channel 10 and Middle East correspondent for Aviation Week. Ben David holds a BA in political science from Tel Aviv University and a master’s in public administration from Harvard University. He is a senior research fellow at the Center for International Communication at Bar-Ilan University. He frequently lectures throughout the world on topics relating to the Middle East.