Turkey has 'other priorities' than battling Islamic State

US Director of National Intelligence James Clapper does not expect Turkey to become "more engaged" in the anti-Islamic State coalition; are al-Qaeda and the Islamic State, or Assad and Hezbollah, a greater threat to Israel?; Israeli prime minister expects to "cash in" on Iran nuclear deal on March 17; Al-Monitor launches a series focused on women in the Middle East. 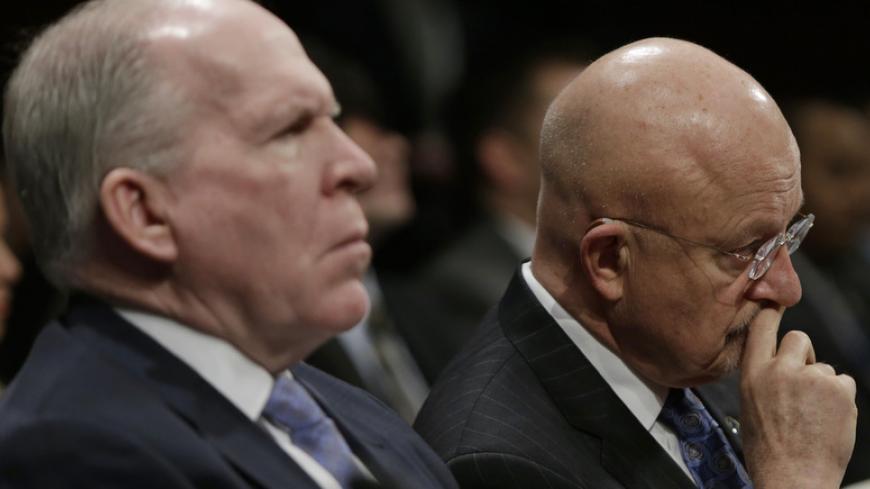 Turkey has "other priorities"

Asked during testimony before the Senate Armed Services Committee on Feb. 27 if he was optimistic that Turkey would become “more engaged” in the fight against the Islamic State (IS), US Director of National Intelligence James R. Clapper replied, “No, I’m not. I think Turkey has other priorities and other interests.”

Clapper’s candor, which is reminiscent of Vice President Joe Biden’s "slip" on Oct. 3 that "our biggest problem is our allies" in dealing with foreign fighters in Syria, put the spokespeople at the departments of Defense and State on defense. Asked about Clapper’s remarks, they responded with the usual bromides about Turkey as a "NATO ally” and an “important partner” in the Middle East.

The latest evidence of differing US and Turkish priorities is Turkey’s agreement on Feb. 19 to "train and equip" vetted Syrian rebel forces. The agreement took months to negotiate in part because of Turkey’s insistence that the rebels should be trained to fight the Syrian government, in addition to IS.

And Turkey believes it got what it wanted in the deal last week. Turkish Foreign Minister Mevlut Cavusoglu said on Feb. 23 that he expects that these rebel groups will also fight the Syrian government.

The Pentagon, however, had a different take. In response to a question about the US obligation to opposition forces if they took on the Syrian government, spokesman Rear Adm. John Kirby said on Feb. 27 that “the goal for this program is to get them [Syrian opposition forces] to do those two things: to defend their communities, protect their own neighbors, and then go on the offense against [IS]. The Syria component of this campaign is an anti-[IS] component. That's the focus, not about the [Bashar al-]Assad regime. [N]othing has changed about … the policy that there's not going to be a US military solution to Assad.”

Semih Idiz writes from Turkey: “Whatever its merits or demerits, signing the agreement to train and equip moderate members of the Syrian opposition, and then claiming this also targets the Syrian regime — when that is not the intention of the US-led coalition — only reinforces the impression that the government’s Syrian policies, not to mention policies on other regional issues, are in a daze.”

Fehim Tastekin broke the story for Al-Monitor in October 2014 that the pending US-Turkish agreement on "train and equip" would be managed by Turkey’s National Intelligence Organization (MIT), which has been focused on deposing Syrian President Assad, and could give priority to training Syrian Turkmen forces.

Another sign of the impression of a "daze" in Turkey’s Syria policy occurred when a column of dozens of armored vehicles and hundreds of Turkish soldiers entered Syria on Feb. 22 to evacuate 38 Turkish soldiers and the remains of the Tomb of Suleiman Shah. The tomb is recognized as Turkish territory despite being inside Syria.

Despite the martial bravado of the Recep Tayyip Erdogan government, Cengiz Candar writes: “The Turkish military operation is being treated as a matter of indignation or military farce rather than the stunning military success that the government had hoped it would be.”

There was a touch of irony in that the People's Protection Units (YPG) — the armed branch of the Kurdistan Democratic Union Party (PYD) — helped secure passage for the Turkish column during the operation. It was not long ago that Turkey resisted assistance to Syrian Kurds when they were under attack by IS in Kobani.

Kadri Gursel reports: “History’s joke to Erdogan and his party lies here: Without the joint struggle of the United States and its new regional ally, the PYD, which ousted IS from Kobani, the Turkish tanks would have had no safe route to go and evacuate the tomb.”

Candar cautions that the tomb operation should not be considered a gesture to the PYD and its Turkish affiliate, the Kurdistan Workers Party. To the contrary, he writes that the decision to relocate the tomb just across the Turkish border in Syrian Kurdish territory might be better understood as a “‘strategic’ move to prevent the Kobani canton of the PYD from linking with the Afrin canton farther west to provide a geographic continuity for eventual Kurdish self-rule.”

Israel should give up "illusions" in Syria

Jacky Hugi writes that Israel’s support for Syrian rebels may be a slippery slope, empowering radical jihadists who are more of a threat to Israel than the Syrian government and Hezbollah:

“As far as Israel is concerned, experience teaches that the Shiite-Alawite camp is led by pragmatic individuals. While they may be motivated by the urge to attack Israel and shed its blood, this is not the result of some bloodthirstiness or messianic religious fervor, as it is with the various Sunni extremist factions. Yes, Damascus is Jerusalem’s traditional enemy, but it also knew how to keep the border quiet for four decades. Even in the numerous instances when Bashar al-Assad was allegedly attacked by the IDF (some of these instances according to foreign news sources), Assad was reluctant to respond, so as not to open up a front with Israel. With the Middle East experiencing a rising tide of fundamentalism, it is better to face a secular rather than a religious enemy.

"We should stop with the illusions: the day 'after Assad' won't bring about a secular liberal ruling alternative. The extremist organizations are the most dominant factions in Syria nowadays. Any void left in Syria will be seized by them, not the moderate rebels. This is what happened in Iraq and Libya. This is what will happen in any other arena in the region.

"Israel has a bitter score to settle with Hezbollah, too, but at least it is a disciplined movement whose word counts for something, and which has a single loyalty. It is a group that can be spoken to (through mediators, of course). Its policies include avoiding attacks on enemy civilians, except in extreme circumstances, or when there is a need to reciprocate in kind. Its fighters do not behead anyone, nor do they set their prisoners on fire. When it wants to attack Syria or Hezbollah, Israel has an address to turn to. The same cannot be said about the Sunni extremist organizations. With them, it’s hard to tell who's pulling the strings from a distance today, and who will be pulling the strings tomorrow. A retaliatory operation against them can sometimes resemble chasing after the ghosts of yesterday.”

Will Netanyahu "cash in" on Iran?

Akiva Eldar reports from Jerusalem that Israeli Prime Minister Benjamin Netanyahu anticipates a political win-win in the March 17 Israeli elections by challenging the Barack Obama administration over a possible nuclear deal with Iran.

“If the P5+1 and Iran are on their way to an agreement, which has been called a “bad agreement” by most Israeli politicians on the right, left and center, then the people need a strong and experienced leader like Bibi. Only he can stop the Iranians by recklessly brushing aside a naive American president. In an emergency, the Likud propagandists will argue, Israel cannot afford a new prime minister, one who believes the Arabs and is afraid of the Americans.

"Even if negotiations with Iran are headed for a dead end, Netanyahu will cash in. One flight to Congress by Super-Bibi, over the objections of the president, derailed a bad agreement, his advisers will bellow. The Likud campaign commercials will say that thanks to Netanyahu, sanctions on Iran will be increased and the way paved for Israel to act on its own against the enemy’s nuclear installations. Doesn’t the man who twisted the arms of the world powers deserve another term?”

Women in the Middle East

Beginning this week, Al-Monitor will launch a special series focused on women in the Middle East. While so many stories focus on the challenges facing women, Al-Monitor’s series will highlight the leadership and accomplishments of Middle East women leaders in many fields, including diplomacy, the arts and journalism. Our writers from across the region have contributed to this series, which will be published in Arabic, English, Hebrew, Persian and Turkish. The series will include profiles of Al-Monitor correspondents and analysts, as well as interviews with H.E. Alya al-Thani, Qatar’s permanent representative to the United Nations, and H.E. Dina Kawar, Jordan’s permanent representative to the UN, in addition to on-the-ground reports and analysis from the region.