The US national intelligence director, James Clapper, foresees a rise in "political uncertainty and violence" in the Middle East in 2014. 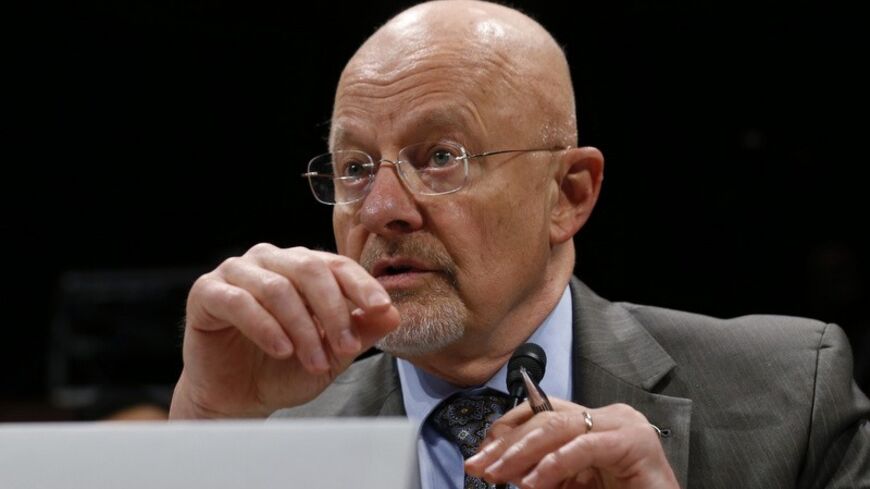 US Director of National Intelligence James Clapper is pictured at a House Intelligence Committee hearing on Capitol Hill in Washington, Oct. 29, 2013. - REUTERS/Jason Reed

As the Geneva II talks on Syria staggered to an uneventful close, US Director of National Intelligence James Clapper this week presented a stark assessment of the terrorist threat in the Middle East in his annual “Worldwide Threat Assessment of the US Intelligence Community” before the Senate Select Committee on Intelligence.

“Political uncertainty and violence will probably increase in the region in 2014,” Clapper’s statement read, adding that the war in Syria has “created opportunities for extremist groups to find ungoverned spaces from where they can try to destabilize new governments and prepare attacks against Western interests.”

In other words, the terrorist threat to the region is going from bad to worse, thanks in large part to the war in Syria. Intelligence and terrorism expert Bruce Riedel writes for Al-Monitor that Israel is increasingly surrounded by al-Qaeda and its affiliates, and that “the growth of al-Qaeda franchises and al-Qaedism in the neighborhood is the result of the Arab Awakening and the chaos it has produced, not some al-Qaeda master plan.”

So much for the promise of the once-hyped Arab Spring, the failed assumptions of which still seem to affect US-Syria policy.

Even though there is no sign that Syrian President Bashar al-Assad is on his way out, through either the Geneva II negotiations or a military defeat, the Obama administration is struggling — so far without success — to thread the needle on addressing the rise of Syria-based terrorism in the Middle East and keeping the heat on Assad to leave.

This approach led to US President Barack Obama saying in his State of the Union address that “in Syria, we’ll support the opposition that rejects the agenda of terrorist networks.”

The United States — which is sending arms to "vetted" armed Syrian opposition forces — also appears to be ramping up efforts to rebrand these groups as a counterterrorist force, with the expectation they could actually hold their own against Jabhat al-Nusra, the Islamic State of Iraq and al-Sham (ISIS) and the Syrian government, against whom they have been losing ground.

It is worth taking a look at the US experience in Iraq and Afghanistan, countries with actual military institutions. The Iraqi army, rebuilt and trained by the US military over the past decade, is losing Anbar province and cannot protect its capital city from al-Qaeda terrorists. The Afghan army struggles on its own against Taliban insurgents.

The myth of a counterterrorism policy rooted in Syrian opposition forces, created out of whole cloth over the past three years, would, in the end, be the worst of all worlds: the continuation of the war and refugee flows and the expansion of those “ungoverned spaces” that contribute to the proliferation of terrorist groups, as Clapper testified to the US Congress.

The Obama administration need not give up its political and military support of the Syrian opposition, but it should consider three options as part of a reset in US-Syria policy to address the threat of the rise of al-Qaeda and affiliated groups in the Middle East.

First, it is time to engage Iran on Syria. Both countries share an enemy in al-Qaeda advances, including in Iraq, Syria and Afghanistan. The US position that Iran must endorse the Geneva communique in chapter and verse serves only to stymie the prospects for a political solution, as there will be no solution without Iran’s buy-in. The United States does not mind venturing from the letter of the Geneva communique by declaring that Assad cannot be part of the transition in Syria, so Iran might get some leeway as well, given its support for a political solution and its influence with Assad.

Second, and related, the United States should encourage Turkey and Saudi Arabia to build bridges to Iran over Syria. Turkey is rethinking its Syria policy because of the threat from terrorists, as this column described last week. Ali Hashem reports that Syria was the topic of closed-door talks during Turkish Prime Minister Recep Tayyip Erdogan’s visit to Iran this week, and this is to the good, but there is even more Turkey can do in terms of regional diplomacy.

Clapper’s statement referenced Syria as a “proxy war” between Iran and Hezbollah on the one hand, and “Sunni Arab states” on the other. The United States should support Saudi Arabia and Iran in talking about confidence-building measures to address regional security and the threat from al-Qaeda.

Third, Assad’s leaving should be recast as a US preference, not a demand. There is no sign he is going. It is understandable that the United States might keep up that line heading into Geneva II to buck up the opposition and its regional allies, and it has been US policy since Obama first called for Assad to “step aside” in August 2011.

The political transition should complement steps toward a cease-fire, not contribute to entrenchment by any of the parties. In an exclusive interview with Al-Monitor, Syrian Foreign Minister Walid Moallem called for a "national unity government" to include representatives from opposition groups. This proposal should be considered in the context of the Geneva II framework as a possible bid to gain some needed traction in the transition talks.

The United States should have some faith in a Syria-led process, as called for in the Geneva communique, and in the idea that the Syrian people will deal with Assad on their terms and in their time, including matters of transitional justice, accountability for war crimes and violations of human rights.

The priority for US diplomacy in Syria for now, however, should be to stop the war and build regional alliances against al-Qaeda terrorist networks. The open secret is that both objectives require dealing with Assad, as Frank Wisner and Leslie Gelb write this week, and as Ryan Crocker wrote in December. The recent experiences in Iraq, Afghanistan, Egypt and Libya should be lessons that dealing with the Middle East is the realm of “least-worst” options — unintended negative consequences and of gray, not black and white. The terrorist groups that gain in Syria are the inheritors of those who flew airplanes into the towers of the World Trade Center and the Pentagon on 9/11, and are today blowing apart Iraq. They are on the rise, according to the latest US threat assessment, and US-Syria policy should adjust to make confronting those terrorists a priority.