Israel should back Assad

Based on past experience and years of calm borders with Syria, Israel must abandon whatever ties it develops with Syrian rebels and work with its Western allies to stabilize President Bashar al-Assad's regime. 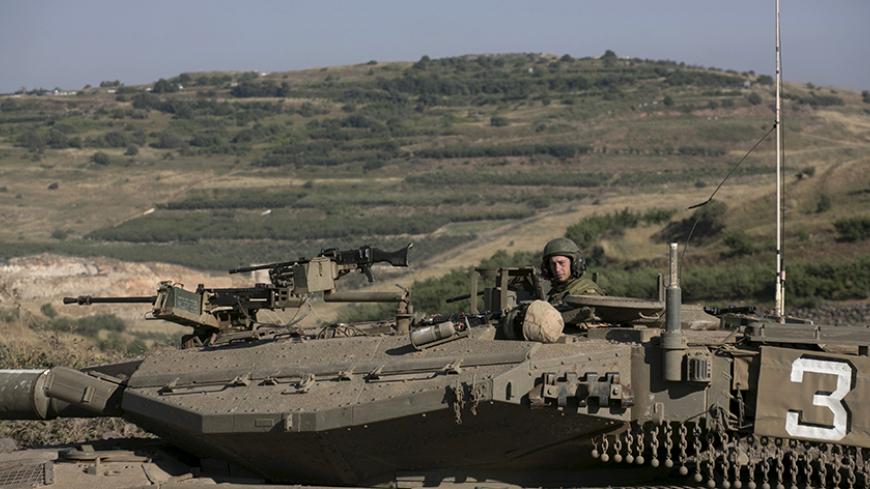 An Israeli soldier rides in a tank on the Israeli side of the border fence between Syria and the Israeli-occupied Golan Heights near the Druze village of Majdal Shams, June 16, 2015. - REUTERS/Baz Ratner

On June 23, Druze residents attacked two injured Syrian rebels who were transferred by an Israel Defense Forces (IDF) ambulance from the border to an Israeli hospital. This lynching in the Druze Majdal Shams village in the Golan Heights is a warning bell not just for Israel, but for all the players in the region. The Druze problem has brought to the surface, at least implicitly, the network of inter-ethnic hostilities and tensions on Israel’s border. If the regime in Damascus collapses or abandons this border region to the goodwill of Sunni factions, we can safely assume that the relative stability and quiet there will end as well. The pent-up tension in the border region would explode.

What Israel should learn from these events is that it must strive for the survival and bolstering of the current regime at any price. Anyone who wonders why is invited to look at neighboring Iraq or distant Libya. What’s happening there is likely to happen in Syria after President Bashar al-Assad.

The Baath regime was cruel to its citizens and robbed them of basic rights, and its leaders should pay the fullest price so that justice is served. But in choosing between one bad thing and another, the balance tips toward the regime. The Israeli security establishment should gradually abandon its emerging alliance with the Syrian rebels and elegantly work with its friends in the West to stabilize Damascus as much as possible. It must not fortify the regime’s enemies, develop friendly relations with them nor weaken its rule. The bitter consequences of this tactic could hit Jerusalem like a boomerang.

The survival of the Damascus regime guarantees stability on Israel’s northern border, and it’s a keystone to its national security. The Syrian regime is secular, tacitly recognizes Israel’s right to exist and does not crave death. It does not have messianic religious beliefs and does not aim to establish an Islamic caliphate in the area it controls. Since Syria is a sovereign nation, there is an array of means of putting pressure on it in case of conflict or crisis. It’s possible to transmit diplomatic messages, to work against it in international arenas or to damage its regional interests. If there’s a need for military action against it, there’s no need to desperately look for it amid a civilian population and risk killing innocent civilians.

Israel has experienced years of a stable border with the Syrian regime. Until the war broke out there, not a single shot was fired from Syria. While Assad shifted aggression toward Israel to the Lebanese border by means of Hezbollah, even this movement and its military arm is preferable to Israel over al-Qaeda and its like. It’s familiar and its leaders are familiar. Israel has “talked” through mediators with Hezbollah ever since the movement controlled southern Lebanon. It’s mostly indirect dialogue, meant to serve practical interests of the kind forced on those who have to live side by side, but pragmatism guides it. While Hezbollah fighters are indeed bitter enemies, you will not find among them the joy in evil and cannibalism, as seen in the last decade among Sunni jihadist organizations.

In contrast, it is a dangerous, irresponsible gamble to choose Assad’s enemies and encourage his collapse — it would be playing with fire. The prominent elements among Israel’s potential future neighbors are mainly Jabhat al-Nusra, al-Qaeda’s branch in Syria, or the Islamic State, whose fighters aim to advance to southern Syria but have been blocked so far. Among the rebels are also non-jihadist groups. They may want good neighborly relations with Israel, but it might be that they don’t. These are ad-hoc militias whose purpose is not clear and who are subject to influence or occupation by forces stronger than they are.

Even if at the outset these groups would cultivate cordial relations with the IDF, this is no guarantee for the future. They might split one day, as happened with the PLO, and one branch would start to show hostility toward Israel. Tomorrow they might switch allegiances or policies. Israel’s history knows these scenarios well.

More than four years have passed since war broke out in Syria, and Israel still hasn’t formed a decisive position regarding what’s good for it and what’s not. In the war’s first year, Israeli politicians followed the international herd and called for the removal of Assad. Afterward, they suddenly understood that if he falls, extremist sects could take his place. Since then, the Israeli position has lacked direction. There are those in the security establishment who believe that Assad’s fall would weaken the Shiite-Alawi camp and thus benefit Israel. Others believe that his ouster would lead to chaos, which would adversely affect Israel. Israeli security officials who spoke to Al-Monitor on condition of anonymity admit that to this day, there has been no in-depth, multibranch discussion within the security establishment that has concluded with a clear, authoritative position on this issue. Anyone who tries to ask officials in the highest ranks of Israel’s diplomatic-security establishment what they think the preferred scenario would be regarding the fate of Damascus encounters unsatisfying, sometimes confused responses.

The West has also taken an erratic stance regarding the future of Syria. There are leaders who call for the downfall of the regime, and there are those who “would be satisfied” with an agreement that would see only the removal of Assad. There are those who keep quiet, and there are those who are operational partners behind the scenes, aiming to weaken him, especially in the first years of the uprising. But none of them has the right to be a partner in determining the future of Syria. The Americans and British are the ones who ousted Saddam Hussein and helped turn Iraq into a bloody battleground. France, under former President Nicolas Sarkozy, was the one who pushed the UN Security Council to call for a military operation in Libya, which has torn it apart. The West has yet to be called to account for its responsibility for the deaths of so many people.

In three decades of conflict with nonstate organizations, like Hezbollah and Hamas, Israel has demonstrated only mediocre ability to handle them. It can’t blame anyone but itself, since most of them were established under the nose of the IDF and in areas under its control. Israel tried to exterminate these organizations but failed every time and even enabled them to grow stronger. Sometimes this policy has been accompanied by unfortunate mistakes. In Gaza in the 1980s, the IDF groomed the Islamic associations as a counterweight to Fatah. Hamas grew out of these associations and has since demolished Fatah in a bloody military revolution.

Even as Israel is today embroiled in its rivalry with Hezbollah, Syria and Iran, it doesn’t see that from within them a new enemy is rising, dangerous and unknown. A third front on the Golan Heights, where a new organization or nonstate entity would flourish in the spirit of the Sunni rebel organizations, will not breed a friend for Israel or an alternative to the stable Baath regime. It would produce, slowly and surely, a new threat.