What does it mean to be a modern Zionist?

The term "Zionism" has been used and abused by Israeli politicians for decades, especially before election time, so perhaps a new civic perspective on the concept is in order. 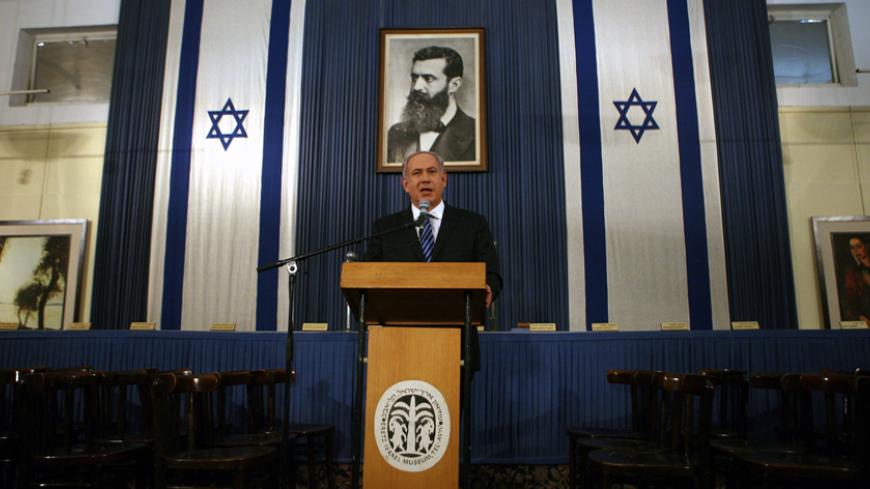 Israel's Prime Minister Benjamin Netanyahu speaks to the media while standing in front of a portrait of Theodor Herzl, the father of modern Zionism, during a visit to the Independence Hall in Tel Aviv, Oct. 14, 2010. - REUTERS/Lior Mizrahi

The 2015 elections will go down in Israeli history as the most “Zionist” in the annals of the state. The choice by Labor Chair Isaac Herzog and Hatnua Chair Tzipi Livni to call their joint Knesset list the Zionist Camp set off a race against the right wing for the title of state Zionism champion. The right camp dug up past remarks by members of the Zionist Camp that it claimed call into question the list’s Zionist bona fides. Voices from the Likud pounced on the fact that an Arab journalist, Zuhair Bahloul, had done well in the party primaries, seemingly ensuring himself a real chance at being elected to the Knesset on the Zionist Camp slate. They wondered aloud how a party dare take the “Z” word in vain, when on Independence Day of the Jewish state, one of its members cannot even sing the national anthem, which invokes the Jewish soul yearning for Zion.

On the other hand, the name Zionist Camp, which like many phenomena in Israel began as temporary and became permanent, started a debate on the left about the essence of Zionism and its contribution to Israeli society. One of the leaders of this pointed debate is Labor’s Avraham "Avrum" Burg, a former Jewish Agency chairman, one-time Knesset speaker and son of the late Yosef Burg, a founding father of the National Religious Party. In a Jan. 8 article in Haaretz, Burg asserted that the role of the Zionist movement had ended with the establishment of Israel and was supposed to have been succeeded and replaced by “Israelism” — an existence based on equality among citizens that would ensure a legitimate future for the Jewish people. Burg, who joined the Jewish-Arab Hadash Party on the eve of its becoming part of the joint slate of Arab parties, proposes the Israelism model as a remedy for the severe injustice Zionism has visited on the Palestinians. “Why do we need the Zionist definition?” he asks, and answers, “Unless we want to perpetuate the injustice and deprivation in the name of an ideology that has successfully achieved its goal and is past its expiration date.”

Shalom "Shuli" Dichter — who has in recent years been running a nongovernmental organization (NGO) called Hand in Hand, which promotes bilingual, Jewish-Arab education, and who served for a decade as co-CEO of Sikkuy, an NGO for the advancement of civic equality — refuses to take his leave of Zionism. In a talk with Al-Monitor, the Maanit Kibbutz member objected to the idea that Zionism is only the “scaffolding for construction of the state.” In his view, even before the state was established, the Zionist movement had failed to adopt the correct approach toward building the national Jewish home in the land of Israel.

The scaffolding approach, Dichter believes, provided legitimization for Zionism’s separatist and abusive ways right from the start. “The wheel of history cannot be turned back,” he said. “Even if bidding farewell to Zionism and looking ahead, while removing responsibility for the past, redeems you, as an individual, from the pangs of guilt, it does not provide a political solution. Erasing the Zionist branding from my forehead does not erase the injustice. It only helps ignore it.” Dichter's Zionism, contrary to prevailing Israeli perceptions of it, includes assuming responsibility for the injustices and crushing of the Palestinian people.

Dichter criticizes his many friends who feel that by declaring themselves “non-Zionists” or anti-Zionists, they have shaken off the collective Israeli burden of blame and responsibility. “Not one of our friends who ‘wised up’ to Zionism gave up the privileges bestowed on him as a Jew in this land,” the veteran coexistence activist lashed out. “Becoming a non-Zionist won't turn the city of Netanya [for instance] into a multicultural or binational city, with Arabs on the city council, inheriting plots of land from their parents and commemorating the Nakba at the veterans’ center. So what good is your non-Zionism? But if the Zionism around you is different, Netanya could then look a lot more like our civic vision.”

In his new book “On Tensions and Good Intentions,” Dichter suggests a model of equality between Arabs and Jews, without renunciation of the Jewish people’s right to live as a collective in the land of Israel. “Ideology and faith play a central role in people’s lives, including those of the Jews,” Dichter explains. His solution, which he calls “civic Zionism,” seeks to found a new society, shared and equal, that contains the weight of the past while preserving the collective belonging of the Jewish nation.

“I suggest that Jews not abandon the Zionist ideology, but rather the Zionist praxis at the heart of which lies the Jewish hegemony over the State of Israel. It’s enough that I bear the disastrous results of the fulfillment of Zionism and that I have to atone for the injustice it caused. Why should I give up Zionism itself, meaning my right and basic human need to live here as a collective?” Dichter asks.

Shared civic life with equality for the Palestinians is, in his view, the most correct form of Zionism's realization. This equality has to include a renewed and equal distribution of material resources. This redistribution must encompass “state lands,” including Palestinian lands taken over by kibbutzim. Dichter does not cut his own kibbutz any slack. Any fulfillment of Zionism that preserves an advantage or control for Jewish citizens over Palestinian citizens would be considered, he believes, a sin against Zionism.

Dichter also suggests a possible change to the state’s symbols so that Palestinian citizens can identify with them as well. In his view, civic Zionism is the alternative to the religious Zionism that has turned messianic, to the nationalistic Zionism that ignores those who are not Jews, the military Zionism that perpetuates eternal life on one’s sword and the land-based Zionism that disinherits people of their land and of the state’s resources.

A setup where after the elections the Arab Knesset faction operates as an adversarial bloc in the face of a massive nationalist-religious Jewish bloc does not augur well for Dichter’s vision. He warns that this could hasten and radicalize the polarization that already exists between the two national groups. On the day after the elections, he said, public-political measures must be adopted to reshape the discourse between Jews and Arabs, so that relations and cooperation be restored. As Israel’s first president, Chaim Weizmann, said, history will judge the State of Israel by its attitude toward the Arab citizenry. It will not remember who shouted loudest “I am more Zionist.”