The resolution handed down recently by the Jerusalem District Court demonstrates the true ramifications of the nationality law and how Jews would be favored in courts. 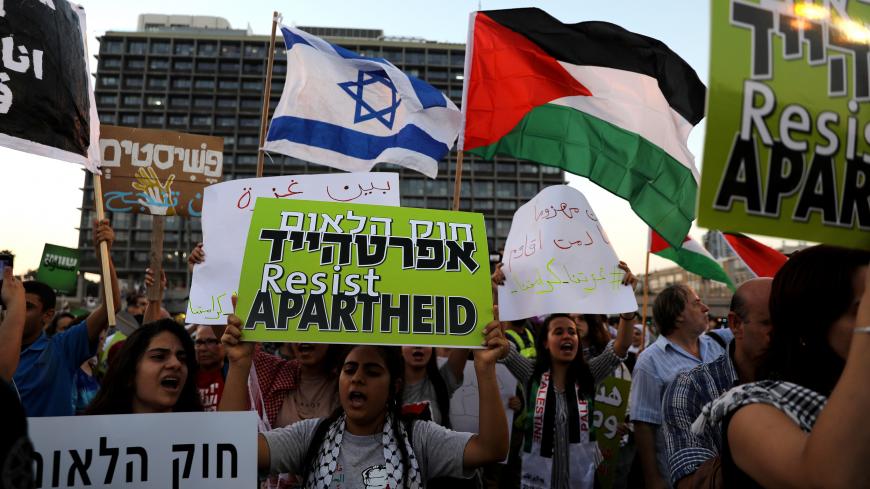 The Knesset adopted the controversial nationality law on July 19, anchoring the Jewish nature of the State of Israel. In response to the public uproar in Israel and around the world following the passage of the law in the Knesset, its authors and supporters have claimed that it does not change the current reality and does not hurt the equal rights of minorities. Prime Minister Benjamin Netanyahu surpassed himself and, as his custom, attacked the left and demanded that it check itself. In his opening remarks at the Cabinet meeting following the passage of the law on July 29, Netanyahu said: “Does determining that our flag bears the Star of David somehow abrogate the individual right of anyone among Israel's citizens? Nonsense, but determining this ensures that there will not be another flag. Does determining that Hatikvah is our national anthem detract from the personal rights of any person in Israel? Nonsense, but it does determine that there will not be another anthem. … We are not ashamed of Zionism. We are proud of our state, that it is a national home for the Jewish people, which strictly upholds — in a manner that is without peer — the individual rights of all its citizens.’’

The plaintiff, David Mashiach, was a witness in 1998 to a terror attack in Tel Aviv and suffered shock. Later he was diagnosed as suffering from post-traumatic stress disorder, which impacted his everyday functioning. In 2007, he and his family submitted a claim for compensation from Hamas, which carried out the attack.

In the verdict, decided Sept. 17 against Hamas, Drori analyzed, among other things, the question of punitive damages and noted the addition of the nationality law to the Israeli law book and Clause 6a in particular: “The state will strive to ensure the safety of the members of the Jewish people in trouble or in captivity due to the fact of their Judaism or their citizenship.”

The judge wondered how this clause could be interpreted and how it could contribute to the verdict regarding punitive damages. He also took into account the charter of Hamas and its clauses against Jews and the Jewish state, writing: “According to the written formulation … of the Hamas charter, and no less, as it acts in practice, one can say, without exaggeration, that the Jewish people, all the more so when they are in Israel, are among those who are in trouble because of their Judaism.”

He further wrote, “I am aware that the said basic [nationality] law was legislated only two months ago, while the attack happened 20 years ago. However, a Supreme Court decision has determined, and repeatedly determined, that basic laws have interpretive application also on laws that preceded them.”

To his critics, who he anticipated would object to his verdict, he asked as well as answered: “Is the Basic Law: Israel - The Nation-State of the Jewish People, merely declarative? I don’t believe so. It is surely assumed that the Knesset, as the legislative branch, when it produced a basic law, intended that it may be used in the courts … thus, as the injured party is one of the 'Jewish people [or one of its] citizens who are in trouble because of their Judaism or their citizenship,' the scale will tip toward punitive damages, among other things, by force of the Nationality Law.”

Even if the authors of the nationality law, such as member of Knesset Avi Dichter and Netanyahu, and its supporters insistently claim that it does not encourage discrimination, it seems they hadn’t imagined that it would so quickly make its way to the judicial system in Israel and would define in the clearest way that Jews and Arabs are not equal before the law.

“The worst is still ahead, but there’s no doubt that it will help in our public relations against the nationality law,” said Knesset member Ahmad Tibi, of the Joint List, to Al-Monitor. Members of his party have already started an international campaign to enlist opponents to the law that they define as racist. “There’s no doubt that this is a racist verdict and explanation from a racist judge with a history that stains him with racism,” said Tibi. As he sees it, the use Judge Drori made of the nationality law proves the arguments of Arab members of Knesset and the Arab public in general “that it’s a racist law that paves the road to apartheid, which [Justice Minister Ayelet] Shaked’s judges could in the future use as legal precedent.”

While Shaked is not responsible for the appointment of Drori, who was appointed in 2001 to the district court in Jerusalem, the minister does see this court, where Drori serves as vice president, as a safe place to bring cases related to Jewish-Arab relations. Shaked initiated a bill adopted by the Knesset this July that transfers the jurisdiction of the Supreme Court to debate [Palestinian] petitions regarding administrative decisions in the West Bank to the district court in Jerusalem, where it is allegedly easier to rule in favor of Jews.

Indeed, last month on Aug. 28, a controversial verdict was handed down by Judge Arnon Darel according to which an illegal outpost on private Palestinian land may be recognized [legalized by Israeli authorities] if it can be proven that the territory was allocated [to settlers] in good faith.

Drori’s verdict, which grants legal preference to Jews, is not the only verdict for which he has been called “racist.” In 2009, he was a candidate for a Supreme Court nomination. But leading up to the meeting of the committee to nominate judges, dozens of angry messages regarding his candidacy arrived at the office of then Supreme Court President Dorit Beinisch. It turned out that in 2006, Drori heard a case of an ultra-Orthodox man who ran over a cashier who was a new immigrant from Ethiopia. The yeshiva student left a shop without paying, and when the cashier stood in front of his car in an attempt to prevent him from fleeing, he struck her. Drori, a religious Jew, decided to acquit the yeshiva student out of concern that a criminal conviction would hurt his hopes to be appointed to a religious court judgeship. He even determined that the case actually benefitted the injured woman, since thanks to the event she finally “integrated into Israeli society.” This verdict turned out to be an obstacle for him, and his candidacy for the Supreme Court was withdrawn.

Now the district court in Jerusalem has become a “Supreme Court bypass,” and Drori has proven that you don’t have to be a Supreme Court justice to grant legal certification to the nationality law and determine in unequivocal language that Israel grants legal preference to Jews by virtue of their Jewishness.