Israel's progressive Zionist voters who are both religious and tolerant have no real political home these days. 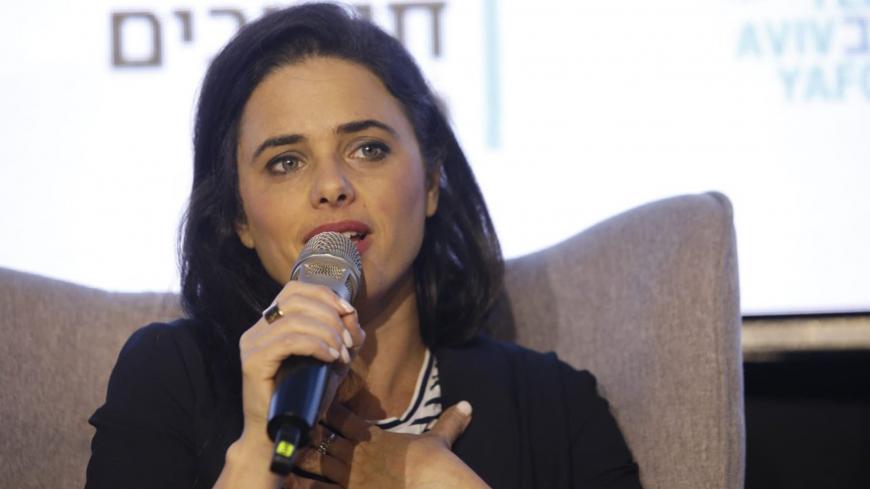 Ayelet Shaked, leader of the United Right, speaks at a conference in this image posted Mar. 28, 2019. - Twitter/@Ayelet__Shaked

What awaits, say, a young humanist religious Zionist who is revolted by racism as he stands in the privacy of his neighborhood ballot box on Sept. 17? Which Zionist party represents his religious and universal values? After all, his own brand of Zionism is alien to that of the two ultra-Orthodox parties, Shas and Yahadut HaTorah. The newly minted leftist Democratic Camp does not speak to his Jewish values, and the alliance on the political right features Rabbi Rafi Peretz, a self-declared homophobe. For that party, as for the Likud, territorial compromise is akin to worshiping idols.

Until the 1984 elections, our guy could have voted for the National Religious Party led at the time by Yosef Burg. Burg’s grandson, Hillel Ben-Sasson, the son of former Knesset member from centrist Kadima Menachem Ben-Sasson, is miles away in his views from the current arch-right messianic mutation of the old Mizrahi movement and National Religious Party, known these days as the “United Right.”

Ben-Sasson’s sister is a loyal Meretz voter (Tzvia Greenfield was the first and last religious Meretz Knesset representative), but the political left's anti-clerical stances distance him it. The Arab-Jewish Hadash Party represented his universal values before it hooked up with other Arab parties to form the Joint List in 2015.

Like his uncle Avraham Burg, who served as Knesset speaker on behalf of Labor, Ben-Sasson aspires to complete separation between affairs of state and religion and favors diversity in Jewish identities. Ben-Sasson, who holds a PhD in theology, told Al-Monitor that none of the existing Israeli parties represents his values.

The dovish, religious Meimad Party might have come close, but when Prime Minister Ehud Barak called for reforms that would separate state and religious affairs, Meimad broke its alliance with Labor in 1999. Its leader Rabbi Michael Melchior explained that the union was “based on recognition of Israel as a Jewish and democratic state [and on] strengthening its Jewish nature, not separating religion from state.”

In an interview with Al-Monitor this week, Melchior said he agrees with Ben-Sasson that “the clear anti-religious message of the Democratic Camp” pushes away observant Jews such as himself. “I, too, oppose religious coercion and legislation,” he emphasized, “but they attack anything that even smells of Judaism.” Melchior, who served as the chief rabbi of the Jewish community in Norway before moving to Israel, told Al-Monitor that the Democratic Camp recently put out feelers to draw the Meimad movement into their ranks. Melchior, however, cannot understand why the leftist Meretz joined up with Barak to form the Democratic Camp, describing him as a “copy” of Prime Minister Benjamin Netanyahu in his practice of crony capitalism and accusing him of responsibility for spreading the myth that there is no Palestinian partner for peace.

Referring to the strange political bedfellows that have emerged ahead of the elections to ensure that smaller parties get past the 3.25% threshold to enter the Knesset, Melchior wondered, “Is everything permitted in order to cross the electoral threshold?” The rabbi, who dedicates his life to promoting interfaith dialogue and peace, added, “If the left has no values, why would we complain about the Likud?” Melchior is under the impression that the head of the centrist opposition Blue and White Party, Benny Gantz, is seeking inroads into the religious Zionist constituency, but says he does not identify with the party’s vague messages on the issue of peace. On the other hand, Melchior is pleased with both the political and social message of the union between Labor led by Amir Peretz and the Gesher Party headed by Orly Levy-Abekassis. Meimad will not run independently in the upcoming elections, he added, due to the threshold hurdle.

In a September 2015 article "Haughty Eyes: The New Agenda of Religious Zionist Leadership," Ben-Sasson warned that Israel was at a crossroads regarding a well-organized religious-Zionist establishment. In his view, this establishment is imbued with a sense of historic deprivation, motivated by tremendous revolutionary zeal and suspicious of state authorities. Along with those advocating seclusion of the type imposed by the ultra-Orthodox on their communities, Ben-Sasson added, religious Zionist leaders are seeking to become the ruling elite, to mobilize the full powers of the state for the benefit of the religious Zionist sector and to imbue all Israelis with its values, sypreme among them that Israel should be governed by the laws of the Torah. Transportation Minister Bezalel Smotrich, who is currently among the religious Zionists, boasted not long ago that he ‘works for God.’"

Ben-Sasson claimed in his article that most of the current religious Zionist leadership translates this elitism into an aggressive political vision. According to this vision, leaders of the new religious Zionism no longer seek recognition by Israeli society. They are interested in controlling it in order to bring an end to the State of Israel in its classic Zionist version. To accomplish their goal they are even willing to cooperate with those who violate the sanctity of the Sabbath — people usually rejected by this community — and to crown a woman — according to Jewish law women, do not qualify as witnesses in court — as their leader. He cited Rabbi Avihai Rontski, who urged a partnership with secular politicians such as Ayelet Shaked, saying they are “religious in the broad sense of the word.”

The secular politicians serve as sub-contractors of sorts who pave the way for religious Zionist parties such as Habayit Hayehudi, “one of the most significant anti-Zionist forces in the State of Israel today,” to take control of a growing number of power centers, Ben-Sasson told Al-Monitor. They face the far weaker forces of the state’s founding religious Zionism at a time when the Zionist idea that propelled the establishment of the state is in crisis. Ben-Sasson does not expect the emergence of an effective internal opposition to the deep shift being led by the new Zionist religious leadership.

The grandson of one of the founders of religious Zionism who was present at the birth of the state summed up his words with a grave warning: Unless other streams of Israeli society wake up soon, the State of Israel as we know it will cease to exist.