US maintains intelligence relationship with Houthis

Despite alarmist news reports, the Barack Obama administration appears to have adjusted to the rise of the Houthis in Yemen and is continuing attacks on al-Qaeda in the Arabian Peninsula. 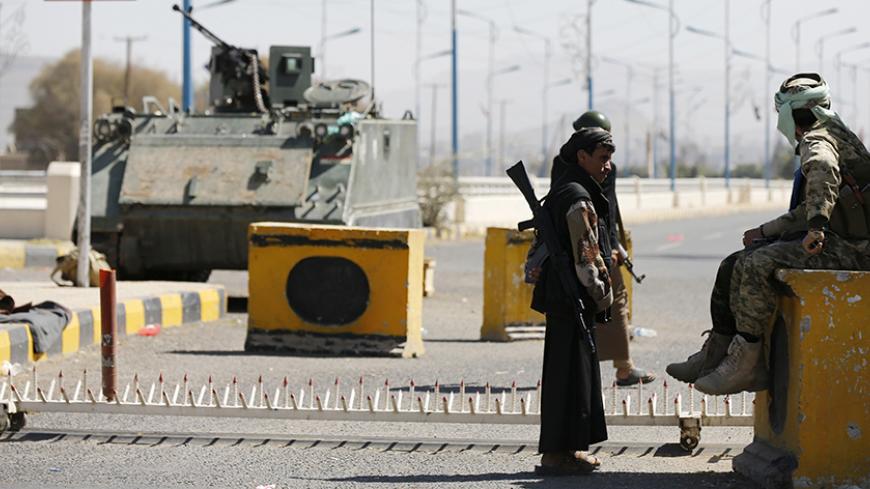 Senior US intelligence official Michael Vickers said Jan. 21 that the United States is continuing attacks on al-Qaeda in the Arabian Peninsula (AQAP) despite ongoing violence in the Yemeni capital, Sanaa, and has an intelligence relationship with the Houthi insurgent group that has seized much of the capital since September.

Speaking at the Atlantic Council, a Washington think tank, as Houthi fighters surrounded the residence of Yemeni President Abed Rabbo Mansour Hadi, Vickers, a special forces veteran and current undersecretary of defense for intelligence, presented a more nuanced view of the Houthis’ recent advances and aims than has been reported in much of the Western and Sunni Gulf media.

While news reports have focused on Iranian support for the Houthis and suggested that they represent a threat to US operations against al-Qaeda’s most potent franchise, Vickers, in response to a question from Al-Monitor, stated, “The Houthis are anti al-Qaeda, and we’ve been able to continue some of our counterterrorism operations against al-Qaeda in the past months.” Asked after the public event whether that included lines of intelligence ​to the Houthis, Vickers said, “That’s a safe assumption.”

Vickers subsequently told Al-Monitor through a spokesperson that the US relationship with the Houthis was not a formal agreement.

"The US has a well-established, collaborative counterterrorism partnership with the Yemeni government, which includes operations, training and intelligence agreements to counter the shared threat we face from AQAP," Vickers said in an email. "The security situation in Yemen remains very fluid; we are watching the situation very closely.

"We do not have an intelligence-sharing agreement with the Houthis. Intelligence sharing requires formal agreements, similar to the one between the US and Yemeni government."

Vickers told the Washington audience that it was not clear that the Houthis' intent is to take over the Yemeni government and try to rule a chronically splintered country. “I don’t know yet if their aim is to take over the state as much as it is to exercise influence and refashion it in a way that they think is more in line with their interests,” Vickers said. He pointed to a Jan. 20 speech by Houthi leader Abdel Malik al-Houthi outlining the group’s demands for an amended constitution and new presidential and parliamentary elections.

The ancestral rulers of Yemen, the Houthis follow the Zaydi branch of Shiite Islam and comprise about a third of Yemen’s population of 25 million. Charles Schmitz, an expert on Yemen at the Middle East Institute, told Al-Monitor, that the Houthis “have a great deal of power and legitimacy in the far north, but that diminishes the further south they get.”

The Houthis, according to Schmitz, were happy to see the ouster of Yemen’s long-time ruler Ali Abdullah Saleh in 2011 but lost patience with the transitional government that followed and with Hadi's current administration. Many Yemenis are dissatisfied with Hadi’s failure to implement a transitional justice scheme and to root out corruption.

There has also been a major disagreement over Hadi’s decision to divide Yemen into six states in a way that would weaken both the Houthis and a southern secessionist movement. Seeking to prevent implementation of this plan, on Jan. 17 the Houthis kidnapped Hadi’s chief of staff, Ahmed Awad bin Mubarak. “That’s what began this latest crisis,” Schmitz said.

According to Schmitz, the outcome of the current crisis could depend on what happens in eastern Yemen, the site of the country’s oil resources. He believes the Houthis could conquer the region, but would not be able to hold on to it. “We may be in for months of standoff,” he said.

Supporters of Hadi, especially Saudi Arabia, have accused the Houthis of being proxies of Iran and compared them to the Lebanese group Hezbollah. Schmitz said that Iran has provided support in recent months but that the Houthis would have rebelled against the government with or without Tehran’s backing.

“From 2004 to 2010, the Houthis won wars against the Yemeni government without Iran,” Schmitz pointed out. “Iran’s role now is non-essential, and the Houthis won’t take orders from them.”

The Houthis’ anti-al-Qaeda agenda, however, in part a reaction to AQAP's assassination of the current Houthi leader's father, synchronizes nicely with both US and Iranian interests in the same way that the United States, Iran and Iran-backed groups are on the same side in Iraq against the Islamic State group (IS).

Many observers of the Houthis have been taken aback by their Iranian-style anti-US and anti-Israel slogans, which Schmitz rattled off: “Death to America, Death to Israel, Curse the Jews and Long Live Islam.” He said the slogans as voiced by the Houthis date to the 2003 US invasion of Iraq and their efforts to embarrass then-President Saleh by tarring him as an agent of the United States and Saudi Arabia.

In fact, Schmitz said, the Houthis have generally not attacked Americans, although State Department spokeswoman Jen Psaki confirmed reports that Houthi gunmen at a checkpoint in Sanaa had fired on a US diplomatic vehicle Jan. 19. There were no injuries, she said.

“They are not terrorists,” Schmitz said. He called the Houthis' backing of US attacks on AQAP “an alliance of convenience.” The tough part now, he said, is “talking sense to the Saudis” and getting them to agree to more influence for the Houthis in the Yemeni government. The Saudis may have little choice.

Psaki told reporters Jan. 21 that as far as the Barack Obama administration is concerned, the “legitimate Yemeni government is led by President Hadi” and that US officials remain in touch with him. “Clearly, we’ve seen a breakdown in the institutions in Yemen, and obviously, there’s a great deal of violence and tension on the ground,” she said. “We’re certainly closely monitoring that and continuing to encourage the parties to continue dialogue, and they are talking.”

The crisis appeared to abate slightly on Jan. 22 amid news reports that Hadi had accepted the Houthis' demands. For Vickers, the priority is continuing to confront AQAP. He told the Washington audience that AQAP is “probably the most dangerous of al-Qaeda’s organizations in terms of the sophistication of its technology and its aim to launch sophisticated attacks.”

While the Jan. 7 storming of the Charlie Hebdo offices in Paris showed that AQAP has “lowered the bar,” given its previous “penchant for very dramatic attacks,” Vickers said such actions are harder to pre-empt. He attributed the attacks in part to the growing competition for leadership of the global jihadi movement between al-Qaeda-linked groups and IS. In this competition, he said, “Attacks on the West in particular are very high on their list and increasing in priority.”

Some analysts have questioned whether AQAP was actually responsible for the assault on the Charlie Hebdo office or whether it had only claimed responsibility after the fact. Vickers seemed to accept the claim and said the long lead time between one of the attackers’ traveling to Yemen in 2011 and the strike was simply another indication of AQAP’s strategic patience and capabilities.

On dangers to US national security, Vickers said the “global jihadist threat” remains at the top and that the amount of territory across North Africa and the Middle East that comprises a safe haven for such groups is “greater than at any time in our history.”

[Editor's Note: This article has been updated since publication to include additional comments from Michael Vickers via email.]