The death of Saudi Arabia's King Abdullah and the resignation of Yemen's President makes Yemen the first priority for Saudi's new King Salman. 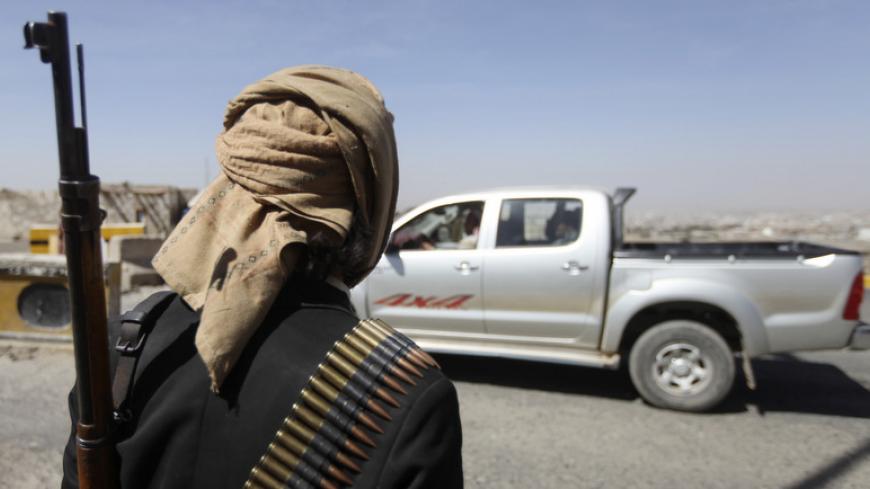 A Houthi fighter mans a checkpoint on a road leading to the US Embassy in Sanaa, Jan. 21, 2015. - REUTERS/Mohamed al-Sayaghi

The death of Saudi Arabia's King Abdullah bin Abdulaziz puts the Yemen crisis on the front burner for the king's successor Prince Salman. Abdullah's death comes on the heels of the resignation of Yemeni President Abed Rabbo Mansour Hadi, which is a major setback for US and Saudi diplomacy, a limited victory for Iran and a plus for al-Qaeda.

The situation in Sanaa is fluid and confused, but it is clear the Houthis have the upper hand. The Zaydi Houthi rebels who have all but deposed the pro-American government in Yemen this week have a slogan that reads, “Death to America, death to Israel, curses to the Jews and victory to Islam.” The collapse of Hadi's government, which openly supported US drone strikes in Yemen against al-Qaeda in the Arabian Peninsula (AQAP) for the last couple of years, makes a pro-Iranian, anti-American, Shiite militia the dominant player in a desperately poor but strategically important country. The Bab al-Mandeb, the strait between Asia and Africa, is a choke point of global energy and geopolitics. The 33-year-old leader of the Houthis, Abdul Malik al-Houthi, gave a triumphal speech Jan. 20 promising an end to corruption and repression.

Iran has been providing arms, money and expertise to the Houthis since at least 2011, if not earlier; its diplomats have hailed the Houthis' success. But the Zaydis are not Iranian pawns nor partners like Hezbollah. They are an independent force. The Houthis' Zaydi faith is considered by many Iranian clerics as a disguised form of Sunni Islam. The Houthis have also been getting help from former President Ali Abdullah Saleh.

The goals of the Houthis are unclear. When their rebellion began in 2004 they wanted greater autonomy in their home province of Saada. Many suspect their goal now is to restore the Zaydi Imamate that ruled North Yemen until the 1962 revolution. In the civil war that followed the Saudis backed the Zaydi royalists against the Egyptian-backed republic. After 2004, the Saudis fought a series of border wars with the Houthis. In December 2009, a Royal Saudi Air Force bombing strike almost killed Abdul Malik al-Houthi.

The Houthis' victory also ironically benefits AQAP by polarizing Yemen, the poorest country in the Arab world, between Shiite and Sunni with AQAP emerging as the protector of Sunni rights. AQAP is fresh off its attack on Paris and has grown since 2009 into the most dangerous al-Qaeda affiliate in the world. It has attacked Detroit and Chicago. It is dedicated to overthrowing the House of Saud.

The Saudis have spent over $4 billion trying to prop up Hadi. The rest of the Gulf Cooperation Council has provided billions more. All aid is now suspended. The Saudis are reportedly encouraging Sunni tribes to resist the Houthis, an old Saudi tactic.

The next shoe to fall may be in Aden. The south has never been comfortable with union with the north. South Yemen is Sunni and the pro-independence movement has been growing since 2011. The Saudis backed the southern rebellion against Saleh in 1994 with arms and money. Riyadh might favor a break-away again.

Yemen does not feature often in US foreign policy discussions, so it is no surprise that President Barack Obama did not mention it in his State of the Union speech. This is all the more true when one realizes we have very little leverage to influence the outcome in Yemen. Hadi was our best bet. But it is indicative of the complex challenges the United States faces in the Islamic world and the urgent need for a smarter strategy to deal with it.

The president rightly said Jan. 20 that America needs a smarter strategy to fight terror that avoids drawing us into quagmires like Iraq. He is right to say we need local partners to fight extremism. He is right to say sending lots of American boots into civil wars is a mistake. Yemen was supposed to be a role model for this smarter approach of building local capacity and getting our allies to do more. That it is not working is a sobering reality.