Inviting Prime Minister Benjamin Netanyahu to address Congress on Iran sanctions without the White House’s knowledge was seen as an unprecedented slap at President Barack Obama. 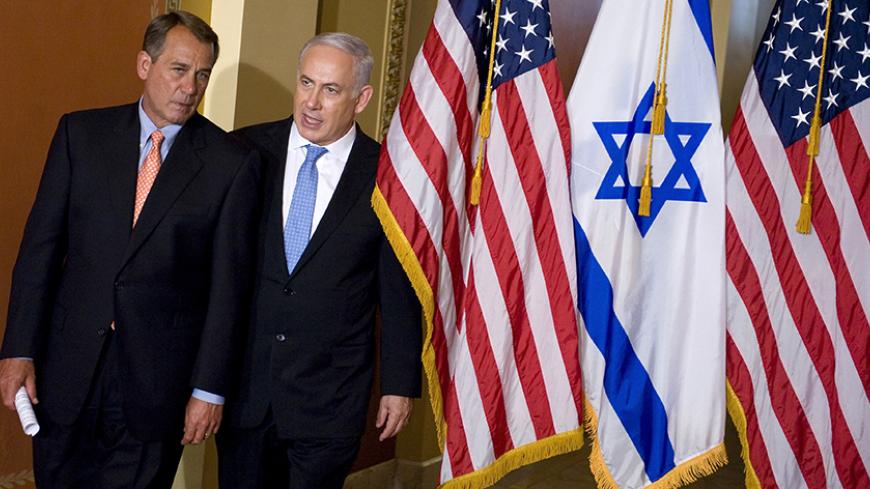 US House Speaker John Boehner, R-Ohio, (L) arrives with Israel's Prime Minister Benjamin Netanyahu to address reporters after Netanyahu's speech before Congress at the Capitol in Washington, May 24, 2011. - REUTERS/Jonathan Ernst

“If we were, for a moment, to ignore the Pollard incident, the American administration has never been so humiliated by Israel.” I was told this on the evening of Jan. 21 by a senior Israeli diplomat currently serving. He told me so after having learned through the media — much like President Barack Obama — that Prime Minister Benjamin Netanyahu had arranged an invitation for himself to address both houses of Congress on Feb. 11, just five weeks before the Israeli elections on March 17.

The release of the invitation, which was concocted, planned and delivered in secret after weeks of surreptitious contacts, without Obama, Secretary of State John Kerry and US Ambassador to Israel Dan Shapiro even knowing about it, had a dramatic effect. It was unlike anything that ever happened before in the bilateral relationship between the White House and the Prime Minister’s Office in Jerusalem. Soon after the invitation hit the news, an Israeli diplomatic source in Washington described its effect as “shock and awe.” Another senior official in the Israeli Foreign Ministry told me, “Today, more than ever, I would like to be on the line during the phone call between Ambassador Shapiro and Prime Minister Netanyahu and his staff.”

Most of the outrage focused on the way it all happened. Unfortunately, I am not at liberty to quote my American sources by name, but what was heard, written and said about the incident on both sides of the ocean on Jan. 21 was unprecedented. I therefore submit this edited summary instead: “It is no longer a matter of policy. We have no expectations of Netanyahu when it comes to that. It is a matter of basic human dignity. This kind of behavior is not the way people act. People don’t do things like that. The Israelis know how to pick up the phone every Monday and Thursday, screaming for help. There’s the Security Council. There’s The Hague [International Criminal Court]. They need an urgent veto. They need our support during Operation Protective Edge. They are not embarrassed to ask for our help, and we provide it to them, despite everything. We’ve increased funding for the air-defense Iron Dome system again and again. Security cooperation is at a record high. And yet, after all that, the president has to learn from the TV news that Netanyahu is coming to Washington? It is unprecedented. It is barbaric behavior. It is so impolite that it is disgraceful. It is simply inconceivable.''

In the hours following the release of the news, the embarrassed and confused Americans were busy collecting information, while at the same time gathering up the broken pieces that were left of their self-respect. They discovered that the invitation was concocted by the Israeli ambassador to Washington, Ron Dermer, together with House Speaker John Boehner. Communications between these two men were kept absolutely secret until they bore results.

“If only the military action in the Syrian part of the Golan Heights last Sunday [Jan. 18], which is being attributed to Israel, would have been planned with the same efficiency and kept just as secret,” said one senior Israeli official.

It will be recalled that Dermer is practically a persona non grata in the White House. For the past few months, he has been boycotted by the president and all of his closest advisers (especially National Security Adviser Susan Rice). In fact, Netanyahu sent Dermer to Washington despite American hints and warnings not to. Dermer has very close ties to the Republican Party and especially to Adelson. The Americans’ main problem now is that they cannot humiliate Dermer any more than he already has been humiliated. Netanyahu’s personal envoy to the White House, Attorney Yitzhak Molcho, can only meet with Rice on condition that “he doesn’t bring Dermer with him.”

But the Americans weren’t the only ones shocked. Senior American officials spoke this week of how they heard shock and disappointment much like what they felt from colleagues at all levels of government in Jerusalem. “The Israelis were embarrassed,” said American sources. “They didn’t know how to explain what happened. Some of them actually apologized.”

As far as Netanyahu is concerned, this is a brilliant political achievement. Nothing bolsters Netanyahu among the Israeli public more than a speech before both houses of Congress or the General Assembly of the United Nations. These annual speeches (Netanyahu hasn’t missed a single UN General Assembly since he took office) push Netanyahu up in the polls by more than just a few points. And now he has tied a record held by late British Prime Minister Winston Churchill, the world leader he admires most, in the number of times he has addressed both houses of Congress. Netanyahu can stick his tongue out at his opponents in Israel, wink at his electoral base, and mock all the prophets of gloom who foretold how he would bring destruction on Israel’s relationship with the United States. He will most likely say that America is much bigger than the White House, that “I know how to operate in America,” and that “I know how to defeat the most powerful man in the world, who couldn’t do anything to me, and was forced to grit his teeth and watch me act behind his back in his own backyard.”

But this could also be a Pyrrhic victory. Until now, the US administration kept its distance from the Israeli elections. The chances of finding even a single official in the corridors of the White House, the State Department or the Pentagon who wants Netanyahu to win the election on March 17, are about the same as finding an Obama supporter in the Prime Minister’s Office in Jerusalem. Nevertheless, the Americans have decided to act like gentlemen until the very last minute and to keep their distance from the Israeli political tempest. Much to their chagrin, they have discovered that this tempest is chasing after them and has set up an illegal outpost in their own living room.

As one senior Israeli official said Jan. 21, “Netanyahu’s arrival in Congress without the cooperation of Obama and without Obama being updated or even a partner in the move is a conscious, formative event. It will be etched on Obama’s flesh and accompany him until the end of his term.” He then added, “It is as if Netanyahu walked into the Oval Office and took the president's seat away from him.”

Furthermore, Obama just delivered his State of the Union address, in which he made clear to Congress that he would veto any initiative to renew sanctions on Iran. Now Netanyahu is coming to point out his mistake and to incite Congress against Obama over that very issue. It seems to me that Obama would prefer impeachment rather than heading down that Via Dolorosa, led by one of the people he detests more than anyone else in the world.

The cheering from Netanyahu and his people echoed across the heavens on Jan. 21, dimming, if only for a moment, Israeli panic over the possibility of the northern sector heating up in a conflict with Iran, Hezbollah and Syria. Unfortunately, those cheers will not last long. Obama still has two more full years in the White House. Anyone who holds Israel important should hope that these are not the two longest years in Benjamin Netanyahu’s life.

If Netanyahu does manage to subvert the negotiations between Iran and the world powers by going over the president’s head to get American sanctions renewed, he will be accused of being responsible for the greatest diplomatic failure of Obama and the West. Israel will likely pay the price. To add another twist to the plot, on the morning of Jan. 22, it was leaked that the Israeli Mossad is cooperating with the US administration, contrary to the position of its direct commander, Netanyahu. According to the report, senior Israeli officials in the Mossad warned American officials and senators that the renewal of sanctions against Iran would result in that country accelerating its nuclear program and jeopardizing efforts to resolve the crisis peaceably.

The news sent shock waves through Jerusalem and resulted in a meeting between Netanyahu and the director of the Mossad, Tamir Pardo, to clarify the matter. If the report is true, this is nothing less than a putsch by a secret espionage agency against its commander, who is also the leader of the country, a situation that would force Pardo to resign. As expected, a thorough Israeli denial of the report was released a few hours later.

Still, as one final warning, it must be noted that Netanyahu’s approach, which states that negotiations with Iran actually help that country to continue deceiving the West and catch it off guard, is actually legitimate. It is based on intelligence evidence and the historical record. When it comes to Iran, the cost of making a mistake would be catastrophic.

The possibility that Netanyahu is right about the Iranian issue should not be discounted. Besides, Obama could also blame himself. He is responsible for turning himself into one of the most despised US presidents among the Israeli public, and in so doing he lost the leverage that every other president had on Israel’s leaders: the knowledge that the Israeli public would never forgive any harm caused to the Jewish state’s most valuable strategic asset, America.