US will veto Palestinian UN bid

The US debated which course of action would distance Prime Minister Benjamin Netanyahu the most from another term in office, especially in view of the Palestinian bid in its most “extreme draft” to the UN and the American veto power. 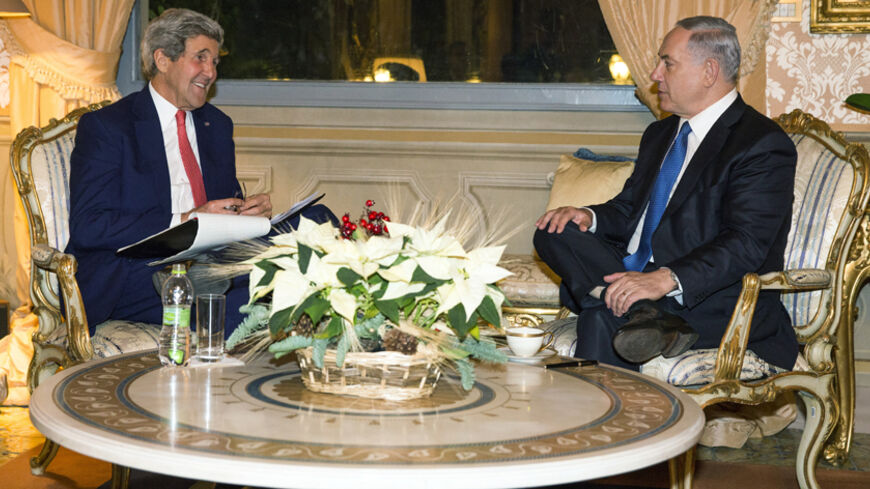 Israeli Prime Minister Benjamin Netanyahu and US Secretary of State John Kerry met in Rome on Dec. 15, in an effort to formulate a joint position in response to planned moves by the Palestinians at the United Nations in the coming weeks.

Following the meeting, the big question still lingered: Would the Americans cast a veto over a potential Palestinian request that the United Nations’ Security Council recognize Palestine as an independent state? Netanyahu did not divulge to reporters who accompanied him on the plane whether he received an American guarantee for the sought-after veto. White House officials said the issue was still being debated.

On the night of Dec. 16, however, it became known that the decision has been made. The Americans will indeed cast a veto over the Palestinian request. This veto will be welcomed with satisfaction in Jerusalem. Surprisingly enough, Ramallah will also receive it with understanding.

The Palestinians have transferred to the US over the past few days secret messages, according to which they do not object to a veto. Why? Because President Mahmoud Abbas knows that the Palestinian bid to the UN, which contains the most extreme draft — a version unacceptable to both the US and Europe — is doomed to fail. Abbas would rather absorb the American veto. This will actually enable him to continue toward his alternative plan, meaning joining many other UN institutions. This alternative plan would permit Abbas to drag Israel to the International Criminal Court in The Hague, in the framework of the diplomatic battle he is waging against it. Such a setup will gain Abbas much esteem in the Palestinian street for ''going all the way'' against the UN, while at same time will allow him to accumulate achievements and pressure Israel.

While these words were penned, feverish discussions were being conducted between the Americans and the French, and between the Americans, the Europeans and the Palestinians. The United States tried to substitute the Palestinian proposal with some other version, notably a French moderate proposal. The idea was for there to be a proposal that would either gain overall approval or be postponed. The Palestinians refuse to postpone the submission of their UN Security Council bid and also refuse to change it. Therefore, as things stand now, the [Palestinian] proposal will be submitted, and the US will cast a veto over it.

At the same time, the French insist on promoting their proposal, while the Israelis (both Netanyahu and his opposition rivals) would prefer for the French to postpone the whole maneuver until after the Israeli elections.

Dec. 17 is expected to be titled ''Black Wednesday'' in all that concerns Israeli diplomacy: The European judicial system will remove Hamas from the list of terror organizations; Geneva Convention member states will convene following a Palestinian request — in order to pass a number of resolutions against Israel; The European Parliament is expected to vote on a softened version of a resolution recognizing the Palestinian state; and last but not least, the Palestinian bid to the Security Council is to be submitted. Such a diplomatic blitz against Israel has not taken place for quite some time.

The Americans, on their side, were torn between all the polarizing and contradictory interests playing in this affair. The dilemma they face is especially complicated. The Americans want to do the right thing. But what is the right thing for them? As far as they are concerned, it is whatever is most effective in reducing Netanyahu’s chances of winning re-election to another term as prime minister of Israel. Of course, the Americans would never admit it, even if they were locked up for interrogation in Guantanamo, but about two weeks ago [in early December], that was exactly what I heard from several senior US officials in private, highly classified talks.

“The question,” said one senior American official, “is how our decision will impact the Israeli electorate. If we don’t cast a veto, how will that affect Netanyahu’s status in Israel before the elections? And the exact same question must be asked if we do cast a veto.”

What is at stake, however, involves more than just a veto. The Palestinians are embarking on a complicated process that involves all sorts of distinct moves. One of these potential moves is becoming a signatory to the Rome Statute of the International Criminal Court (ICC), as this would enable them to drag Israel before the ICC at The Hague. Then there is the French initiative to pass a UN resolution to end the Palestinian-Israeli conflict within two years, with a clearly defined deadline and all the familiar parameters: a Palestinian state within the 1967 borders but with territorial swaps, the partition of Jerusalem, and so on. The US administration is supposed to help Netanyahu deflect all of these problematic moves, scheduled to start raining down on Israel over the next few months.

Meanwhile, decision-makers in the administration were left asking themselves, What's the best thing to do? The Associated Press recently reported on a discussion at the White House on this very issue. There was a divergence of opinion between Kerry and the national security adviser, Susan Rice. Everyone in the White House, from President Barack Obama to Kerry to Rice, knows that if Netanyahu is elected to another term, it would effectively be the death knell for the peace process, although it remains unclear what alternative process this might benefit. Obama wants to see Netanyahu elected to a second consecutive term about as much as Netanyahu would want to see Obama re-elected, and perhaps even less so. The Americans also know, however, that intervention in the Israeli elections will cause tremendous damage to their status and perhaps even to their objectives.

Until Obama came to power, even the slightest negative insinuation from Washington about the Israel-US relationship had the potential to topple an Israeli prime minister. President George H. W. Bush brought down Prime Minister Yitzhak Shamir in 1992 when he refused to approve Israel’s request for $10 billion in international loan guarantees so that it could absorb a wave of Soviet Jewish immigrants. President Bill Clinton helped to bring down Netanyahu in 1999, when he turned his back on him and made sure that the Israeli public saw it. Then came Obama, who made a point of making every possible error along the way, fundamentally marring the enormous trust that the Israeli public had for American administrations. This transformed Netanyahu into a popular hero who would not be deterred by the world’s superpower, and even managed to rein it in while disparaging the Americans, and even perhaps intentionally ignoring them.

“If we decide not to cast a veto,” said one senior US official in a private conversation, “it could unite the Israelis behind Netanyahu. It could turn the US into the ‘Great Satan’ once and for all to large swathes of the Israeli public, which feels besieged and under attack, and which has moved perceptibly to the right over the past few years.” Such a move could be a stunning own-goal by the Americans, which explains their reservations.

When Obama won his second term as president, in 2012, this column concluded that if Israel persisted with its hard-line policies on the diplomatic front, the Americans would use the Europeans when they wanted to attack Israel or impose sanctions and boycotts against it. This assessment proved to be what happened over the past year.

Europe has already taken a series of explicit steps to launch a boycott of Israeli goods and advanced various initiatives related to similar moves. Jerusalem is well aware that the inspiration for such moves and even the instructions for them came from Washington. It is much harder for the American president to take such steps against Israel. With Congress weighing down on him and the fear of AIPAC looming over Congress, no one will let Obama go against Israel in any significant way. That is why Europe is so necessary. This opens a strange new chapter in the concept of “leading from behind,” the concept voiced by Obama when NATO decided to intervene in the Libyan civil war. The question is whether this approach will be successful. Although the West managed to overthrow Moammar Gadhafi, everybody now seems to miss him.

Other questions that the US administration is tackling include what to do with the parameters that Kerry formulated during the negotiations between the parties that he oversaw. Should the proposal be placed on the table? Should its main points be leaked, or at this stage, should the proposal be shelved? Here too, it is thought that the release of the American initiative would unite large numbers of Israelis behind Netanyahu as the only person who could “stave off the decree.” After all, he has done it before and has the receipts to prove it.

Should more statements be issued against Netanyahu, blaming him for Israel’s increasing isolation in the international arena and the dearth of diplomatic expectations in the region? The general assessment is that the Americans will ultimately decide to keep a low profile and only make veiled references about Netanyahu while making it clear that they intend to push for a renewal of the diplomatic process after the elections. In so doing, they would be hinting to Israelis that they would be better off if the government formed after the elections could work with them and rehabilitate the relationship and trust between the parties. In this way, they will not be forced “out of the closet,” where Netanyahu will be able to continue to attack them. Instead they will engage in a surreptitious dialogue with the collective Israeli conscience.

Once again, the dirty work will apparently be left to the Europeans. Netanyahu spoke with French President François Hollande a few days ago and tried to persuade him to postpone the French initiative to resolve the Middle East conflict through a Security Council resolution. It remains unclear whether Hollande was convinced to do so. What is certain is that Obama will play a significant role in the outcome. If Obama convinces Hollande to do the opposite — that is, accelerate the initiative and increase pressure on Israel — it might help the Israelis realize that keeping Netanyahu in office will lead to a diplomatic hell with no way out. Given the current state of affairs, the preferable solution for the Israelis would be to find themselves a leader who is able to re-enlist the support of the Americans, conduct negotiations with the Europeans, and most important, talk to the Palestinians.

This story was updated to reflect the US veto decision.