After UN failure, Palestinians reach out to ICC

Israel estimates that the failure of the Palestinians to secure a majority at the UN Security Council stems from a series of tactical mistakes, reflecting the enormous internal pressure to which Palestinian President Mahmoud Abbas is subjected. 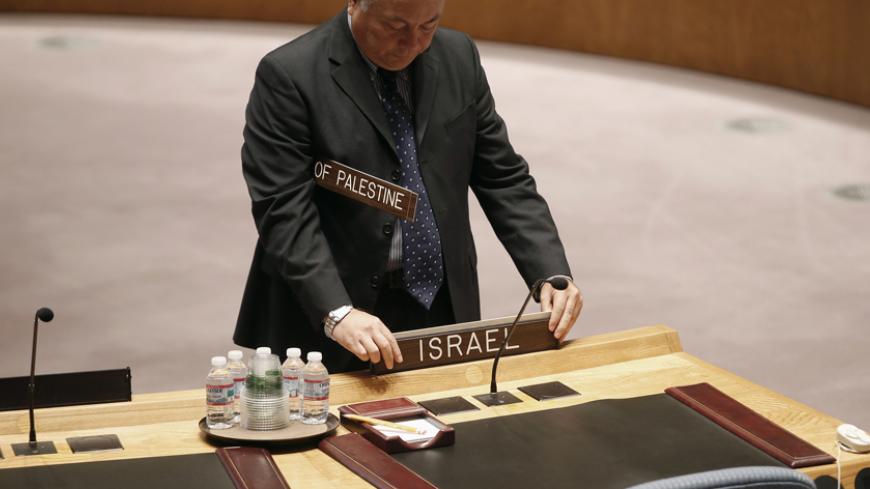 A man places signs for Israel and Palestine at the table before a UN Security Council meeting on the situation in the Middle East, at the UN headquarters in New York, July 31, 2014. - REUTERS/Mike Segar

The Palestinian loss in Dec. 31's UN Security Council vote was a “chronicle of a defeat foretold.” It has been described as a brilliant diplomatic victory for Israel and the United States, but this is hardly accurate. The Palestinians could have waited just a few days until five of the 10 temporary members of the Security Council were replaced and broken through the nine-state barrier with relative ease. Instead, they preferred a quick vote and losing.

A fascinating battle was fought behind the scenes, between more than two sides. There were the Palestinians, who made up a side of their own, and there was Israel, which is more isolated than ever before. Then there was the United States with its own interests (not all of which are compatible with Israeli interests), France with its own separate proposal and independent intentions and others.

The American steamroller did its job in the end, but Israel showed creativity, too. For example, the ties that Foreign Minister Avigdor Liberman forged in Africa over the last few years really helped to convince Rwanda and Nigeria to abstain at the very last moment. The close ties between wealthy Israeli entrepreneur Hezi Bezalel, who was once an arms dealer, and Rwandan President Paul Kagame helped to arrange a long telephone conversation between Kagame and Prime Minister Benjamin Netanyahu and resulted in Rwanda’s decision to abstain from the vote.

The bottom line is that the Palestinians got eight of the countries they needed to support them and fell just one country short of the majority that would have forced the United States to veto the resolution. The Americans decided long ago that they would veto the extreme Palestinian version of the proposal, but it seems as if the Palestinians preferred to “lose with dignity” and let all the parties go their separate ways feeling more or less satisfied.

The next day, the Palestinians submitted requests to sign 22 international conventions and treaties, including the Rome Statute, which is the basis for the International Criminal Court (ICC). They did so intending to submit in the near future a complaint about war crimes allegedly committed by Israel as of June 2014.

“We are not scared of the Palestinians going to the International Criminal Court,” said a senior Israeli Foreign Ministry official who asked not to be named. “It is a very complicated move, which could take a long time and have unforeseeable consequences that are potentially explosive to both sides.”

This attempt by Israel to detract from the significance of this appeal to the ICC by Palestinian Authority (PA) President Mahmoud Abbas is based on very thorough administrative groundwork by the National Security Council in Jerusalem. This work involved senior officials from the Foreign Ministry, the Military Advocate General, the Defense Ministry and other branches of Israeli officialdom.

What that senior Israeli official said is accurate, but describes only part of the whole picture. Israel has prepared a file crammed to overflowing with the “best stuff,” including a series of optional complaints that Israel can issue against the Palestinians in The Hague should Abbas open that Pandora’s box and release the demons inside it.

“It seems to me that it will be much easier to prove war crimes committed by the Palestinians than war crimes attributed to us,” a former top official at the International Law Department of the Military Advocate General told Al-Monitor this week on condition of anonymity. ''Systematic firing of thousands of rockets at a civilian population, sending hundreds of suicide bombers to blow themselves up in population centers and other incidents of this kind will be easy to prove. In many instances, the people who gave the orders or transferred the necessary funding are still sitting in Gaza and even in Hebron, Jenin and Ramallah.”

Despite all this, behind the scenes, seniors in the Israeli diplomatic establishment are concerned about this latest development. They are fully aware that sometimes buzz is all it takes to create reality. The fact that the threat of charges now hovers over the heads of numerous Israel Defense Forces officers and fighters as well as over senior officials in the defense establishment and even in the diplomatic and political establishments could drag all the parties down a slippery slope. It is true that the process itself is very complicated, as was shown recently in the case of the Marmara flotilla. It was decided to close the case and not issue an indictment. Nevertheless, this is still a very obvious escalation.

What led to the Palestinians’ suicidal move this week? Experts keeping close tabs on the diplomatic front believe that it was the result of a series of tactical errors, made from internal pressure. Abbas is coming under growing criticism at home and overseas as someone who “does nothing and gets nothing in return” in his dealings with Israel, while Hamas members are spilling their blood in a real war. He is losing allies to his most bitter rivals, led by Mohammed Dahlan. His close entourage is being undermined. His most judicious and experienced advisers are losing prominence to a more belligerent crew, searching for a violent way out.

It must not be forgotten that the pressure on Abbas is genuine. He has a serious problem, and no real achievement to show his people. All his previous strategies have failed. The negotiations have collapsed, as has reconciliation with Hamas, and his efforts at the United Nations have gained nothing. As a result, he decided to embark on a three-stage strategic move. The first step was to submit an extreme proposal to the Security Council. The second was to sign the Rome Statute and appealing to the ICC, and the third was supposed to be the voluntary dismantling of the PA.

No, Abbas has no intention of voluntarily dismantling the PA at this stage, but he has no problem threatening Europe and the rest of the world with such a move, hoping that someone would stop him in time. The real intention was to recruit enough international support to provide Abbas with an ejector seat at the right moment, if possible before he even reaches the second stage of Rome and The Hague.

Abbas made his plan public and set off. During the first stage, it seemed as if everything was going as intended. The Palestinian strategy motivated the French to present their own proposal to the Security Council. It was a logical and more moderate plan that could have won widespread support. At this stage, former Israeli President Shimon Peres and former Justice Minister Tzipi Livni entered the picture (as told by Secretary of State John Kerry himself, with surprising candor). They convinced the Americans and the French to postpone the move until “after the elections” in Israel, to ensure that it does not further strengthen Israel’s right and damage its center-left bloc.

What has not been made public is that Netanyahu also employed considerable pressure to postpone the move. His reason was that such a move could strengthen Economy and Trade Minister Naftali Bennett even more at his expense. Israelis unite and move rightward when they feel besieged. Netanyahu sighed in relief when the French, encouraged by the Americans, decided to concede.

By the way, this French concession was preceded by a bitter argument within the American team. Not everyone agreed with the approach. Some, especially those involved in the diplomatic negotiations, believed that the United States should continue to pursue its real policy despite the elections. They thought that they should have allowed the French to put their proposal up for a vote. But this approach was defeated.

Then Abbas suffered a crushing defeat in the United Nations. He may have done this intentionally, having fallen victim to a ploy by the Nigerians, who made him believe that they were on his side but abstained at the very last moment. At the end of the day, he found himself with a crushing defeat. In an effort to diminish the stinging insult and the image damage, he was forced to skip immediately to the next stage in his master plan: the Rome-Hague stage.

What this boils down to is a complete loss of control. Going to The Hague was supposed to be a gradual step, presented at first as an abstract threat, again in the hope that some responsible adult would prevent it from snowballing. But no such figure showed up. The Palestinians appealed to The Hague and now they find themselves caught up in the second stage, a stage they did not want to reach, certainly not so quickly. And all of this is happening with Israel in the midst of an election campaign, making Netanyahu, Defense Minister Moshe Ya'alon and Liberman much more militant and dangerous than before.