Arab world insists on support of West for Palestinian statehood

Egyptian and Palestinian officials stress that it will be easier for Arab countries to cooperate with the United States and Europe on fighting the Islamic State if their people see that the West promotes Palestinian statehood. 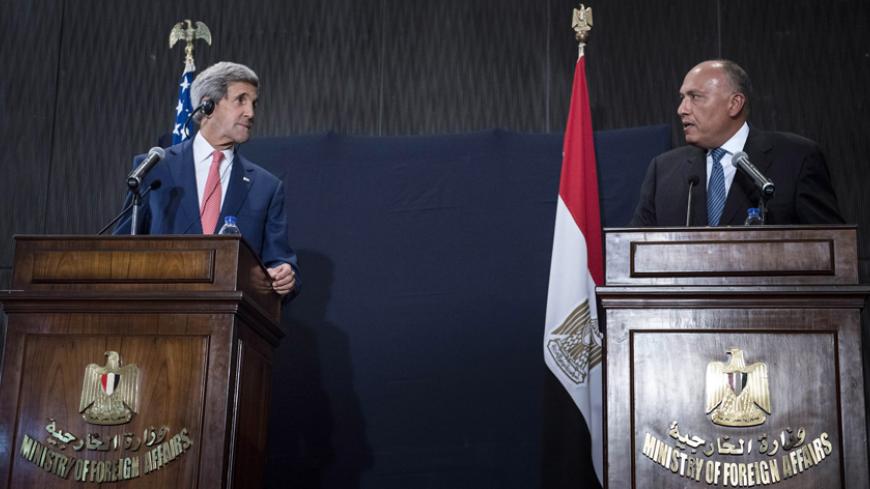 An Egyptian Foreign Ministry source told Al-Monitor about Cairo’s disappointment over the United States' rejection on Dec. 31 of the Jordanian proposal on Palestinian statehood at the UN Security Council. "The United States probably does not understand how important the progress on the Palestinian track is to our continued participation at the anti-Islamic State [IS] coalition," the source said. "Our ability to participate stems also from the mood in the street — which the US has probably never fully understood. Egyptians, mainly the youth, follow on a daily basis the state of their Palestinian brethren under Israeli occupation."

Indeed, Egyptian officials also contributed to the Jordanian effort to reach an accepted compromise formula with the French on the UN Security Council bid. According to the Cairo official, his government was dismayed by the fact that the United States did not issue a declaration in favor of the proposed timeline for negotiations and of the 1967 lines: “We, as well as our Jordanian counterparts, feel that the US administration is dancing to the tune of [Prime Minister] Benjamin Netanyahu, despite his anti-peace policies.”

The official told Al-Monitor that recent consultations between Egyptian and Arab League officials included a thorough analysis of the predicament brought up by the pragmatic Arab countries. On the one hand, Egypt, Jordan, Saudi Arabia and other Gulf countries take part in the Western camp's fight against fundamentalism, Iran’s nuclear ambitions and IS and al-Qaeda terror. On the other hand, this stance is not an easy sell to their respective constituencies, especially in Jordan and Egypt; the Islamist religious groups still have an impact on public opinion. The West, and especially the United States, are often branded and abhorred as anti-Arab and anti-Muslim. The more the Americans and Europeans are perceived as advancing the emotionally-loaded Palestinian statehood issue, the easier it will be for the pragmatic Arab states to cooperate on other strategic issues. This is true especially concerning a potential Iranian deal and the struggle against IS. The Egyptian official also said that the issue in question is actually the Western coalition, more than support for the Palestinians.

Consultations between Egyptian President Abdel Fattah al-Sisi and Palestinian President Mahmoud Abbas and their representatives have intensified lately. Cairo has offered to dispatch Egyptian military forces to the future Palestinian state as part of the eventual security arrangements. Possibly most important was the latest diplomatic joint effort by Egypt, Saudi Arabia and Jordan to curb Qatar’s support for Hamas terror. Cairo will continue to fight Hamas terrorism and at the same time may attempt to bring the political Hamas leadership closer to Cairo. The official summarized by saying that, come spring of this year, the Arab pragmatic axis will have to decide on its future strategies, especially given the nature of the next Israeli government and the post-election US policy on the Palestinian statehood issue.

A senior Palestinian Authority official close to Abbas echoed the Egyptian disappointment, but stressed that they had no expectations to begin with about the US' Security Council vote. Yet, they were encouraged by the French favorable vote and even the British abstention: “We want to make clear to Israel and the US that we will make every effort to bring the international community closer to an affirmative and active position to end the Israeli occupation. The actions we launched in the aftermath of the Security Council vote and the signing of several international conventions, including the Rome Statute that enables us to join The Hague International Criminal Court, make up a diplomatic intifada.”

At this moment in time, Palestinians deem such moves as more useful than a violent uprising against the occupation. It may even become a long-term strategy if after the March 17 elections there isn't any realistic negotiation partner in Israel. According to this source, the backbone of the strategy is Palestinian coordination with Egypt, Jordan, Saudi Arabia and the Arab League. The official also claimed with self-confidence that the Arab world will not be taken for a pro-Western ride without Palestinian statehood.

Thus, the Palestinians are convinced that as long as the Israeli settlement policy continues, the Palestinian diplomatic effort also must continue and that these efforts will succeed. Or in his words: “Netanyahu and [Economy and Trade Minister Naftali] Bennett are our best ambassadors.”

At the same time, a French Foreign Ministry official spoke to Al-Monitor with great satisfaction about the French affirmative vote at the Security Council. He believes that wherever France is today, most of the European Union will also be by spring of this year, unless the Americans manage to bring about a renewal of Israeli-Palestinian negotiations on the basis of the 1967 lines and with a timeline for negotiations (not for implementation, as the Palestinians are demanding).

Netanyahu took pride in the defeat of the UN Jordanian proposal, having convinced the presidents of Nigeria and Rwanda to abstain. There is no long-term thinking in the prime minister’s office in Jerusalem — all eyes are fixed on the elections. But this defensive position — of only standing up to the Palestinians and deflecting international pressures — reflects to a great extent the whole policy DNA of the current Israeli prime minister. Policy initiatives — coordination with the pragmatic Arab countries and Europe on Palestinian statehood and on a two-state solution — are not in Netanyahu’s political vocabulary, with or without elections.