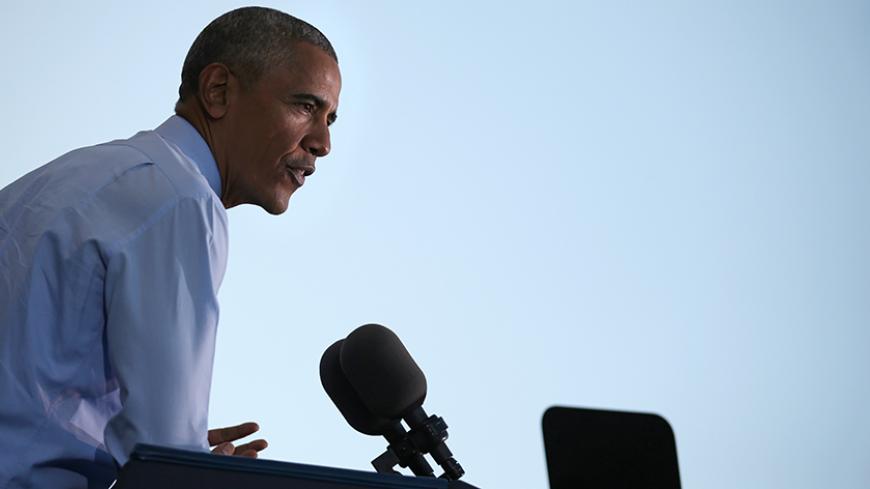 Both Israeli and Palestinian leaderships are opposed to policy moves by US President Barack Obama on a two-state solution. Obama is apparently going to make an announcement on US Middle East policy after the Nov. 8 elections, Al-Monitor has learned from a senior American diplomat in Tel Aviv.

Currently, Obama is fully engaged in the election campaign on the side of Democrat candidate Hillary Clinton. He will do very little on the Middle East front, so as not to damage her chances among American Jewry. Suspicious that Obama will make a policy move on the region, 88 senators have signed a letter to the president asking him to veto any UN Security Council resolution that is not balanced. That letter was advanced by the pro-Israel lobbying group AIPAC with some help by Democrat activists and by the pro-Israel pro-peace J Street lobbying organization. A senior official at J Street told Al-Monitor on the condition of anonymity that the organization conditioned its support of the letter on the wording “an unbalanced resolution.” Hence, the door is left open for a balanced US-sponsored Security Council resolution in the future.

Obama’s considerations in making a November declaration are based on his wishes to leave a Middle East policy legacy to his successor, thus avoiding a policy vacuum until the next administration takes over. Such a declaration will also set the record straight in relation to his own Middle East policy efforts.

According to the US diplomat in Tel Aviv, the White House and the State Department are weighing which policy measure to take, out of three possibilities.

The first is a presidential speech outlining a framework for a two-state solution along the lines of Secretary of State John Kerry’s framework. The second possibility is a presidential speech outlining a more regional approach, linking the coordination on the fight against the Islamic State together with Egypt, Jordan and Saudi Arabia to a two-state solution process. A third possibility would be a US-sponsored Security Council resolution based on the US-proposed framework of spring 2015.

In any case, the US policy framework for a presidential speech will most probably consist of the following elements: a two-state solution based on the 1967 lines with mutually agreed land swaps and stringent security arrangements within a two-state solution with Israeli military presence along the Jordan River and mutual recognition between the two states, including the recognition of Israel as the homeland of the Jewish people. It will not include the right of return for Palestinian refugees, but a just and agreed solution to the Palestinian refugees, mainly through international compensation and the financing of the resettlement of refuges within the Palestinian state. Another important element would be regional cooperation and normalization of relations between Israel and Arab states based on the 2002 Arab Peace Initiative.

The senior US diplomat told Al-Monitor that the preferred option right now is for the president to outline a regional plan, with the Arab Peace Initiative and anti-regional terror as a basis.

Obviously, the nature of Obama’s actions will depend on the outcome of the elections. In the case of a Clinton victory, he will consult her and opt for a more cautious approach. The opposite is true for a Trump victory.

But while the Obama administration keeps looking into the possibility of a presidential declaration, no joy has been registered on the Palestinian side. On the contrary. Less than a month ago, the Palestinian delegation to the UN General Assembly returned to Ramallah with great anger and criticism at the American positions that were expressed to Palestinian President Mahmoud Abbas by Kerry at their Sept. 19 meeting in New York. The Palestinian leadership, although aware of the schism between Obama and Israeli Prime Minister Benjamin Netanyahu, believes that the Obama administration is fully on Israel’s side.

According to Abbas’ entourage, the Palestinian president objects to an Obama declaration, as he fears that most of its outline would be close to the Israeli positions. Abbas is especially concerned about possible American demands on Palestinian recognition of the Jewish state and American positions on the Palestinian refugees’ issues. He wants something more binding at the UN Security Council with a reasonable timeline to Palestinian statehood based on the 1967 lines.

And so the Palestinian Authority objects to any Obama presidential speech, while Israel objects to any planned Obama move in the UN Security Council. Netanyahu made this clear to the US president in their Sept. 21 meeting in New York. A senior Israeli Foreign Ministry official told Al-Monitor on condition of anonymity that Netanyahu will encourage pressure from Congress and the Jewish lobby in order to prevent a Security Council resolution, either by the United States or the French, on Palestinian state permanent status or the settlements. Contrary to a resolution, “a speech is just a speech,” he said.

But it’s still very possible that both sides will miss Obama. He is a fervent supporter of a fair two-state solution for both strategic and moral considerations. Strategically, he believes that this is the key for Israel to maintain its democratic character and its long-term security; morally, because he is opposed to the occupation of another people.