The Palestinians need not worry about postponing the vote on their UN bid until after the Israeli elections, since even if Prime Minister Benjamin Netanyahu is re-elected, the push toward Palestinian statehood is inevitable. 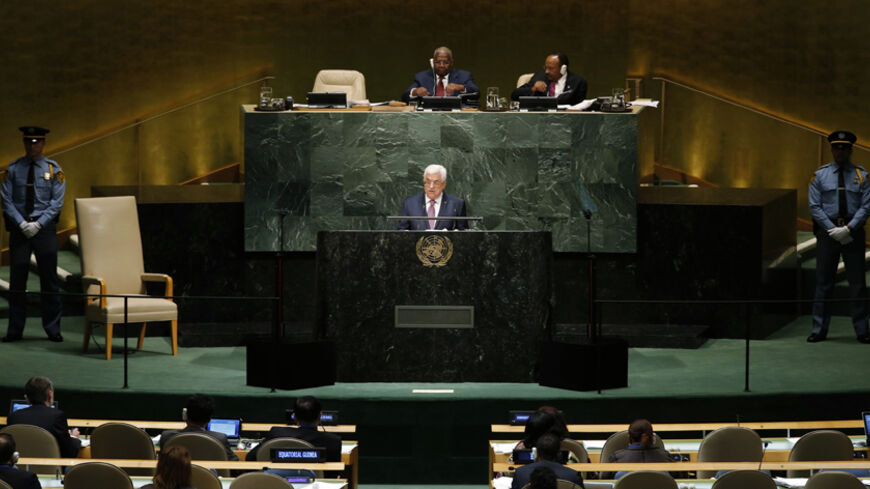 Serious pressure is being exerted these days on the Palestinian leadership in Ramallah. This comes in response to the request it submitted to the UN Security Council via Jordan Dec. 17, to recognize a Palestinian state within the 1967 borders and to put an end to the Israeli occupation within two years.

From the moment this request was submitted to the secretariat of the Security Council, a persuasion and pressure campaign on the Palestinian Authority (PA) commenced. This campaign, led mainly by the United States, demands that the PA hold back until after the Israeli election (March 17, 2015) when the political-diplomatic set-up in Israel becomes clear.

European Union diplomats who attended an event where US Secretary of State John Kerry gave an address, reported to Foreign Policy that Kerry told them about a warning he received from former President Shimon Peres and former Justice Minister Tzipi Livni. According to Kerry, they both told him that a vote by the Security Council on the Palestinian resolution would strengthen the Israeli right in general and Prime Minister Benjamin Netanyahu in particular in the upcoming elections.

The report, which inevitably led to criticism in Israel of Livni, not only disclosed US concerns that the Israeli right would form the next government, it also provided an assessment of how Washington is expected to respond if and when the issue is brought up for debate by the Security Council. The United States is convinced that direct negotiations is the best way to resolve the conflict, and Kerry even believes that the negotiations can be restarted from where they were left off. He said as much in a speech friendly to Israel, which he delivered to participants at the Saban Forum in Washington Dec. 7.

Thus, Washington believes that the solution to the Palestinian-Israeli conflict will be reached through negotiations and pre-agreed understandings, rather than through unilateral moves. Nevertheless, in his comments to the European ambassadors Kerry offered a transparent hint, which I believe the Palestinians heard loud and clear. If a right-wing government that opposes a renewal of the negotiations with the Palestinians is formed in Israel after the next elections, Israel cannot rely on a US veto in the Security Council. In fact, in such a case, there is even a reasonable chance that the United States would support a watered-down version of the proposal. (It is, by the way, also worth noting that both France and Luxembourg have expressed their dissatisfaction with the proposed draft resolution submitted to the United Nations, claiming that it is extreme and unilateral.)

Intense discussions held Dec. 19-20 in Ramallah, New York, Moscow and various European capitals focused on the question, if the vote in the UN is postponed, wouldn’t the Palestinians lose the momentum of the past few months, which resulted in almost all of Europe positioning itself behind them?

In a phone call Dec. 21 with Palestinian chief negotiator Saeb Erekat, who is currently in Moscow, he refused to reveal to Al-Monitor his position on the matter or any reservations he might have. Nevertheless, in an interview with the Ramallah-based Al-Ayyam newspaper, Palestinian Foreign Minister Riyad al-Maliki made it clear that the PA rejected Kerry’s request. “We discussed our appeal to the Security Council at the current time with Kerry and the degree to which it would impact the election results in Israel. We did not agree in our assessment of the situation,” Maliki said.

However, Al-Monitor has also learned that things are not so cut-and-dry, and that a final decision has yet to be made. In fact, the Palestinian leadership is closer to deciding on a postponement of the vote. This postponement would be explained by the anticipated change in the Security Council’s roster in 2015, rather than as a result of US pressure. The new UN Security Council is expected to be more supportive and convenient for the Palestinians.

Yasser Abed Rabbo is a close confidant of Palestinian President Mahmoud Abbas. He is also an outspoken proponent of postponing the vote in the Security Council, believing that there is no way to pass the resolution now, and that the damage this would cause to the Palestinians’ reputation among the international community is far greater than any benefits it might incur. Meanwhile, as the Palestinians wait for the eleventh hour, or more precisely, until the Security Council goes on its Christmas and New Year’s recess, they are engaged in a nerve-racking game to win future support, if they do in fact succumb to pleas that they postpone their bid.

The truth is that the Palestinians have nothing to lose. They are not being asked to postpone their bid for many long months or even years, and Abbas is not being asked to adapt himself to some uncertain Israeli calendar. Elections in Israel will take place in less than three months, and once they do, everything will be clear, comprehensible and apparent to all. Even if Netanyahu is Israel’s next prime minister, the push toward Palestinian statehood is inevitable.

The Palestinians have already succeeded in setting a process in motion that has won them international support among many European states. Sweden and France among others have even signaled symbolically that they recognize the Palestinian state. The momentum that the Palestinians claim to fear losing will not disappear in such a short time. On the contrary.

The claim that the Palestinians are unwilling to operate on an Israeli clock seems surprising. Isn’t Israel a component that must be taken into consideration in any diplomatic maneuvering, even if it is completely cut off from any direct negotiations?

Over the past few years, Abbas has repeatedly made it clear that he is turning to the United Nations because he has run out of options. He claims that he was unable to make progress in the negotiations because of Israel’s refusal to compromise. On the other hand, if Israel shows signs that it is interested in ending the conflict, he will always prioritize negotiations and would be willing to put on hold the PA’s diplomatic moves in the United Nations. He expressed his support for negotiations on several occasions, including for instance to a forum of Israeli peace movements, which met with him in May at the Muqata headquarters in Ramallah.

Now is the time to keep his word. Abbas must prove that he understands that the current, unilateral move in the UN is a mistake, not only because he has no chance of passing it in the Security Council right now, but also because it stands in direct opposition to his statements of the past. It is hard to tell what opportunity awaits the Palestinians after March 17, but they only have to wait three months to find out. In the context of the Palestinian-Israeli conflict, this time lap is really insignificant.