Palestinian leadership made a point of not reacting to the Israeli election campaign, but after Prime Minister Benjamin Netanyahu's victory they might again try the UN route, with more international support than last time. 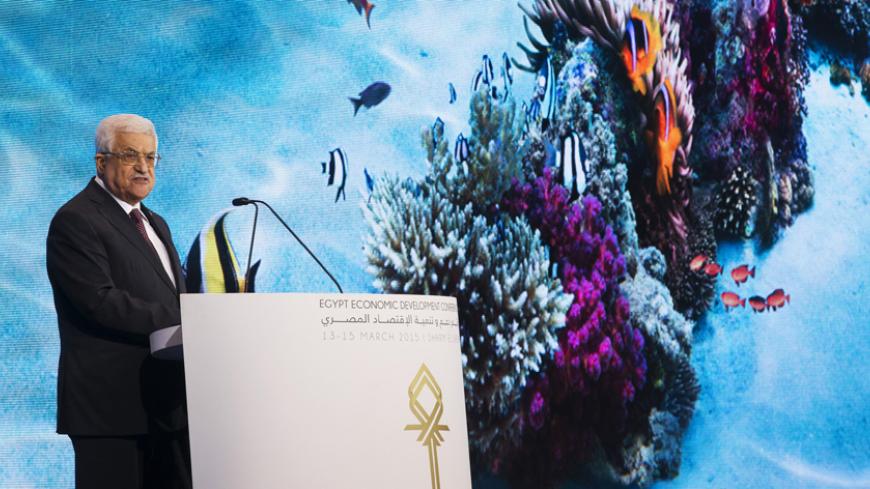 During the monthslong Israeli election campaign, Palestinian President Mahmoud Abbas and other senior Palestinian officials maintained absolute radio silence. They were worried that any comments they might make in support of Zionist Camp leaders Isaac Herzog and Tzipi Livni would boomerang against them among the Israeli public. While they were quite open about their support for the Joint List — a unified slate of predominantly Arab parties — when it came to the campaign in general, they were careful not to show any involvement in “Israel’s internal affairs.”

Obviously, everybody knew what the significance of a large Arab party in the Knesset would be, and whose interests it would serve. On the other hand, what could possibly be so extraordinary about the Palestinians expressing solidarity with the Palestinian Arabs in Israel?

At the time, no one even imagined that Prime Minister Benjamin Netanyahu would exploit the fact that Arabs were voting to intimidate right-wing voters and bring them out to vote for him. Given Netanyahu’s stunning victory on March 17, the response from Nabil Abu Rudeineh, spokesman for the chairman of the Palestinian Authority (PA), actually seemed rather laconic and restrained: “It doesn’t matter to us who the prime minister of Israel is. What we demand from every government is recognition of a two-state solution and of East Jerusalem as the capital of the Palestinian state. We will continue to work with any Israeli government once it recognizes the international community’s resolutions on the matter.”

In contrast, the response of Saeb Erekat, chief of the Palestinian negotiating team, was a better expression of the real feeling in the Muqata, the Palestinian headquarters in Ramallah. “It is clear that Prime Minister Benjamin Netanyahu will form the next government, so we say clearly that we will go to the International Criminal Court in the Hague and we will speed up, pursue and intensify,” he said. But the bad feeling over the Israeli election results was quickly replaced by intense optimism. The Palestinians are now convinced that Netanyahu handed Abbas a Palestinian state on a silver platter.

The Muqata derives its encouragement from the response of US President Barack Obama to Netanyahu’s statement during the campaign that he disavows his Bar Ilan speech and the principle of a two-state solution.

It is true that Netanyahu tried to moderate the impact of his remarks in an interview he gave to NBC the day after the elections, but the Palestinians believe that the die has already been cast. That is why, as far as they are concerned, they must take advantage of the momentum and immediately renew their efforts to establish a Palestinian state via the United Nations, in the hope that this time they receive the support of Washington (even if only through a silent abstention). In other words, there is the impression that a single declaration by Netanyahu in the midst of a turbulent election campaign let the cat out of the bag. Potentially, it could win the Palestinians everything they failed to get in 2014, despite all their efforts.

Abbas and his staff couldn’t hope for anything better than Obama stating openly that, in his opinion, Netanyahu isn’t really interested in a Palestinian state. According to White House officials, Obama went so far as to note that the United States might have to "reassess" its Middle East policies and see what options remain available.

Obama’s comments were received with considerable satisfaction in the Muqata. The Palestinian leadership there believes that Washington’s implicit support, or even just its realization that the Palestinians have no other choice, can help to advance this position among the other members of the Security Council.

When combined with all of the above, the election results in Israel do not really leave Abbas with any other options. By its very definition, the PA is a temporary entity created by the Oslo Accord as an interim stage leading to the creation of some future Palestinian state (within five years of the signing of the agreement in the White House in 1993). Almost 22 years have passed since then. If Abbas fails to raise the gauntlet now and pounce on the opportunity, there is no way that his regime can survive. In fact, it is already obvious that the chances of the PA surviving for long are slim at best. As of now, the Palestinians are running out of cash, and the government can’t pay the salaries needed to ensure that its basic institutions continue to function.

It is worth remembering that Israel has frozen the Palestinians’ tax money since December 2014 in response to the PA’s request to join the International Court of Justice in the Hague. Since then, the Palestinians have been waiting for the election campaign to end, so that Israel would release the money. Now, however, it seems quite clear that if they pursue a unilateral diplomatic course, not only will Israel refuse to release the funds, it will also increase sanctions on them. The Palestinians know that this is why they must ensure they have a protective cushion of international economic aid and support, before they launch any campaign to win UN recognition. Only once that is in place can they approach the Security Council.

What does this say about Israel? Is UN recognition of a Palestinian state necessarily a failure by Israel? Given the situation that has emerged, I am not at all sure about that.

I have written here before that the facts on the ground created over the past few years in the West Bank have eliminated any real chance of separation. It is no longer practical or politically feasible to expect the two nations to go their separate ways. From the very beginning, the establishment of settlements was intended to block any attempt to transfer land to the Palestinians. Israel’s political leadership will not receive public support for the dismantling of settlements in the West Bank, regardless of whether it is a right-wing government or a center-left one. While the 2005 disengagement from Gaza can be claimed as a precedent, it is in no way comparable to Judea and Samaria. Then there is the demand for the partition of Jerusalem, which the Palestinians consider to be an essential prerequisite for any future agreement. Of course, the fact that the Palestinian leadership is split between Fatah in the West Bank and Hamas in Gaza also makes it impossible to even contemplate separation.

As such, the establishment of a Palestinian state by the United Nations without any agreement or Israeli concessions is the least of all possible evils. It is the default choice. While such a move might perpetuate the conflict for many years or even decades to come, it seems that under the current circumstances, there is simply no other choice left.