In an interview with Israeli journalist Ilana Dayan, President US Barack Obama warns that the international community has ceased believing in Israel's willingness to negotiate peace. 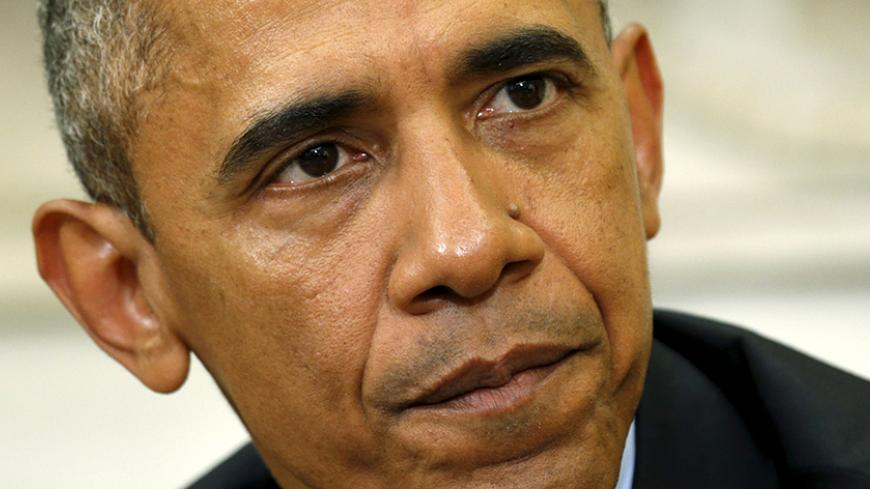 US President Barack Obama pauses while speaking during his meeting with US Attorney General Loretta Lynch in the Oval Office of the White House in Washington, May 29, 2015. - REUTERS/Kevin Lamarque

The importance of the interview that US President Barack Obama gave to Israeli journalist Ilana Dayan of Channel 2 lies not in the headlines it provided, but in the fact that it offered a clear view of the inevitable demise of what's left of the diplomatic process with the Palestinians.

Obama warned that in the future it will be harder for the United States to defend Israel in the United Nations. This was the first time that the Israeli public received a firsthand account of how deep the crisis between the two countries really runs, but even then, it remains doubtful whether the president’s frank and agonizing comments sent their intended shock waves through the Israeli public.

The interview aired June 2, the same day that the Home Command conducted a huge drill and exercise designed to simulate a missile attack on Israel. In the background that same week, there were harsh headlines about the spreading delegitimization campaign against Israel. It has affected everything from soccer's governing body FIFA (debating a Palestinian request to suspend Israel from the organization) to the British Students Union, which formally decided to adopt the principles of the boycott, divestment and sanctions (BDS) movement against Israel. Of course, none of that really helped Obama to get his message across.

It seems as if all the masks have been removed and all the cards are on the table. Prime Minister Benjamin Netanyahu was elected to a fourth term, not because he's a popular leader, but because he was able to make Israelis feel as if he is the right man to ensure their safety in a region so full of threats. Obama, who will finish his second term in a year and a half, never really managed to connect with the Israeli public and engage it in a direct relationship, like former President Bill Clinton. Israelis were wary of Obama from the moment he was elected, and their trepidation was only reinforced by Obama’s 2009 Cairo speech. After that, Obama was perceived as someone watching out for Muslim interests in the world.

It didn't matter how much Obama really showed his concern for Israel’s security, by paying for the Iron Dome air-defense system for example. He still failed to convince Israelis that he's completely on their side. Based on what he said in his interview and the way he said it, even Obama now realizes that he will never be able to do this. Certainly not after Netanyahu was elected to another term — and given the narrow right-wing government in place, coupled with the fact that there is no diplomatic process whatsoever on the horizon.

That is why people came away with the impression that Obama finally feels comfortable enough now to put an end to the masquerade once and for all. He did it in his signature way, using a restrained but fastidious approach, with the experience of six years in the White House behind him. In the interview, he made a clear distinction between America’s commitment to the security of Israel on the one hand, and on the other the settlements, which will make it impossible for the United States to continue defending Israel in the United Nations. He went on to explain how serious Israel’s situation is in the international arena, when asked about Netanyahu’s conflicting statements before and after the election about his commitment to a two-state solution.

“The danger here is that Israel as a whole loses credibility. Already, the international community does not believe that Israel is serious about a two-state solution,” Obama said.

Although he spoke about the State of Israel, it was obvious to everyone that he was pointing a finger at Netanyahu, a man he described as having a pessimistic worldview, and who uses the politics of intimidation to survive. “I think that Netanyahu is skeptical about the capacity of Israelis and Palestinians to come together on behalf of peace,” said the president, “I think that he [Netanyahu] is also a politician who's concerned about keeping coalitions together and maintaining his office.”

He said, “I am less worried about any particular disagreement that I have with Prime Minister Netanyahu. I am more worried about Israeli politics that's motivated only by fear. … And so I do think that, right now, those politics and those fears are driving the government’s response. And I understand it. But my argument has been — directly to Prime Minister Netanyahu and I think publicly — is that what may seem wise and prudent in the short term can actually end up being unwise over the long term.”

More than six years after entering the White House, Obama is a much wiser president when it comes to Netanyahu and the peace process with the Palestinians. He sounded like someone who understands that the Israeli prime minister has no intention of engaging in an effective diplomatic process, and was therefore trying to explain directly to the Israeli public what the consequences of such a policy would be.

Until this current government was formed, Netanyahu was able to juggle all of the different fronts, leaving the impression that there was a diplomatic process. On occasion, he was even able to convince people that his intentions were sincere. In that sense, he even caused some Israelis to believe that he has crossed the Rubicon, just like Prime Ministers Yitzhak Rabin and Ariel Sharon before him, that he had undergone a transformation, and that he recognized how critical it was to reach an agreement. There was his 2009 Bar Ilan speech and his partnership with former Prime Minister Ehud Barak during Netanyahu's second term. In his third term, there was partnership with former Minister Tzipi Livni, who participated in Secretary of State John Kerry’s efforts to bring about a breakthrough. All of this gave the illusion that things were really happening on the diplomatic front.

It now seems that with his fourth government, Netanyahu has run out of tricks to drag things out. Obama made it quite clear that he has caught on and realizes this. All that's left for him to do is to explain to the Israeli public what long-term implications the freezing of the diplomatic process would have on the Jewish character of the State of Israel.

Nevertheless, it's doubtful that the American president’s comments will soak in deep enough to instigate change. These days, Israelis have a tendency to interpret the diplomatic struggle against Israel, including the BDS movement, as an anti-Semitic assault on them. Of course, this plays well into the Netanyahu’s narrative.

Though Netanyahu did not respond to Obama’s comments in the interview, he said, “Challenges are constantly mounting all around us — inter alia — by missiles and rockets, almost all of which are supplied by Iran. When it comes to Israel's security, I rely, first of all, on ourselves.''

It's obvious what he meant, as is Netanyahu’s attempt to get the Israeli public to forget who provides the rockets that protect us.