Is Netanyahu sacrificing Israel on his crusade against Obama?

Prime Minister Benjamin Netanyahu knows that Israel will pay, diplomatically and politically, for its over-the-top response to the anti-settlement UN Security Council resolution, but it seems he doesn't care. 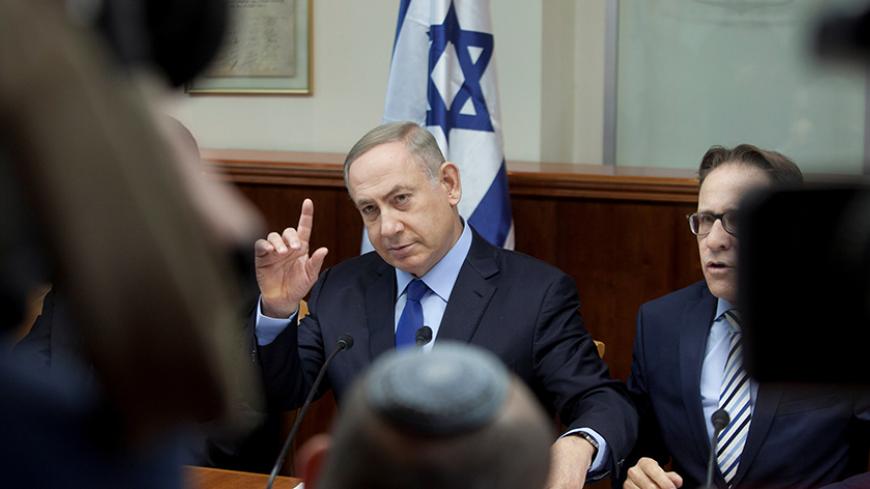 Top officials in the US administration, most notably Secretary of State John Kerry, must have spent Dec. 26-27 in regret and licking their wounds. After all, they agreed to accept the credentials of Israel’s Ambassador to Washington Ron Dermer in 2013. Of course, this came after an energetic campaign and a whole slew of promises by Israel and by Dermer himself. Dermer finally persuaded Kerry to accept him (despite his closeness with senior Republicans) over a private dinner in Washington between just the two men and their wives. Dermer promised Kerry the world, swearing to do everything he could to tone down Israeli Prime Minister Benjamin Netanyahu, to avoid unnecessary spats with the White House, and to create a direct, intimate and honest channel of communication between the president and the prime minister.

This week, that same Dermer was interviewed by at least two major American news networks, CNN and MSNBC, in which he did everything but curse out President Barack Obama and his advisers. His behavior was unprecedented. It was the first time that a serving Israeli ambassador launched a full frontal assault on an American administration still in office, on American soil.

Dermer had all sorts of deprecating terms to describe the US administration, including “runaway train." He claimed that Israel had incontrovertible proof that the United States itself was behind the initiative that led to UN Security Council Resolution 2334 against Israel’s settlement policy Dec. 23, and that Israel would present this evidence to President-elect Donald Trump’s staff once the new administration takes office. Meanwhile, the United States has evidence that Israel already presented its evidence to Trump’s staff, including his son-in-law Jared Kushner.

Meanwhile, the Americans are furious that the Israelis already used Trump for their own ends after the Egyptians presented the first draft proposal of the resolution to the Security Council. They say that Trump called Egyptian President Abdel Fattah al-Sisi and convinced him to withdraw the draft. According to Israeli sources, Obama’s staff was outraged when it realized what Israel had done. As far as administration officials were concerned, Israel had crossed another red line, and in a particularly brusque manner at that. The Israelis were working with the Trump administration before it even took office. They were going over the head and behind the back of a serving American president.

Just one day later, two other members of the UN Security Council, Senegal and New Zealand, submitted their proposal. The United States abstained, for the first time in Obama’s presidency, and did not veto the resolution. Israel suffered a devastating blow. The Security Council resolution could worsen Israel's standing in the international arena. It was a bitter parting gift from Obama, the exact scenario that Netanyahu worried about more than anything else over the past year — as was described in several Al-Monitor articles.

The relationship between Washington and Jerusalem has never seen such an extreme, belligerent low point in the modern era. And it didn’t end with Dermer either. The ambassador’s boss, Benjamin Netanyahu, called America’s behavior “a disgrace,” going so far as to say that the administration had stabbed Israel in the back. “They betrayed us,” Netanyahu said, according to a senior political source who spoke with Al-Monitor on condition of anonymity. Netanyahu also told his Cabinet that during one of his many phone calls with Kerry in the week preceding the vote, “Friends don’t take friends to the Security Council.” Yuval Steinitz, a minister with particularly close ties to Netanyahu, said, “The Russians would never betray an ally like that.” Of course, Steinitz never explained why he didn’t have harsh words for the Russians too, especially since they voted for the Security Council resolution, while the United States had just abstained.

Many in Israel, including sources in Netanyahu’s own party, believe that the prime minister lost control — not only of himself but of the entire situation. His behavior as a result of the Dec. 23 decision has been described by a political source close to him (who spoke on condition of anonymity) as “rapture of the deep,” using a diving term to describe the drunken behavior that divers experience when diving too deeply. Netanyahu immediately set off on a campaign to punish the offenders, calling Israel’s ambassadors to Senegal and New Zealand back home for consultations. He canceled a meeting with British Prime Minister Theresa May and a visit by the Ukrainian prime minister to Israel, instructed his ministers to curtail their visits to countries that voted in support of the resolution (including Britain, France, etc.), announced that his government would no longer provide financial support for various UN bodies and suspended in part relations with a long list of countries. Netanyahu is acting like the leader of a major power, with the whole world hanging on his every whim as it waits for his latest pronouncement. In other words, he is oblivious to reality. The question is whether he really believes in this alternative reality that he created for himself, or whether this is some cynical, cold and calculated political maneuver.

Conventional wisdom is that Netanyahu knows exactly what he is doing. It is a perfect imitation of what Trump did over the last year. He is lashing out at all norms, spitting at political correctness, breaking all the rules of the game and denigrating anyone who isn’t him.

Netanyahu knows that a criminal investigation would probably be launched against him in the near future, as a nine-month-long police probe comes to an end. He knows that he will need the support of his constituents, so he is bolstering his standing among the public. The steps that he has taken so far have been embraced enthusiastically not only by his supporters but by the Israeli right in general. This sense of national pride, self-confidence and fighting back with full fury was always associated with the Israeli right. Netanyahu is simply fanning the flames, and he is doing it in a frenzy. He knows that Israel will pay, politically and diplomatically, for his over-the-top response, but he simply doesn’t care.

Netanyahu gives the impression that he is enjoying every minute of this. It seems as if his son Yair has been updating him around the clock about the huge wave of fervent support across the various social networking platforms, giving Netanyahu cause to proceed full steam ahead. On Christmas Day itself, he ordered the Foreign Ministry to summon the ambassadors of the 12 countries that voted against Israel for a dressing down. Even popular American Ambassador Dan Shapiro was summoned to Jerusalem — though in his case, it was for a private talk with the prime minister himself rather than some esoteric reprimand in the Foreign Ministry. Shapiro has seen just about everything during his term in Israel. According to a source in his inner circle who spoke to Al-Monitor on condition of anonymity, he later said, “It was unpleasant, but it’s part of the job.”

With all of this going on, the government failed to invest its attention or energy into discussing the actual problems resulting from the Security Council’s resolution against the settlements. Will Israel charge full steam ahead toward the impending iceberg? It seems as if it will. And as it inches closer and closer, the orchestra will only turn up the volume. The party on deck is reaching a new crescendo.