US and Israeli experts say that an agreement with Iran is not imminent, yet Prime Minister Benjamin Netanyahu insists on going ahead with his planned Congress speech, while damaging Israel's strategic relations with the United States. 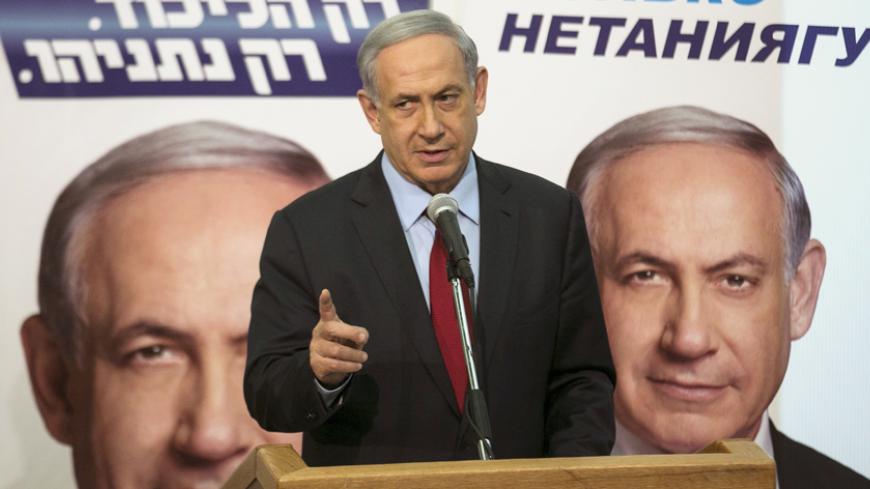 Prime Minister Benjamin Netanyahu has maneuvered himself into a dangerous trap, just as he always does. If he gets off his high horse now by canceling his appearance before the US Congress, he will become the butt of jokes and an embarrassment in the Israeli political arena. If he insists on going, despite the fervent opposition of just about everyone, he could deal the final blow to his relationship with the Obama administration, which could result in immediate punitive actions. For now, Netanyahu still insists on going, even though one leader of the Zionist Camp, Knesset member Shelly Yachimovich, told me Feb. 7 that if Netanyahu abandons his speech before Congress, her party promises not to attack or mock him for that.

Meanwhile, the conflict between Netanyahu and US President Barack Obama reached Hollywood proportions Feb. 9, when each of the two men addressed the issue publicly at almost the same time. Netanyahu was speaking at an election event for the Likud Party. Obama was giving a news conference in the White House with German Chancellor Angela Merkel.

While Netanyahu announced that he's determined to go to Washington and address Congress March 3, and that while a bad agreement with Iran is taking shape, people are focusing on protocol, Obama commented on Netanyahu’s intentions: “What’s the rush? Unless your view is that it's not possible to get a deal with Iran and it shouldn't even be tested. … I don’t accept that.”

Obama added that he would not meet with Netanyahu during his visit, because the practice is not to meet with foreign leaders right before elections in their countries. “As much as I love Angela,” he said, “if she was two weeks away from an election, she probably would not have received an invitation to the White House, and I suspect she wouldn't have asked for one.”

Earlier that day, Reuters reported that the possibility of making changes to Netanyahu’s speech was being examined, including holding the event behind closed doors, without media coverage, to calm the air and reduce interest and the ensuing commotion. While this report was denied, there can be no doubt that the people surrounding Netanyahu are fully aware of the enormous damage caused by this initiative, which began with an invitation to Netanyahu from US House Speaker John Boehner behind the Obama administration’s back. On Netanyahu’s side, there are still a few sane individuals looking for a ladder that will allow him to climb down from his plan to stab Obama in the back. They are trying to find an elegant way for him to walk away from his speech to Congress. The problem is that abandoning this defiant visit to Congress may help US-Israel relations, but it will also harm Netanyahu’s chances in the March 17 elections.

As a master of illusion, Netanyahu built himself a Hollywood movie plot in which he’s a kind of “Superman,” who has come to save Israel and the world from the villains plotting against it. This speech before Congress will be presented in Israel as Netanyahu standing up on behalf of the free world against the “weak and lazy” — Obama — who want to surrender to Iran.

Netanyahu has been soaring in the polls ever since he put the Iranian issue back on the agenda in Israel. He eliminated the slight advantage enjoyed by Isaac Herzog and Tzipi Livni and is considered, yet again, the person with the best chances to win the election. His relationship with Obama could go up in smoke, as far as he is concerned. The problem with Netanyahu is that for now winning the election is his top priority. Yes, it's even more important than Israel's national security or the slim chances of him rehabilitating at least something of the trust between himself and Obama, and even the chances of obtaining a two-thirds majority in Congress to overrule the president’s veto — in case of a vote on sanctions against Iran.

Ever since the invitation to Netanyahu to address both houses of Congress first became public, the chances of achieving such a majority have diminished, not gotten any stronger. But part of the Israeli public doesn’t realize this. Give Israelis a determined, eloquent, charismatic spokesman, prepared to defy the entire world by standing up against the ultimate evil, and they’ll take it.

On Feb. 10, a senior Cabinet member who spoke on condition of anonymity told me: “There is no doubt that as a matter of fact Netanyahu is correct in when it comes to his position regarding the agreement taking shape with Iran. However, in practice, he is doing everything to cause us to fail. He is acting cynically, from political motives, and causing enormous damage to himself and to our relationship with the United States.” When I asked him why he does not come out publicly with his criticism of Netanyahu, he said: “Right now, that is impossible politically. He has managed to misrepresent the situation to the public, and we are right before an election.”

The recent weeks of the Israeli election campaign have been extraordinarily frenetic. On Feb. 9, Netanyahu decided to take the unprecedented step of attacking Arnon Moses, Israel’s most important publisher (owner of a powerful media empire with its flagship Yedioth Ahronoth newspaper and its popular website Ynet).

In a furious Facebook post, Netanyahu accused Moses of “trying to take him down,” and of attempting to shut down Yisrael Hayom, the free newspaper identified with Netanyahu — and funded by his patron, casino mogul Sheldon Adelson. That same day, Nahum Barnea, a senior commentator for Yedioth Ahronoth, told Israel Radio Kol Israel that Netanyahu “should be institutionalized,” and that, “There is something defective about the way he considers his decisions.”

Netanyahu’s discretion is a “hot” topic of conversation in many other places, too. In the defense establishment, for instance, many senior officials are distraught as they see the damage that Netanyahu is causing to the relationship with the United States. And the Foreign Ministry is not lacking in senior officials stunned by the panic attack that struck Netanyahu when he could smell his impending defeat in the elections, at least until two weeks ago, and started to “go wild.”

In secret contacts over the last few weeks between senior Israeli and US officials, the Americans have reiterated again and again: “The agreement with Iran is not finalized. There are still large gaps. There is no urgent reason to come to Washington now. We have no idea where you came up with the assessment that the deal has been completed and is soon to be signed. That is not and was never the case.”

Nevertheless, Israeli intelligence agencies are far more pessimistic. The Intelligence Corps of the Israel Defense Forces warns that the powers could reach a “bad agreement” with Iran in just a few weeks. While the Mossad is more skeptical, they are also concerned. In contrast, the Foreign Ministry believes that an agreement is still far off.

Meanwhile, all of these bodies are deeply concerned about the relationship with the United States and the record lows in that relationship. This is leading to a complete break between the White House and the Prime Minister’s Office. During the two years remaining of the Obama administration, Israel could pay a steep price for the “lesson” that Netanyahu is now giving to the US president.

In contrast, the Americans watching all of this unfold can’t entirely believe what they see. As of now, they are trying to “break the axis running between Adelson, [Ambassador Ron] Dermer, and Boehner.” Israel has already received hints that if it wants its diplomatic representative to have any access to the White House whatsoever, it will have to replace the current ambassador.

But Netanyahu wouldn’t even consider replacing Dermer without the explicit approval of his real master — Adelson.

To relay messages to the White House, Netanyahu must use his national security adviser Yossi Cohen of the Mossad or his personal lawyer Yitzhak Molcho. Unlike in the past, even these two people are hardly considered especially welcome in the White House. But when there is no other option, Netanyahu uses them.

“As of now,” a senior security official told me this week, “in everything that has to do with our relationship with America, we’ve traded places with Iran. We’ve become the ‘bad boy,’ whereas the Americans have at least some kind of hope for the future, when it comes to Iran.”

Obviously, this statement is highly exaggerated. The security relationship between Israel and the United States is still considered especially tight. When it comes to personal relationships, though, ties between the leaders and diplomatic cooperation looks a lot like Kobani in Syria, with charred ruins, rivals suffering from fatigue and a dismal future.

If Netanyahu wins the Israeli election, and the chances of that happening are particularly high now, the feud between him and Obama could escalate into all-out warfare.