Prime Minister Benjamin Netanyahu spoke eloquently to Congress about Iran and the reception he received was warm, but now he has to win the support of an Israeli electorate struggling financially and increasingly alienated from him. 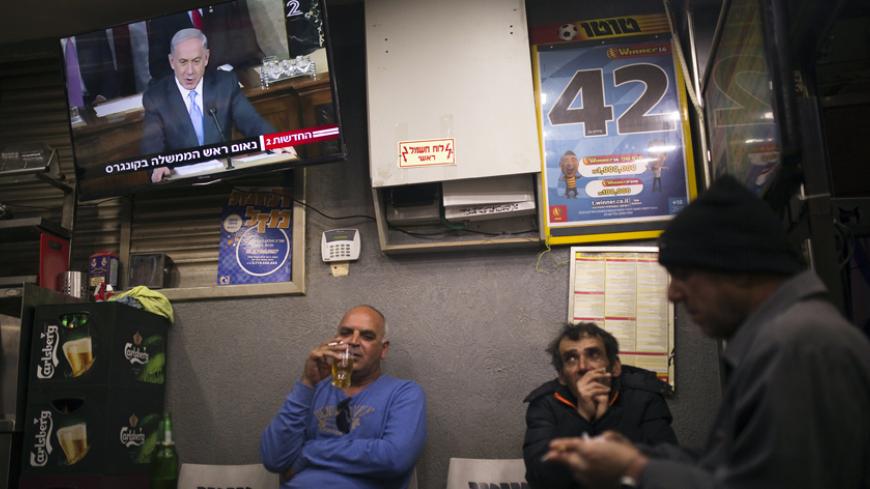 People sit under a television broadcasting Israeli Prime Minister Benjamin Netanyahu's speech to the US Congress at a kiosk in the southern city of Ashkelon, March 3, 2015. - REUTERS/Amir Cohen

The issue of whether Prime Minister Benjamin Netanyahu’s March 3 speech to Congress halted, or at the least delayed, Iran’s nuclear program reminds me of something said by Thomas Pickering, the senior US diplomat who served as undersecretary of state during the Bill Clinton administration and before that as ambassador to the United Nations, Russia, India and Israel. “The problem with you Israelis,” he told me sarcastically, “is that you lack sensitivity to nuance.” He was referring to the harsh criticism that senior members of the US administration, himself included, had leveled against the settlement enterprise through diplomatic channels and occasionally in public.

Any other country — or one might say, any “normal” country with a population of about 8 million — would not dare to provoke the president of a superpower with more than 320 million people. A reasonable leader of a country whose army is equipped with American weapons and whose diplomacy relies on the veto power of the United States would never wager his free pass to the White House. On the other hand, considering the polling results shortly before the prime minister's trip to Washington, it would appear as if the people of Israel had heard only a feeble echo of the shrill cries in opposition to the speech coming from the White House, Democratic Party representatives in Congress and broad swathes of the American Jewish community. Here are a few of the "nuances" that got lost in the commotion surrounding the speech.

First, when the prime minister of Israel says that it would be better if the negotiations between Iran and the five permanent members of the UN Security Council plus Germany (P5+1) end in failure, instead of with the signing of the “very bad agreement” that the parties are supposedly assembling, he is actually helping Iranian President Hassan Rouhani sell the agreement in Iran. In the zero-sum game being played between Israel and Iran, conservative opponents of the agreement in Tehran would have a harder time accepting a deal praised by Israel than one that Netanyahu argues is a bad deal. According to Netanyahu’s own logic, what is bad for Israel is good for Iran and vice versa.

Second, let us assume for a moment that the Democratic Party will forgive Netanyahu for humiliating President Barack Obama and will vote with the Republicans for additional sanctions against Iran. Even then, who can ensure that other nations in the negotiations will follow the United States' lead?

Third, if, as Netanyahu claims, the P5+1 conclude that postponing the risk of an Iranian nuclear bomb by ten years is sufficient, then his “success” in blowing up the agreement could lead to the dismantling of the coalition now imposing sanctions on Iran. Furthermore, if the United States ignores the positive recommendations of experts from the International Atomic Energy Agency concerning supervisory mechanisms for Iranian nuclear facilities, Tehran could decide to withdraw from the Nuclear Non-Proliferation Treaty.

All of this involves “nuance,” much like “peace” with the Palestinians. Unlike Netanyahu’s previous speech to Congress, in which the word “peace” was mentioned 64 times, this time it did not even merit lip service. All that mattered was that the speech be eloquent and that the reception before, during and after it be warm. On the day that the political parties in Israel could officially begin airing campaign ads on TV (during a regulated broadcast window), Netanyahu got precious air time for free. He used the opportunity to address the Israeli voter over the heads of the media, which until then had been attacking him for sneaking up to Capitol Hill behind the president’s back.

It was Netanyahu’s finest hour since Manny Naftali, the former house manager of the prime minister’s residence, became a household name in Israel after filing suit last year against the Netanyahus for labor misconduct. On the other hand, after a very pleasant hour in Washington before Congress, Netanyahu must now return to the podium at election rallies in the towns of Kiryat Gat and Or Akiva to try to reverse his decline in the polls. The significant base of undecided voters in Israel — some 20%, according to surveys — has heard more than enough about Netanyahu’s fight against a nuclear Iran. He will now be forced to explain to the voters back home why, after six years of Likud rule, they don’t even have money to buy sunflower seeds to snack on during the Saturday soccer game.

If, despite everything, voters grant Netanyahu a third consecutive term, they will get a prime minister who will go down in history as the only world leader to have seemingly been declared persona non grata by two US administrations, one Republican, the other Democratic. The first occasion involved James Baker, secretary of state under George H. W. Bush, barring Deputy Foreign Minister Netanyahu from entering the State Department after Netanyahu said, “American policy in the Middle East is based on lies and distortions.” Netanyahu might be only the second leader, after Britain's Winston Churchill, to appear before both houses of Congress on three separate occasions, but considering the scolding he has been receiving from the White House and senior Democratic members of Congress over the past few days, if he is elected premier for the fourth time, Israeli voters will get a leader possibly only able to see the White House from the outside for the next two years.

Obama emphasized that relations between the two countries remain as close as they have always been. “The depth of Israel-US relations,” he told Reuters, not “the relations between myself and Prime Minister Netanyahu.” Based on briefings to American correspondents by senior administration officials, one can interpret these recent statements as “Even an ungrateful prime minister such as Netanyahu cannot spoil the strong alliance between the two countries.”

In any case, having learned a lesson from the congressional speech affair, it seems that the Obama administration has decided to selectively withhold information from Israel concerning the Iranian nuclear talks. Even casino mogul Sheldon Adelson (considered close to Netanyahu) would surely not bet on the assumption that Obama will undoubtedly veto any future UN Security Council resolution proposal by the Europeans on the establishment of a Palestinian state based on the 1967 borders. Bad chemistry between the prime minister of a small country and the most important person in the world is not a matter of nuance.